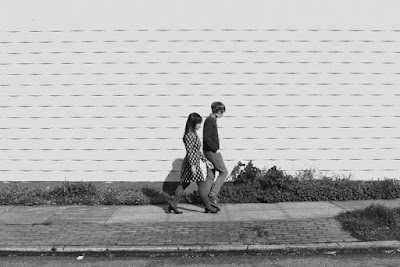 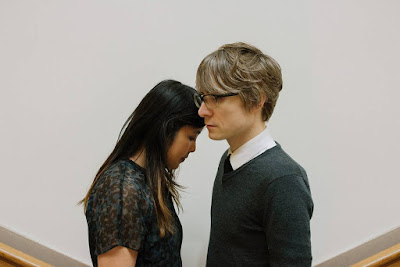 Q. When did Tiny Fireflies started, tell us about the history...
This is a long story, that we tend to mess up. So here's a link to our bio that articulates it pretty well: http://www.tinyfireflies.com/about/

Q: Who are your influences?
K: We have an insane amount of influences, that may or may not inform our sound. We both like Joy Division/ New Order, which is the reason why we started this project in the first place. I developed my songwriting style from listening to Tori Amos as a child.

L: Blonde Redhead I think is a good one to mention as well. I think we've learned a lot from their recent records about how to keep things minimal, but still interesting. Every part of their songs always feels very intentional, and that's something we've tried to work on.

Q. Make a list of 5 albums of all time…
K: Lisle and I have varying tastes in music, so we wouldn't be able to collectively agree on a top 5 together. This is a really hard question to answer. The way I 'm looking at it is, "here are the first 5 records I would not be able to let go of if asked to purge my collection." I'm not sure if this is an 'all time' list though, but here goes: Talking Heads: Speaking in Tongues, Blonde Redhead: 23, Devo: Are We Not Men? We are Devo! The Marvelettes: S/T,
Yo La Tengo: Fakebook

L: I'm equally bad at this question, because I really don't see things in absolute terms like this. If you asked me this in high school, I would have a completely different list. Even if you asked me a couple years ago, I would still probably have a different list. Some albums that have stood the test of time on my list include: Björk's Vespertine, John Cale's Paris 1919, Beach Boys Today!, The Beatles' Rubber Soul, and Ellie Greenwich Composes, Produces and Sings

Q. How do you feel playing live?
K: I very much enjoy it. I was performing ever since I was a child, so I feel like it comes naturally to me. It's always interesting to see how people react to seeing us play.

L: Recently, I've been wishing we had a car so we could take more gear to gigs. We're in the process of trying to figure out ways to improve our live show. Our live bass player, Brian, has helped tremendously with this, but there's always room for improvement. The newer songs we've been working on don't have as much guitar on them, so I need to find some ways to keep myself occupied on stage.

Q. How do you describe Tiny Fireflies sounds?
Voltage controlled oscillators, echoes of vibrating steel strings, breath, and speakers pushing the air at an average of 115 beats per minute


Q: Tell us about the process of recording the album?
K: We took some time off after Change to evaluate what we wanted to do with this project and how we wanted to sound. I had some life events that put songwriting on the back burner for a while, but in the interim, Lisle began learning more about and collecting analog synthesizers. This new found interest really helped develop the sound as the songs were coming together. I would say that the new songs we've been working on have taken a more minimalist approach to production. We've stripped down a lot of the layering we're used to doing. A lot of the songs only have 1-2 vocal tracks, which makes the vocals feel more exposed, which I think intentionally exposes the subject matter. And sonically, there's not as much focus on guitar and bass.

L: There's a shift in the drums as well. We've moved away from trying to make the drums sound anything like drums. Most of the newer songs have sounds coming from old drum machines.

Q. Which new bands do you recommended
K: I'll be the first to admit that I"m not as in touch with new music as much as I should be. The last band I got really excited about was Fear of Men. They're really wonderful.

L: I really love Kyary Pamyu Pamyu, but she doesn't really need my help with promotion. Just the other day, I heard a new band called "The Golden Eaves" which features members of The Pines and The Fairways. It's lovely stuff.

Q: Which bands would you love to make a cover version of?
K: I generally like mainstream pop music. I'm still trying to convince Lisle to do a cover of Sia's "Elastic Heart"

Q: What´s the plan for the future....
We're waiting to make big plans until we see where our new material takes us.

Q: Any parting words?
We're really excited about our new songs. Sorry it took so long.
*
*
*
Thanks