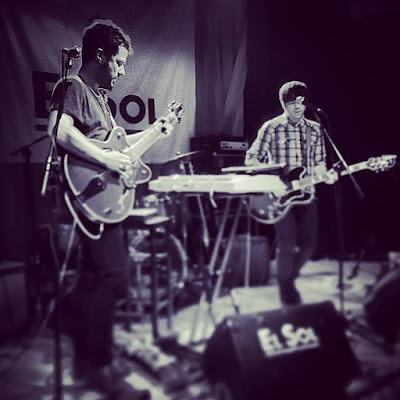 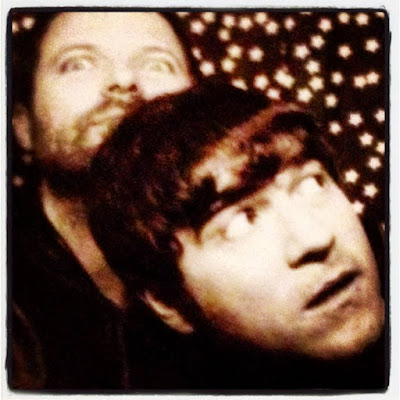 Q. When did Lost Tapes start? Tell us about the history...
We started 3 years ago or so.. We’re friends, we know each other since long time ago, because we play in other bands, so it’s easy to play in the same summer festivals or to be in the same city. We’ve had contact when we played in our different cities,etc. Exactly, I don't know the moment we decided to start this new project. I had old songs, different style to my other bands, so there was not space for them. So maybe in one of our meetings, me and Pau talked about to take this songs and do something together. Always it's exciting to start new things with new people. We had the same point of view about music also same taste for it.. It was so easy. We started to record songs in the Pau’s bedroom, kind of home studio, you know. So we've been working in the same way all this time, first Madrid, then Valencia, where Pau is living, right now.. Easy for me because, I’m living in a town close to Barcelona, so now it’s pretty close to me. I think from the beginning, we've always thought about this project, as something serious, not like a party time, not like a second band, you know..That makes us to work so hard to write better songs, each time.

Q: Who are your influences?
Well, we love music and whatever can influence us, also books and movies.. We like lot of kind of music! Also from the different periods, from the 60’s till our days.. Maybe it’s easy to find influences on our music, from the British pop bands from the 80’s and also indie American bands from the 90’s, because we’ve lived that time. We started listening music in that period so always it’s a strong influence when you play your music

Q. Make a list of 5 albums of all time…
That’s so difficult, there’re tons of great records of all time, I can give some, but maybe tomorrow I could give you, 5 different, you know

Q. How do you feel playing live?
It’s the best feeling ever, because it’s at the live shows where you can feel the feedback with the audience, every night it’s a different show.. So it’s so much fun, you know.. Maybe other people like to spend more time in the studio.. For us, shows are the best.. Last year we were on tour from March till June, doing USA coast to coast shows.. Also we played in many European capitals and many festivals

Q. How do you describe Lost Tapes sounds?
It’s just pop music, where we try to print, our music influences, from whatever period. But you can hear, clearly, those periods that we've lived, since the 80’s till our days


Q: Tell us about the process of recording the album?
Well it’s little bit unusual, because we’re 2 guys in the band and we’re not living in the same city, so maybe the process it’s little bit more complicated, I mean, it's complicated for our calendars.. About music, it’s still being easy. We talk everyday and we know, exactly what we want or like. Most of the time, songs are coming just with a voice note, literally! Then when we meet, we finish the songs. There’s not a big secret.. When we think, songs are cool and ready to be recorded, we do

Q. Which new bands do you recommended
Well most of the new bands that we’re listening are bands that have been playing with us or they’re friends.. Bands like: Literature, Funeral Advantage, Gold-Bears, Nic Hessler, Eternal Summer, etc etc

Q: Which bands would you love to make a cover version of?
In our first shows, we used to play “dream baby dream” of Suicide.. But we’ve been so busy recording our own songs and trying to play them.. Btw I’d love to do something different, you know.. Maybe a Backstreet Boys cover, who knows?

Q. What´s your plans for the future?
Future is here!! We are finishing our first album, so that’s so exciting! It will available next fall by Spanish record label, Mushroom Pillow.. But after the summer, Shelflife records (Portland, OR) will release another album of us, it’s a compilation of all of our singles and Ep’s.. In other hand, we’re working in new stuff, for new singles and songs for compilations.. And of course we’re looking forward to be on the road asap.. We want to play everywhere!!

Q: Any parting words?
Well.. Thanks a lot for the interview and pay attention in a really small band like us.. Muito obrigado.. de hope to play in Brazil someday!!
*
*
*
Thanks