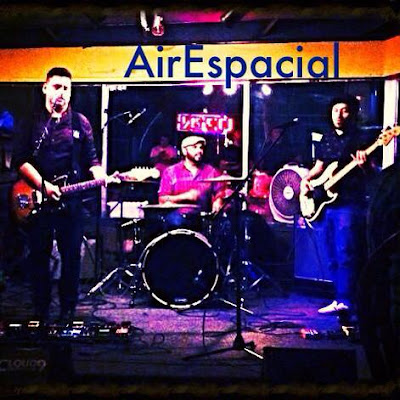 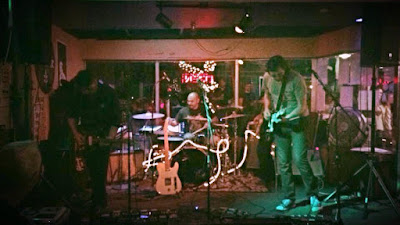 Q. When did Aire Espacial started, tell us about the history...
In 2009 it was started by Carlos (guitars/vocals) and Ivan (Drums) later on joined by Juan (bass) who happened to be Ivan's friend since they were young. We live in Fresno, CA a city located in the Central Valley. Mostly the band started as a necessity, I guess we were all tired of being in other bands that weren't doing anything interesting, and wanted to do something more ethereal and different. Really didn't knew if it was going to be an actual band or just a side project for jamming. But 5 -6 years later here we are, as a serious band, still trying to do interesting music. We don't know if we have actually done anything interesting yet, but keep on trying....

Q: Who are your influences?
Lots and lots! we are lucky enough to be influenced by our Latin culture, which in a way gives us the chance to mix lots of sounds. But as a more to bands that we enjoy are Cocteau Twins, Slowdive, Ride, My Bloody Valentine, Joy Division, The Cure, the Jesus and Mary Chain, Soda Stereo from Argentina, you know the classics that made us start in this genre. But we are always looking for new bands and music that certainly influence us as well. A place to bury strangers, m83, sigur ros, The horrors, Airiel just to mention some of the more well known from the new generation. It would be cynical not listen to new bands given that we are a new band , and that's exactly what we want ... To be listened to .... Spread our music

Q. Make a list of 5 albums of all time…
Don't know if this will be of all time, I guess the list always changes but albums that influenced our latest LP it would be:
Cocteau Twins - Heaven or Las Vegas
Smashing Pumpkins- Adore
Slowdive - Souvlaki
Soda Stereo - Dynamo
The Cure - Disintegration

Q. How do you feel playing live?
For us is always something kind of hypnotic, we love to improvise a lot and extend our songs, so we never know what kind of sounds are going to re-emerge in between the actual songs. We think we are a band with a lot of music chemistry among us 3 ... the sound that we create Is kind of a sensation of release of stress and other cool emotions

Q. How do you describe Aire Espacial sounds?
Rough... Melodic .... With a lot of space and atmospheric sounds. Flirts a little with pop and psychedelic stuff... But we always like to describe our sound as kind of "savage"

Q: Tell us about the process of recording the songs ?
Well for this new album we recorded all guitars, bass and synths sounds ourselves. All the drums and vocals with a recording engineer from here Fresno, CA named Eric Peters who also did the mixing and mastering at his studio. Our new album "Figuras Cosmicas" (which means Cosmic Figures) took almost two years to be completed. We wanted to take our time, and also was a way to spread our budget to record it. We stopped a lot during the two years to be able to complete it as good as possible, and to save some money by making it gradually. We also wanted to have a co-producer other than ourselves which Eric did an amazing job at it. We think it came out really good, we like it... and hopefully people like it to ...

Q. Which new bands do you recommended?
Uff there is lots of really good bands out here, we really enjoy Be Forest, Vibragun, Ringo Deathstarr, the sleepover disaster, Seasurfer, Flyying Clours to mention a few, we are probably forgetting more we like to mention and later on going to regret it. Please listen to new bands, there is really really really good ones out there.

Q: Which band would you love to made a cover version of?
This is a really hard question because we are always afraid of ruining a song .... lol ... Have lots of respect for the work of others. Always wanted to do a noise, space-shoegazy version of one of Gustavo Cerati or Soda Stereo songs. We'll do it some day probably. Who knows maybe even a Slowdive cover if we are brave enough...

Q: What are your plans for the future?
So far to spread out music to as manny places as possible and maybe hopefully go to some of those places to play live. We currently don't have a label, and if someone is interested we would like to work with one to be able to spread our music. We are also already writing new songs for our next work which probably is going to be an EP not a full album. Maybe with some English tracks on it since we live in the U.S. and is also part of our culture. But nothing is set in stone yet...

Q: Any parting words?
Thanks to "The Blog That Celebrates Itself " for considering us for this interview and to the readers you can find us in all the social networks that rule out world nowadays Facebook, Twitter, Soundcloud, etc.. Just search for Aire Espacial, and there will be links to our music and shows. Keep on supporting all the new and interesting projects out there...
*
*
*
Thanks