FireBomb with L.A. Drones - An Interview 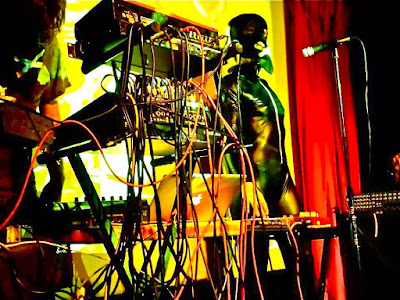 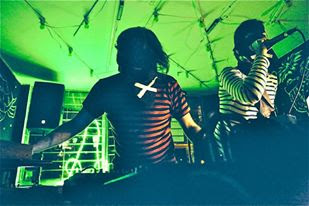 1- When did L.A.Drones! start? Tell us about the history
About a year and a half ago. One night we were invited to play in a show with our post punk band in a friends B-Day party in LA, and as many times it happened to us that we ended up spinning European electronic dance music at the after party, and I think people liked it pretty much! Don't know how! but a kind of inspiration or abduction from something or someone that night happened to us, suddenly we thought that it would be awesome to play our own live music for the dance floor to make punk rockers dance, it was going to be fun! ¨Punk rockers WE also dance¨ we've told ourselves!! so, we already had several machines that we bought years ago, we put all of them together, a synth, mixer, modules effect, many pedals octaving, flanging, distorting, faceering… we've got a new more gorgeous synth and many many wires… and EUREKA, L.A.Drones! came out smoothly and very easily. We wanted to do it so bad, we were so inspired by the idea of mixing our classical souls with electronic music, and doing all this live, like an open set, so we could decide on stage if we did it longer or shorter and improvise as much as we feel like and having close peoples vibes, that was going to be awesome

2- Who are your influences?
For this we need to tell you a story, ha!… ¨there is an old legend which says that, Two eternal L.A.Drones! (thieves) pierced the line delimiting the real and the unreal with the magnificent ability to travel in time and also thanks to the magic hiding in the primes numbers and to the knowledge of the energy that the sound frequencies produce and support the multi-verse…These two could observe and assimilate the most interesting music that humans came along with in decades. So they met near the minimalism of Terry Riley, the proto electronic of Silver Apples, the dronic rock of the Velvet, the Kraut of Cluster, Neu, Can or Kraftwerk, and adore Brian Eno as a living demigod ... and feel close to the rebirth of the Synth, under the tutelage of punk with Suicide, Cabaret Voltaire, Crash Course in Science, through the Industrial apocalypse of Throbbing Gristle… See the birth of the synthesized pop of the Neue Deutsche Welle and DAF, and jumping to the new world to learn about new influxes of acid house, techno and the most primitive electro of the dark Detroit… Never stop breathing the most intoxicated fumes of the Jamaican dub, with people like The Scientist, or king Tubby. They say that no one knows who they are, because they are hidden with thieves (L.A.Drones!) masks!, paths not to be recognized in the akelarres sounds ... They say that Chris & Cosey might be hiding their true identity?¨ eh, eh, but we know for sure they are not Chris&Cosey!!! 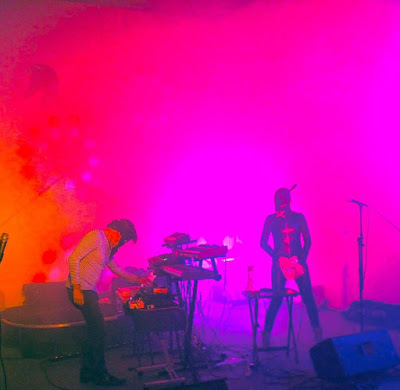 4- How do you describe L.A.Drones Sounds?
We feel that music nowadays tends to the cliche, in electronic music and music in general, both. We understand that in areas such as rock is harder to re invent a sound and get away from the standard, but in the field of electronics, focus of so much innovation in the past, we really cannot stand the cliche sound, as almost everything sounds like today, the same sounds, the same styles ... today innovation is lacking, sounds of the 80's or above with the kraut, when Cabaret Voltaire, Cybotron, Coil, Cluster or Kraftwerk, they sounded different, very personal, even in each album they often changed their color palette, sounding only to themselves. It was very difficult, almost impossible to classify their sound and we think that it is genius, the coolest thing in the whole world. We seek (at least) to create dance music in our own way, as original as possible, with influences of many things. We think and work hard to create our own sounds, avoiding the cliche. Already in the post´punk with Pil, Gang of Four, Talking Heads created wonders, sounding like anything done before with strong influence of black music, but under the punk prism. A music that punk rockers could also dance to, with new sounds... L.A.Drones! It is a little attempt to re-update the dronic concept of the krautrock or the acid, or even the minimal of Terry Riley, La Monte Young, or the sum of sound layers from Experimental Audio Research, or Coil, led to the more Martian dance floor, without losing the sight of the proto electronic of the first industrial people, like The Normal, Crash Course in Science, Trobbing Gristel or Cabaret Voltaire even the first electro and techno from Cabaret Voltaire ... and of the Central European scene, even from Dub experimenting, so influential in the post punk or Kraut.

5 - Tell us about the process of recording the songs
The process is never closed, our only obligation is that the beat always goes on the magic prime number of 127 BPM. Generally, it is basically, a sound experimentation, through synthesizers; or we steal sounds from other bands, samplers that we smashed, trashed or deconstructed with hardware effects, software and guitar pedals ... (Cabaret Voltaire is the favorite by now). We use the same process to create beats, playing the drum machines. In the sequences we seek for a dronic sensation and repetition, it is necessary that all of them can be mixed with each other in harmony and be able to improvise in the studio sessions, even in the live shows. From there, our capsules emerge (or the songs, if you can call them that way) Then structures and melodic ideas come out. Usually from rehearsing new ideas and new songs emerge Everything is very open.

6- How do you feel playing live?
Playing live for us is the fun part, like in the studio... We need it like water, food or any other kind of good stuff…It is a 45-minute straight of sonic experiment. where we have suddenly an objective: steal hearts, ears, souls, feet and genitals and make asses move in every direction!!!… and if this happens… I swear it is just magic, something cosmological, lt is so strong, as the moon dances with waves of the sea. As Schopenhauer would say, we get into real happiness not just for 1 min, but for 45 at least!


7- What is the visual concept of the band?
It is the Orwellian concept of 1984, of uniformity, of militancy, which bands like Devo, Kraftwerk and especially The Residents have applied, with their classic concept of hidden identities… also led to the concept of the anti-hero thieves like Fantomas or Diabolik, who we are big fans of, the atmosphere of the Sci-Fi of JG Ballard, to quote the Normal: Warm Leatherette ... The visuals and pix, shot and edited by us, suggest a journey through the real world dyed with colors emerging under the lysergic effects after ingesting our own sound capsules.  8- Which new bands do you recommend?  We would recommend awesome local bands from LA or Tijuana, Monterey, the ones we love and we´ve played with in the underground scene. You can see most of them in our film ¨Subterranean¨ by Gabriel Velazquez, filmed in LA in December 2014. As we've said before, we believe that the music market and big festivals are full of cliche music, Is the cliche music the hype?. For us, it is so boring to listen to the same music over and over again with the same patrons all the time with nothing new to be added. There is a point where you start to lose interest in listening to new music on the regular channels so we really don't know too much about it. Also if you do music all the time it is hard to be updated on that.

9- Which bands would you love to make a cover version of?
Chrome ¨In a Dream¨ or ¨FireBomb¨ / Cabaret Voltaite ¨Second too late¨/ Suburban Lawns ¨Janitor¨, Bowie, but hard to choose,  I would say… ¨Scary Monsters and Super Creeps¨, ¨Red light¨ from Wall of Voodoo, another angeleno band, that we adore (highly recommend his first album, ¨Dark Continent¨) Wire ¨I am the Fly¨

10- What are your plans for the future?
We are now producing the 1º L.A.Drones! album. Some awesome people in San Francisco want to publish soonish… In september is plan to do a couple of concerts in Barcelona and Madrid and then in in October we go on tour to Seattle, Portland, San Francisco ending in LA… And as we've mentioned before, there is a spanish film maker Gabriel Velazquez, who came last December all the way from Madrid to shoot ¨Subterranean¨ the story of 2 musicians who left Europe in 2010, nomads who go to America, first Mexico and then LA to make their dream come true. It is a fiction film, but It is about L.A.Drones! and the LA local musical scene… and the plan is to have this out by 2016.  11- any partying words Yes, ¨Free your mind and your ass will follow¨ and...¨They shoot Horses, Don´t they?¨ ( in spanish: ¨Danzad Danzad Malditos¨)
*
*
*
Thanks