Climb Aboard with Spiral Arm - An Interview 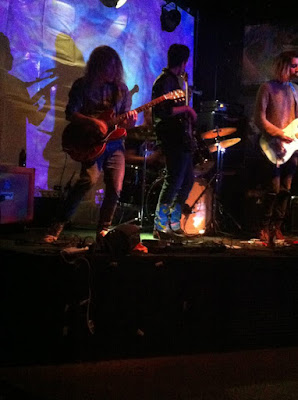 Q. When did Spiral Arm start tell us about the history...
Spiral Arm formed in 2013 in Melbourne Australia with Nick and myself (Phil) - ( Vocals/Guitars ) finding Drummer Nicolo and Bassist Chak . Harry Rae joined soon after on synth completing the line-up. Nicolo and Chak are Italian and Thai respectively. The rest of the band have enviable New Zealand accents. We have been gigging solidly since formation.

Q: Who are your influences?
All members have varied influences, from New wave to Reggae but we all love Black Sabbath and high intensity flangers…

More specifically Nick is a big Strokes fan, Nicolo and I have a love of 80’s metal, which bring a heavier element to the band. Chak loves Reggae and Harry spends his spare time listening to free jazz and Michael Jackson.

Q. Make a list of 5 albums of all time…
Owww… that’s hard…we will all have to choose one each…
Nights out – Metronomy
Core- STP
marquee moon - television
Pink Floyd - The Piper at the Gates of Dawn
Songs for the deaf - QOTSA

When you have a good crowd and can preferably hear yourself onstage nothing beats playing live.

Q. How do you describe Spiral Arm sounds?
We combine heavy and or groovy riffs with spacey sounds…..

Q: Tell us about the process of recording the songs
When we recorded our EP we played everything live in one room then and re recorded some of the guitar and vocals after. We actually recorded to a click track to make going back and redubbing easier.

Q. Which new bands do you recommend?
A band from Melbourne we are playing with next week called Pink Harvest are cool, check them out!

Q: Which bands would you love to make a cover version of?
We have covered a song ‘Tenebre’ by an Italian band called Goblin known for horror movie soundtracks and also songs by Kiss and The Strokes.

We are thinking of covering ‘Dive’ by Nirvana next.

Q: What´s the plan for the future....
We are planning to release an Album next year. We have recorded most of the parts and will start mixing next month. After that, hopefully a tour!

Also we will be making a music video for one of the new songs soon!

Q: Any parting words?
Thanks for interviewing us! Readers can check out our tunes here!
https://spiralarm.bandcamp.com/
*
*
*
Thanks