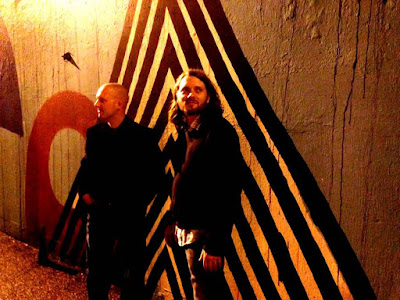 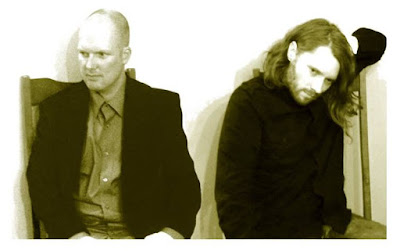 Dan O and Dan R were working on solo projects and wanted to collaborate on an album. After the first few songs the music sort of took on a life of its own and we've been playing for about a year and a half now. We met Paul this Summer around the time of the Baltimore riots.

Q: Who are your influences?
A: We were influenced by wide range of bands and artists. We are big fans of David Bowie, Brian Eno, Spacemen 3, Leonard Cohen, Robert Smith, Johnny Marr, Robin Guthrie, & Simon Raymond.

Q. How do you feel playing live?
A: It's a good feeling. There's not much that can compare.

Q. How do you describe Dark Narrows sounds?
A: We have mixed genres (Newwave, Psychgaze, 80's Goth, and Avant-garde). We like to experiment with dissonance and offset stereo delay effects. It's a real process to nail-down something unique. We are always learning and perfecting our craft. We designed and built some of our analog guitar and vocal effects. We are big fans of Fender and Danelectro guitars and basses.


Q: Tell us about the process of recording the songs?
A: We are entirely self produced. We wrote the framework of the songs first over a period of five months from August to December 2014. Then we recorded everything in about 20 hours in our home studio. We mixed one song at a time. It must have taken us about three months to mix and master the album. We laid down drum tracks first then bass and guitar. Keyboards and other effects were added later during mixing. We write and record vocals after the rest of the song is fully mixed and recorded.

Q. Which new bands do you recommended
A: So many good bands are out right now... Lights That Change, The Morelings, The Sleepover Disaster, We hear that TBTCI knows of a few good bands ;)

Q: Which bands would you love to make a cover version of?
A: The Cars, Psychedelic Furs, Sisters of Mercy, and maybe a song from early period of The Cure.

Q: What´s the plan for the future....
A: We are writing songs for our second album. We plan to record them this summer and release our second album in the fall. Until then we will do a few gigs in Baltimore/Washington area and finish the music video for one of the song off our self-titled debut album.

Q: Any parting words?
A: 1) We heard that Brazil has pink river dolphins. Is this true?
And...
2) Thank you for the support and we appreciate all the listeners in Brazil and the rest of South America, Thank you all!!
*
*
*
Thanks