Someone Else For You with Talkboy - An Interview 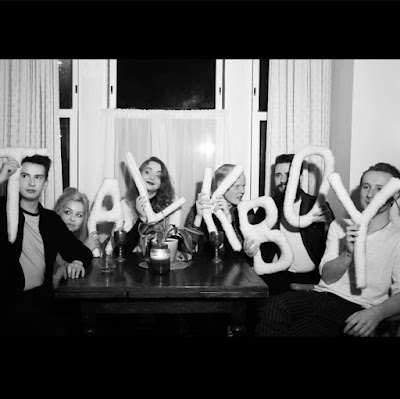 Por enquanto estes singles resumem-se em três pepitas pegajosas, "Mother", Over and Under" e o mais recente "Someone Else For You".

Q. When did Talkboy begin? Tell us about the history...
We all met at university about five or six years ago and became really good friends (we went to a lot of parties and got drunk together a lot). We were all in various bands, but about a year ago, we realised we were all on the same page in terms of what we wanted to do musically so formed Talkboy.

Q: Who are your influences?
There are a fair few of us in the band so our influences vary pretty dramatically. To save time and not make it really boring we say that we all united underneath the general umbrella of people like David Bowie, The Beatles, The Big Moon and Alvvays.

Q. Make a list of your top 5 albums of all time…
That’d be very difficult, so many serve so many different purposes. I’ll do my (Tim) personal top 5 albums from the early 70s, in no particular order;

Q. How do you feel playing live?
Sometimes a bit drunk and always sweaty.

Q. How do you describe Talkboy’s sound?
We try to not get too bogged down in the idea of genre and say that we are more a song based band. One publication did describe us as ‘cry dance’ however - we liked that.

Q: Tell us about the process of recording the songs?
We have a really good relationship with our producer Mickey Dale. He normally feeds us a fair amount of coffee and then we go down into his basement and record the tunes. It kind of is that simple, everything you hear in our songs is us and we hope you guys get that idea as well.

Q. Which new bands do you recommend?
There are loads of really great bands coming out of Leeds at the moment. Team Picture, Far Caspian, Luna Pines, Heir and Glass Mountain are amongst them.

Q: Which band/song would you love to do a cover version of?
Talking Heads - Once in a Lifetime, we would have to do the video as well though as I would love to see our singer Calum doing the fish dance.

Q: What are your plans for the future?
We have a few more singles coming out this year with an EP in the pipeline, we are also playing at a fair few festivals - keep your eyes on our Facebook page more specifics.