Historias para no dormir with Koala Precipicio - An Interview 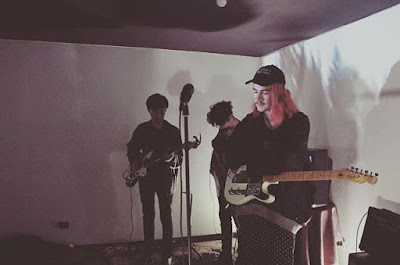 Q. When did Koala Precipicio begin? Tell us about the history...
Koala began in 2016 when i got inside a room of a friend house to start compose my songs. i really wanted a sound that created nostalgic in all the way posible because im really into it. Im very involved whit that kind of sad music that really shows something without say to much. I composed and recorded the songs in the same week only using a behringer amplier and a tape recorder for all instruments. Thats how ¨Todos se Van¨ borned. It worked perfect.

Q: Who are your influences?
I think this is a extend question. I have a lot of influence respect koala and me as a person. But i like a lot the nostalgic sounds that you can create doing simple things and feeling things.

Q. Make a list of 5 albuns of all time…
Really difficult (there are too much) but i can do a list of what im listen right now

Q. How do you feel playing live?
I feel too many feelings. i think that play your music live is really too much impact but beautiful. i always think that when you do music (and more when you present live your music) you expose what you are feeling and living and that´s shoking.

Q. How do you describe Koala Precipicio´s sounds?
I could say that koala is another band that sound kind of nostalgic and lofi noisey but for hopes of shows something more.

Q: Tell us about the process of recording the songs ?
In ¨todos se van¨ i recorded by my own all the songs using one amplifier and one microphone. My producer was with me in the whole process helping me finding the sound that i wanted.
In the second album ¨Ontario¨ i recorded with the band that was with me in the live´s shows that all the members are my closest friends. i compuse everything by my own but in a process of two months. In this album i wanted to sound just as nostalgic but with a band. I wanted to sound like a 90s classic shoegaze band.

By last i maked a last release of ¨Todos se van bsides¨ which are the songs that dont entered in the first album.

Q. Which new bands do you recommend?
There are a lot of cool new bands. i can say listen to echo ladies, drab majesty, ovlov, mini dresses ... there are a lot.

Q: Which band would you love to made a cover version of?
Ohh. I would love to make a cover of les reallizes denudes. Forever.

Q: What are your plans for the future?
I really dont have plans. I only want to do more albums and more and more. i would love to play around the world. it would be amazing.

Q: Any parting words?
Thanks for the interview. i would never imagined being heard in brazil or in any place. its a pleasure to me that you like what ive done.
*
*
*
Thanks