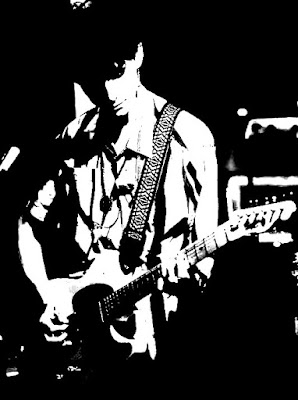 
Q. When did obscenity plugs begin? Tell us about the history...
Obscenity Plugs began about three years ago. Some of my buddies / bandmates and I rented this house in KC called "The Kompound" and practiced and recorded music in the basement. I just recorded a handful of songs and wanted to put them up on bandcamp and my friend, Jack, told me I should use the name "Obscenity Plugs" because he saw it in a Moral Orel episode. The sound of the music is greatly affected by whatever current living situation I find myself in at the time. The recording of "Graveyard Shift" was a nightmare; started off recording on my laptop, which got stolen, then my four track cassette recorder, which broke, and finally a boombox which I recorded "Walk Away" and "Don't Know" on after living in my car / motel for two weeks.

Q: Who are your influences?
Older influences would be Elliott Smith, Neil Young, My Bloody Valentine, Rocketship, and Guided By Voices. Some newer bands that influence me a lot is almost anything that Orchid Tapes puts out. Their roster is always lined up with really cool bands.

Q. Make a list of 5 albuns of all time…
Damn. Hard one. Not in any particular order.
Led Zeppelin IV,
Damaged by Black Flag,
Blood on the Tracks by Bob Dylan,
Loveless by My Bloody Valentine,
and Harvest Moon by Neil Young.

Q. How do you feel playing live?
"I like to lose myself on stage..." - Avril Lavigne

Q. How do you describe obscenity plugs´ sounds?
I think OP is always rooted in "dreamy" or "pop" or "shoegaze" genres but I always want it to sort of evolve and breathe and take it's own shape. I never try to make a song sound like another song I know, even if it's somewhat influenced by it, I always try to nudge it in the weirder direction.

Q: Tell us about the process of recording the songs ?
Long days spent in front of a computer in a dark basement. I usually record after getting a spark for an idea of a song and I don't like stopping after I've started; I really need to get a foundation, at least, for whatever I start recording. I usually drink a six pack and smoke a few joints to keep the momentum going and if I do take breaks it's usually to read comics, watch tv, something creative enough to find inspiration.

Q. Which new bands do you recommend?
If you haven't listened to Hoops yet, you're doing yourself a major disservice. In Kansas City specifically there's a lot of new great punk bands popping up so look for that if you're interested.

Q: Which band would you love to made a cover version of?
Thin motherfuckin' Lizzy.

Q: What are your plans for the future?
Keep writing and recording songs and, hey, who knows? Maybe I'll be on tour someday and you can come spit in my face in person!

Q: Any parting words?
I celebrate the blog that celebrates itself. Thank you so much for letting me talk about myself and then posting it along with my music on your page. Later baby.
*
*
*
Thanks