Receiver with Orations - An Interview 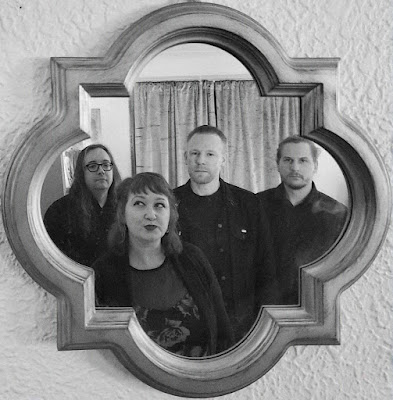 
Q. When did Orations begin? Tell us about the history...
Paul and I started the band in late 2013 with our friend Steve Sojka on drums. We we're at a show one night talking about how our interest in darker music began to wane once the electronic aspect of it started to become more prevalent than guitars. We decided to start a band that was more along the lines of what we missed. Over the next six months we tried to work with a handful of singers until Jess came into our orbit and things finally clicked. Steve played with us for a few years until Matt joined during the writing of our first album, Wych Elm.

Q: Who are your influences?
Musically we draw from pretty much what you would expect from listening to our music; The Chameleons, The Cure, Psychadelic Furs, Throwing Muses and REM to name a couple. The vocals are more influenced by Kristin Hersh and Harriet Wheeler.

Q. Make a list of 5 albums of all time…
This is a list that changes heavily on my mood, but currently I would say:
The Cure - Disintegration
REM - Green
Slowdive - Souvlaki
The Cranberries - Everybody Else is Doing it
Depeche Mode - Violator
Throwing Muses - House Tornado

Q. How do you feel playing live?
Things change depending on the room and the crowd. I strangly think that I play better to a wall of indifference. It makes me feel like I have something to prove. This is also the first band I've ever been in where I really need to hear the guitar live instead of just playing off the drums, so if that is still struggle it makes things a bit harder. When everything clicks into place and you can comfortably get lost in the music it is the absolute best.

Playing live is a cathartic experience for me.

Q. How do you describe Orations´ sounds?
We started off writing post-punk songs, but over time that blended in with a lot of jangle-pop that we love, so what comes out is dark jangly, which sounds like a dream to teenage me from the past.

Q: Tell us about the process of recording the songs ?
The normal is that either Paul or I bring in a basic idea for a song into practice and the other two instrumentalists build off of it until it finally reaches its final form. Then we give it to Jess to add her vocals, at which point the songs tend to take on a different feel that me originally thought it would and we adjust things slightly to that.

Recording was a lot of hard work. During the process, a close relative died. I finished my vocals despite being in a complete state of grief. It was helpful to have something to pour my feelings into.

Q. Which new bands do you recommend?
Lately I have been listening to a lot of Tamaryn, Alvvays and See Through Dresses. All of them have a couple of albums out now, but they are relatively new.

As far as new bands, there is a local group here that I love; Nylon Otters. I’ve also been listening to and really enjoying Phoebe Bridgers.

Q: Which band would you love to made a cover version of?
We have messed around with a lot of covers in the practice space. Very few of them actually end up getting played live, but I would absolutely love if we could work out an arrangement that made sense for us of a Kate Bush song.

Q: What are your plans for the future?
Our new album, Receiver, comes out on Friday (29th). We have a couple of shows lined up and then we will see what happens. We are terrible at planning for the future and just do a lot of things as they come along, so that more than likely will not change.

Q: Any parting words?
Thanks for doing this.
*
*
*
Thanks