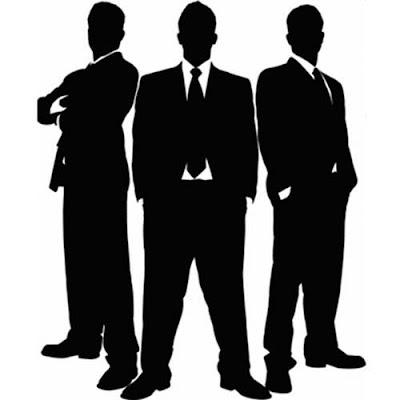 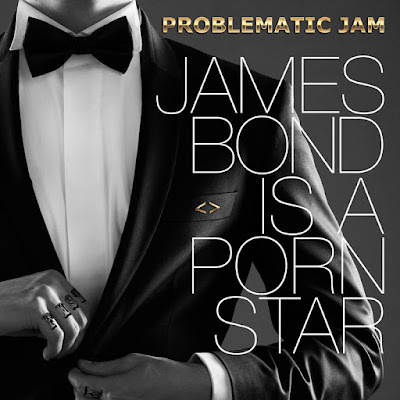 Q. When did Problematic Jam start? Tell us about the history...
David Haircut : It's a long story. Dim Shot C., Fortune Theiler and I met 20 years ago. We formed our first band Problematic Haircuts at that time. At the beginning, we covered songs from the Pixies and then we began to write our own songs. The band broke up in 2007. Three years later, we got together again and we had the idea of a new concept: Problematic Jam. We were tired of all the time rehearsing the same songs to give concerts. So we decided to do more jams and no longer give concerts. This idea was to record everything we play during 4 hours and build songs with what we've recorded. At the beginning, we shared our jams on SoundCloud without producing them (4 albums between 2010 and 2014). From Problematic Cuts, Vol. 1 (2014), we began to rework the jams in post-production and give titles to these sessions: James Bond Is a Porn Star (2014) / Stoned Astronomy (2015) / Problematic Mass-Turbation EP (2015). Before the end of the year, we will release our fourth album Stereonucleose. For the first time, we will work with a label (Grabbing Clouds Records and Tapes) to release it in cassette and digital format.

Q: Who are your influences?
David Haircut : I think all the bands you've listened to in your life end up influencing the music you do. I've been really impressed by Devo, Pixies, Ramones, Blur, The Fall, The Beatles, Oasis, Green Day, Roxette, a-ha, Nirvana, Metallica, Guns N 'Roses, Weezer, The Hives, Sonic Youth, The Strokes, Faith No More, The White Stripes, Pavement, Gang of Four and Joy Division. You can find references to these bands in Problematic Jam.

Q. Make a list of 5 albums of all time…
David Haircut: At the top of the list, I would put Q: Are We Not Men? A: We Are Devo! (Devo) for its mechanical and repetitive side played by outstanding musicians. In second position, I would put Surfer Rosa (Pixies) because without them the indie rock US of the 90's would not have been the same. Black Francis chord chains are atypical and surprising. In third position, I would put Ramones (Ramones) because they play simple and efficient songs and they don't care about production. In fourth position, I would put the Beatles' white album because it sums up all the pop and rock music of our time. And finally, in fifth position, I would put Hunting High and Low (a-ha) for purely personal, nostalgic and sentimental reasons... Damn, I got no place for Nevermind (Nirvana)...

Dim Shot C. : 1. Loveless (MBV) / 2. Stone Roses (Stone Roses) / 3. Heaven or Las Vegas (Cocteau Twins) 4. Relationship of command (At the Drive-in) / 5. Doolittle (Pixies). In my opinion, there is no use in trying to explain why Loveless is the greatest album of all time. Released in 1991, it is the only album that still amazes me today regarding to the production, the songs, the guitars, the hidden-voices while the guitars bleed, the melt between hot and cold, the fire and the water, heaven and hell etc... As far as back as i can remenber, i've never had such a physical and emotional shock since. Soft as snow but warm inside just like they said. A special Big up to my ethereal love story with the Cocteau Twins Heaven Or Las Vegas, the best band ever to me.


Q. How do you feel playing live?
David Haircut: It's funny that you ask us this because the songs of Problematic Jam are not meant to be played live. With Problematic Haircuts, we gave many concerts in bars or small venues. We realized that it ruined our creativity. We spent too much time rehearsing the same songs and finally played them in front of a score of people without being paid for that. Today, with Problematic Jam, we play live in the studio and we invent 15 new songs in 4 hours. It is much more motivating for us. If we wanted to play our songs live, we would have to learn how to play them because it's pure improvisation. It would be too much work. Maybe, one day, we will stream a jam session live on the internet. That could be our first (virtual) gig as Problematic Jam...

Fortune Theiler : when I play live, sometimes, I don't want to stop playing, sometimes, I want to have a beer and forget what happened.

Dim Shot C. : shoegazing because i feel so shy

Q. How do you describe Problematic Jam sounds?
David Haircut: Our style is Post Psych Punk. It means that we mix post-punk and psychedelia. But what we love the most is having tons of reverb, distortion and bizarre arrangements. By the way, all our songs are produced by our drummer Fortune Theiler. He's a master.

Fortune Theiler : Thank you. To me, Problematic Jam sounds like a Mister Freeze (that's a water based popsicle)for a blind man : you never know what you gonna get.

Q: Tell us about the process of recording the songs ?
David Haircut: It's very simple. We go to our studio. Fortune Theiler installs the equipment to record: a computer, microphones, cables and a mixer. Meanwhile, Dim Shot C. and I drink beers, chat about philosophy and politics. Then, we jam for 4 to 5 hours while taking a few breaks to oxygenate our brains. We invent 12 to 15 songs with the rule of making only one take each time.

David Haircut : Everything is improvised: vocals, lyrics, bass, guitar and drums. The entire session is recorded. Then, Fortune Theiler and I cut the songs, mix and add effects. This is what takes the most time. For fun, we write the lyrics trying to understand what I've sung in the studio. What you hear in the end is live improvisations with no overdubs.

Dim Shot C. : I'm not that much in new bands lately but i surely would recommend Temples, fresh 60 revivalist. And more...

Q: Which band would you love to made a cover version of?
Dim Shot C. : More a song than a band but, let's say Metallica for the fun. I am a real amateur of the shoegazing/britpop/grunge sound of the early 90 but to be honest i would have to confess a strange attraction or secret admiration for the metal genre. Not only for the power of the guitars generally speaking, but mainly for the "way of life" of metalheadz, so self assumed about their deviants ways.

David Haircut : Actually none. Because we've already made a lot of covers back in the 90's. This not fun anymore. I prefer to play stuff that have never been played before.


Q: What are your plans for the future?
David Haircut : Before the end of the year, we will release our new album Stereonucleose via Grabbing Clouds Records and Tapes. We will work on new videos and new artworks. We will certainly go to our studio to record a new jam session before the end of the year. We already have the title of our next album, maybe a double album : Azertism / Qwertism...

Fortune Theiler : Yes, but the plan is not to have a plan or play naked on stage in front of an audience totally disguised... or the reverse.

Dim Shot C. : Standing still, which is not so bad after all.

Q: Any parting words?
Dim Shot C. : I've just bought a folk Takamine guitar quite cheap. So happy about it ! A little advice to our gamers fans (there are millions of them), play to the Last Guardian if you didn't already. Cheers and so long.

David Haircut : Our rule is « 1 take = 1 song ». We don't sell music, we PLAY music. You can download almost everything for free on our SoundCloud and our Bandcamp. The art has nothing to do with money. It's like the air that we breathe. But we accept donation, of course. Last parting words : how did you find us ? why did you contact us ? What do you like in our music ? Obrigado por seu apoio :)
*
*
*
Thanks