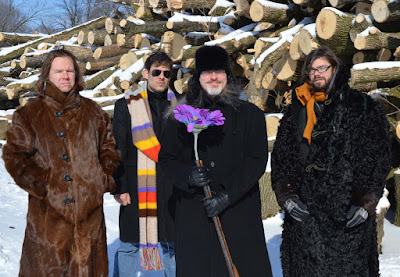 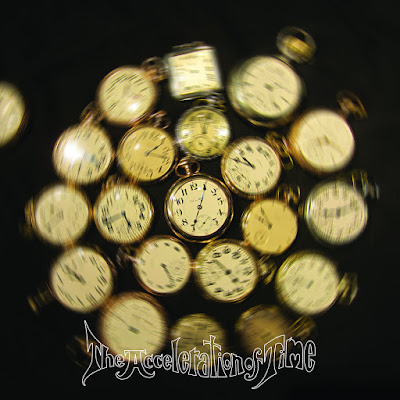 Q: Hello Gregory. First congratulations on the new album, it's really brilliant, what is your analysis after concluding The Acceleration of Time?
Curvey: This has been a couple years in the making. The music for Blown to Kingdom Come and A Man of Conservative Style were written in 2014, right after I finished recording guitar tracks for my friend Tim Ferguson and The Red Plastic Buddha’s album Songs For Mara. Lofgren and I had talked about focusing on a concept for the next album and he suggested a cool idea about time and how it feels like it’s speeding up as you grow older, so we kept that in mind while writing for the album.

Q: Are you happy with the result?
Curvey: Absolutely! A track won’t make it on to one of our albums unless I really love it. If I start skipping over a track when I’m listening to premixes, it usually gets placed in a dark forgotten corner somewhere.

Q: How was the process of creating The Acceleration?
Curvey: Long, that’s for sure. At one point I thought we had all the songs for the record wrapped up, but the whole thing seemed to be lacking angst. I felt it was a bit too laid back. A few unexpected life changes juiced up my emotional batteries, so I decided to put the album to the side and create some music for art’s sake, plus I needed to expel some anger and sadness. What I ended up with was three of the extended tracks on the album, Channel 50 Creature Feature, Another High Speed Blowout, and White Caps in The Wind. When I inserted these new tracks into the album the whole thing seemed complete. These songs weren’t intended to be a part of the project, but when placed between the existing tracks Lofgren and I felt they made the package better, and we both liked the juxtaposition of psych/pop and prog.

Q: What are the main differences between The Acceleration and Victoria Moon?
Curvey: Most of the songs on Victorian Moon were written with my live band in mind. I wanted to be able to play the songs live. I didn’t hold myself to that restriction when recording The Acceleration of Time.


Q: What were the influences for creating the new album?
Curvey: Lyrically the songs are about anything relating to time, for the most part. They don’t tell a story in the rock opera sense, but they are all related. Musically, when I’m composing I try to limit myself to four core instruments; guitar, bass, Mellotron/keyboards, drums. I do this for continuity and because I really like the combination that has become The Luck of Eden Hall, although you may hear a different instrument here and there for embellishment, because I like to use whatever’s around for inspiration. For instance I played my daughter’s clarinet on A Man of Conservative Style and some old iron skillets on White Caps in The Wind.

Q: What are your plans for 2016?
Curvey: This year is shaping up nicely for releases. The Acceleration of Time double album will be released this June by Headspin Records in two choices; 180 gram white or black vinyl, all housed in a gate-fold sleeve. Plus I’m hand making one hundred limited edition pop-up CDs that will only be available on our Bandcamp page. June will also see the release of my song The End of The Lane on Mega Dodo Records as part of their Singles of the Month Club. The song was inspired by Neil Gaiman’s book Ocean at The End of The Lane, and Mr. Gaiman generously made a drawing for the cover art. Later in November Fruits de Mer Records will release our Live At The Cromlech LP (which is still hush hush by the way) and we’re talking about a 3-D or an embossed cover, which will be really cool. We recorded the tracks for the album live in MWNCI Studios, Wales, while on our 2015 UK Tour. Lofgren and I will be preforming acoustically at The 14th Dream of Dr. Sardonicus Festival in Wales on August 7th, and I hope to book a show in London as well. We may have a special guest or two join us for these performances, so stay tuned. Lastly, I’m working on another film soundtrack for Dreaming Tree Films called Traveling Without Moving, starring Steve Guttenberg, which is supposed to premier at the White House Science Fair this April. Lots of work to be done yet. Thank you Renato!
*
*
*
Thanks