Hope with Seaside Caves - An Interview 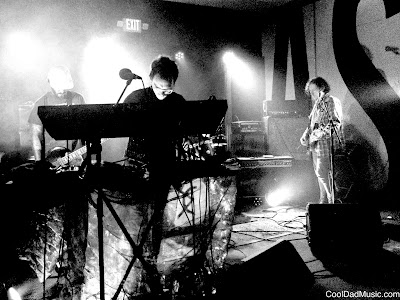 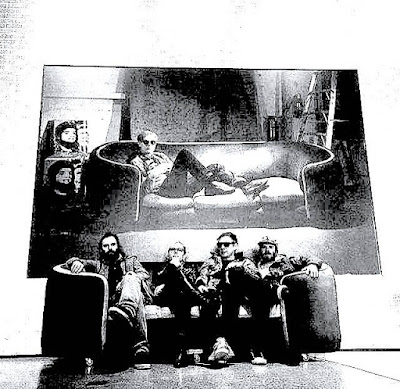 Q. When did Seaside Caves begin? Tell us about the history...
1. Seaside Caves began as an idea around 2010. I was making these 4 track recordings and was basically homeless. I was partying way too much and it got out of control. Half living in a New Jersey party seaside town, where there's a lot of bars, rentals and cheap drug infested motels and also half living in NYC, where I was creeping the streets at night and getting deep into addictions, I decided I had to at least get something out of what I was doing, so I started making these weird 4 track recordings. That led me to forming an actual band to play some shows. I went through several different line-ups before meeting James, who has played drums with me for the past 6 years. Then eventually we got Matt on synths and Kenz on guitar to fill up the sound. The four of us have been together for like 4 years now. And it has turned into something special.

Q: Who are your influences?
2. Our influences are all generally the same. We all like a lot of English bands and shoegazey noise for the most part. Bands like Jesus And Mary Chain, The Cure, Sonic Youth, Echo And The Bunnymen, Slowdive, My Bloody Valentine, Mogwai. Matt and Kenz have been in punk/hardcore bands, so they are into a lot of that stuff as well.

Q. Make a list of 5 albuns of all time…
3. Top 5 albums. That's always been a tough question for me.
The Cure "Disintegration" number 1 for sure.
U2 "The Joshua Tree",
Sonic Youth "EVOL",
Interpol "Turn On The Bright Lights",
Lou Reed "Transformer".

Q. How do you feel playing live?
4. Playing live is always a weird thing for me. But I think that's what I like most about it. You never know what's going to happen. Sort of like life in general. It also depends on what kind of show it is. I like to have fog and cool lighting for sure, to create a mood. We really try to connect with each other when playing live, and share our feelings and emotions with each other and purvey that to the audience. I think the crowd always gets that by the sounds we make. I am always as honest as I can be when playing live. I love loud synths.

Q. How would you describe Seaside Caves´ sounds?
5. Our sounds. It is said that we have a "hopeful sound". And again, it's very honest and is an extension of our emotions.


Q: Tell us about the process of recording the songs ?
6. The recording process usually starts with demos that I do at home. We have tried a few different approaches in the studio. Now we are trying to keep it as fresh and simple as possible. Creating art and not necessarily making a record. When making a record, there's just too much pressure to come out with something really good and it's easy to forget about why you're doing it in the first place. I just love recording sounds and making these weird little songs. So I stick to that and try not to over analyze it anymore. That's what got me here in the first place.

Q. Which new bands do you recommend?
7. New bands. Hmm. There's so much stuff out there these days. I like that band Preoccupations a lot. There's this band from NYC called HEAVEN that I really like too. Other than that, there's so much out there that it's hard for me stay with one thing these days. Bands come and go so quickly now. The older I get, I go back to the stuff I liked when I was younger.

Q: Which band would you love to made a cover version of?
8. Yeah...Ha ha. I want to do an 80's hair metal cover band. Like RATT or something. Those guys were having so much fun back then and everything wasn't so serious.


Q: What are your plans for the future?
9. As far as the future...I don't know. We just put out a single "Rage" that we did in James basement. I've had this band going for 8 years now. The other guys are busy with life....having kids, other bands and stuff. We have a lot of newer stuff, some done and some still not finished. But it's been more difficult getting together lately. I'd like to get this newer stuff recorded and put it out there. We've finally honed in on our sound, so it would be nice to represent that. I've gotten back into bedroom recording a lot more these days. That is what I enjoy the most. So we'll see. There's always someone asking for us to play a show.

Q: Any parting words?
10. My parting words are... I just want people to be more kind to one another and remember where and who we are. Keep life simple and enjoy what is here already.
*
*
*
Thanks