Maruchan with San Coyote - An Interview 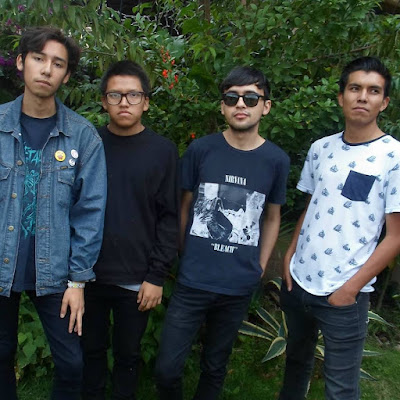 - When did San Coyote start? Tell us about the history...
The band started around 7 months ago, at first it was just me and my desire to make music, I took my guitar and started writing songs and recording them on my pc with an audio interface that I bought at that time, then I started looking for band members on fb groups and got to know my bassist Jhovvan, we were introduced by some kid who was a terrible musician who wanted us to be in his band, it was a very frustrating experience because this kid in particular lied to us about having all the instruments that a band needs, so we didn't have to travel with ours to rehearsals, at the end we told him to get lost and Jhovvan and me decided to make San Coyote, later we met Alfredo and Edgar, who are with us playing guitar and drums respectively.

- Who are your influences?
Well our influences vary between menbers as well as many bands, but we all agree that we have a very strong Wavves and Los Blenders(Mexican band) influence, I personally like 90's alt rock acts such as Nirvana, Sonic Youth, Dinosaur Jr and Weezer, but I also love a lot of shoegaze bands like My Bloody Valentine, Slowdive and some less popular ones like Whirr and Swirlies, Jhovvan is the more inclined to Noise Pop and Surf Punk bands like the already mentioned Wavves, Fidlar, Los Blenders, etc, Alfredo likes Radiohead, St Vincent, The White Stripes, and I don't know much about Edgar's influences because he doesn't have much time playing with us but from what he's told us he has been moved by Editors and some mexican acts like Enjambre as well.

- Make a list of 5 albums of all time…
In no particular order:

Loveless, by My Bloody Valentine
Sgt Pepper's Lonely Hearts Club, by The Beatles
V, by Wavves
Alba, by José Madero
In Rainbows, by Radiohead

- How do you feel playing live?
Well we haven't played that much since we're just starting to get our shit together but the times we've played have been a mix between cringe and good experiences, I remember the first time me and Jhovvan did a concert, at that time we didn't have anyone else playing with us so I had the great idea of playing Roland TR 707 samples on my pc live as a backing track for guitar playing... holy crap, then when we had an actual drummer things went ok and people started to take us more seriously and enjoy some of our stuff, when we started recording we stopped gigging for a while until we had the EP prepared.

- How do you describe San Coyote´s sounds?
Well we play punk with a lot of emphasis on noisy lo-fi shrill sounds and lots of reverb, and like a lot of bedroom dream pop bands nowadays we display some beginner-musician tendencies such as awful singing and cheap recording technics.

- Tell us about the process of recording the songs?
Recording process was very cheap, I literally plugged my MIM Fender Blacktop Strat into a Way Huge Havaline and from there into an M-Audio M-Track Plus, I didn't use amp simulation because I couldn't afford one so the sound I got was very lo-fi and shrill, you could say it was terrible but when I started doing the actual recording I actually liked it very much, it reminded me of the guitar sound in albums like Psychocandy by The Jesus and Mary Chain or the Wavves debut LP, when I had the guitar tracks recorded I just added the Roland TR 707 samples that I mentioned earlier as the drum parts and then I recorded the bass tracks with my Kingston Hound Dog bass, and then I just sang over that with the help of the classic Shure SM57, the result was much better than I expected I didn't even need to add lots of VST's to make it sound ok.

- Which new bands do you recommend? ich new bands do you recommend?
We really don't know much about fresh-from-garage bands because a lot of them do kinda suck... but we've liked a lot the music from bands like Palm and Melrose, Melrose has a special place in my heart because they're dudes that I actually heard since they started out from scratch doing posts on 4chan's /mu/ forum which I go to a lot because of the community interaction.

- Which band would you love to made a cover version of?
Well we haven't decided to do a cover we all die to make, it happens that sometimes a specific member of the band wants to cover a band only he likes and then we follow along, but I think all members would be more than pleased to cover Remo Drive, since they're just an amazingly fun band.

- What are your plans for the future?
We are currently saving money to buy equipment for the recording on our first proper LP, I already have some song ideas but I need to drop some of the beginner tendencies that I talked about earlier like the use of drum samples, the awful singing and some good tube guitar amps for guitars and bass to really make something that sounds amazing.

- Any parting words?
Thanks to Renato for liking our tunes and interviewing us, we're very proud of the job you're doing in this blog.
*
*
*
Thanks