The World Is Your Oyster with Kill The Moose - An Interview 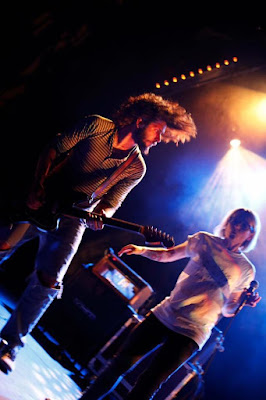 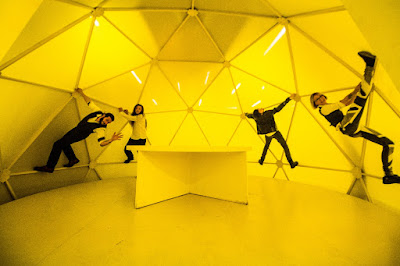 Q. When did Kill The Moose begin? Tell us about the history...
Kill The Moose began during the summer of 2015, Elisabeth sang in a pop rock band and they were looking for a new guitar player. I played in this band for a while but Elisabeth and I were interested in playing louder full of reverb songs. We created our band when we played for the first time with Pierre, the drummer who was a university mate. After a couple of tests with different bass players, we hit it off with Chris our bass player! Then, we have released two EPs and made a lot of gigs.

Q: Who are your influences?
Shoegazing of course! I am definitely smitten with My Bloody Valentine, Sonic Youth and Slowdive but I am fan of Ringo Deathstarr, Tokyo Shoegazer and A Place To Bury Strangers. As for Elisabeth influences are Pj Harvey, Lush, Belly, Salad or Curve and all the British scene of the nineties. The second aspect of our influences in our music (bass and drums) is old hard rock of the seventies like the first albums of Black Sabbath or Deep Purple.

Q. Make a list of 5 albums of all time…
Very tough question! The main album that I would take on my desert island is Loveless, I have listened to this album twice a week for years and each time I do I discover a new subtlety. The second one is Sister by Sonic Youth for their masterpiece Schizophrenia! I cannot make a choice for the third album because it’s too tricky to choose between the last Slowdive and Souvlaki… The fourth one is Push the Sky Away by Nick Cave and the Bad Seeds which is the album that made me dive into his universe. Finally, the last album of this selection is Sunn O))’s ØØ Void for the massive wall of distortion and noise as well as its cavernous ambience!

Q. How do you feel playing live?
There are two kinds of feelings, depending on the gig. When we play in a small-sized place, it’s always a pleasure, it’s electrifying, punchy, we are close to the public, friends... Feeling the amp vibrations in your back because you are stuck to it ! We love playing on this kind of stage, it’s usually where we introduce our new songs. We also like to perform on medium and large stages but it’s another feeling, with all the strong lights, strobe, monitors. In any case, we just love being on stage to communicate our energy.

Q. How do you describe Kill The Moose´s sounds?
I can describe it as a pure and melodic voice contrasting with a huge wall of noisy guitars backed by a strong bass / drums like God is a Messed up Guy or The World Is Your Oyster. Sound is the primal essence of our music, we spend hours at the beginning of every rehearsal trying to get it right !


Q: Tell us about the process of recording the songs ?
It takes a long time to finalise a song. We like to improve it during gigs. It is our way of taking a step back with our music, we record it live to listen to it later. We like the EP format, it allows us to produce releases regularly. We record the songs in a studio on the French Riviera, close to Cannes and Saint Tropez, near the sea front with a great Sound Ingineer, Bill, who has strong skills in recording indie bands. We really love testing during the recording, we experiment some weird stuff with microphones or playing with layers of reverb.

Q. Which new bands do you recommend?
I would like to recommend My Diet Pill, a local band, even if it’s not a recent one ! I also recommend listening to the japanese band Oeil, it’s a massive wall of reverb full of etherate melodies! I am also very fond of Your Friends Polymers, featured in the Mars compilation.

Q: Which band would you love to make a cover version of?
I would really love to make a cover version of Nick Cave and the Bad Seeds like From Her To Eternity or The Mercy Seat or even more recent songs like Mermaids. The second option, is to cover one song written by Mc Cartney during the Beatles. I grew up with his voice and I have always loved songs like Eleanor Rigby and Penny Lane. The last one has a special meaning for me, Liverpool is where Elisabeth’s family are from.

Q: What are your plans for the future?
We are recording a new EP. For this one, there will be my currently favourite song, with loud guitars.Another song which is a tribute to Warren Ellis’ tricks. We are also looking for a label which can help us play in the UK ! We plan for the future to produce a compilation of tracks made by indie and alternative rock bands from our region. Finally we really wish to be on one of your tribute compilations !

Q: Any parting words?
A Møøse once bit my sister... No realli! She was Karving her initials on the møøse with the sharpened end of an interspace tøøthbrush given her by Svenge - her brother-in-law - an Oslo dentist and star of many Norwegian møvies: "The Høt Hands of an Oslo Dentist", "Fillings of Passion", "The Huge Mølars of Horst Nordfink".
*
*
*
Thanks