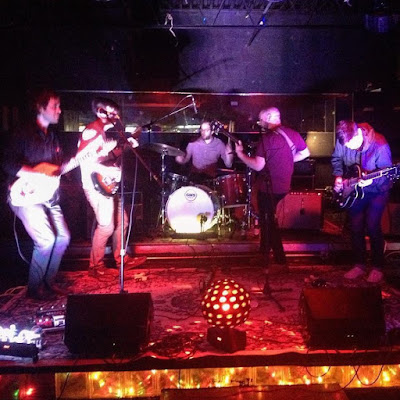 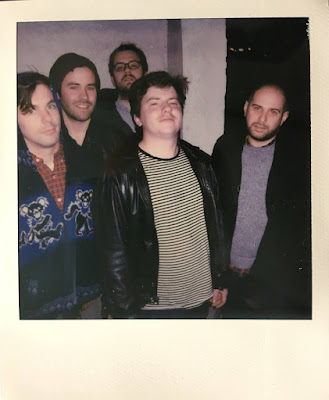 Q. When did New Aura begin? Tell us about the history...
Tayler: We are based out of Boston, Massachusetts. I started working on some material around this time last year. Tim and Dan have a studio in their attic where some more ideas got started. Tim and I go back, and we both recently played in Magic Shoppe for a few years. I reached out to Matt from Drug Dogs who had recently linked up with Malatese drummer, Jon Reed. After a couple of months of playing and writing more music together, we released our self-titled EP on vinyl and cassette. In support of our new release, we recently wrapped up a tour of New England with our long-time pals Your 33 Black Angels.

Q: Who are your influences?
Matt: Spiritualized, Brian Jonestown Massacre, Spacemen 3 for sure. My more modern favorites of that ‘60s revival genre are the Asteroid #4, Les Big Byrd, Black Market Karma, the Black Heart Death Cult...but I also listen to alot of punk music I also find that "sound" in - like Black Easter or the Marked Men.

Tim: Same as Matt, but also lots of Kraut rock like Neu and Can, as well as more modern krauty-garagey stuff like Thee Oh Sees and King Gizzard. Also been loving Amen Dunes and Unknown Mortal Orchestra lately. And the Childish Gambino album is fantastic.

Dan: Same as the other dudes plus The Rolling Stones, The Kinks, Radiohead, Gorillaz, Fleet Foxes, Gucci Mane. As far as guitarists, Bob Weir has definitely shaped my approach for how I want to play rhythm parts.

Q. How do you feel playing live?
Jon: Playing live is one of the best feelings so I feel pretty damn good playing live. Our songs are short and full of energy.

Q. How do you describe New Aura´s sounds?
Jon: Our sound is a bit of psych, shoegaze, and for a lack of a better term the music in the 60s-70s that was categorized as "Krautrock." We realize everyone's attention spans are shot in the modern age so we keep the songs short and sweet. I've heard folks say we sound like the Detroit garage band The Index or "The Velvet Underground, but heavier" - an anonymous bartender from Western Mass.

Tim: Yep all of the above. I play a big fully hollow Gretsch electromatic or a Vox Cheetah, both of which I drench in reverb and delay, so I kind of provide the sonic glue between our other two guitarists tones. Jon and Matt are a sick rhythm section they keep it moving forward.

Dan: I think having 3 guitars and one of them being a 12 string really allows us to layer the guitar sounds/tones. Sometimes me Tim and Tay will each be playing different things which I think is a big part of our sound.


Q: Tell us about the process of recording the songs?
Tayler: Me, Tim, or Dan will usually start with a demo at home then show them to the band where it will take on a new life. Tim and Dan’s home attic has been a great space for us to work on ideas. After playing them for a bit, we will try to record as a full live band, then overdub anything we see fit. We are all very interested in production, and all bring something unique to the table. Some songs come together right away while other songs have taken a couple months to write/complete. We had a lot of fun with our debut record, and are looking forward to the next one.

Tim: We went into an awesome studio in Boston operated by our friend Spenser Gralla and did most of the tracking for our first EP in live-takes. We did one song like 10 times but ended up not even using it. Just trying to find a certain vibe. Sometimes you ruin it the more you try. Other times you need to do a few takes to get what you want. After tracking we did some overdubs and mixing and stuff on our own. I make demos in my home studio using a pretty minimal setup and some random outboard gear I like to use.

Q. Which new bands do you recommend?
Matt: There's this group called Phenomena 256 out of Northampton, MA that I think is awesome. Also, Boston locals in Banshee can't get enough credit for how unique their sound is.

Jon: They're a bit different sounding then New Aura, but some of my former bandmates are doing some great things in the bands Buck Gooter, Flyying Colors, and Gumming

Tim: Heavy Birds from NYC are incredible. Sun Voyager from NYC is also so damn good.

Dan: We played a show a couple weeks ago in Troy NY with The Abyssmals and they were fucking rockin'

Tayler: Your 33 Black Angels were great tour mates – can’t wait for their next record. Jim Leonard is working on a cool new record now- keep an eye peeled for that. The artist who made the artwork for our EP, Al Marantz, just released another great record.

Q: Which band would you love to make a cover version of?
Tayler: We’ve been having fun playing some Warlocks songs at practice. I’ve always wanted to cover Exile on Main Street.

Q: What are your plans for the future?
Jon: Now that our first EP is pressed and out to the public, we're hoping to write a full length in the next few months and hopefully do a bit more touring. We want to explore expanding our live sound and play some more exciting places.

Q: Any parting words?
1. Big Thanks to TBTCI and to all the artists out there making the world more interesting.

2. Check out our new record (free download):
https://newaura.bandcamp.com/releases
*
*
*
Thanks