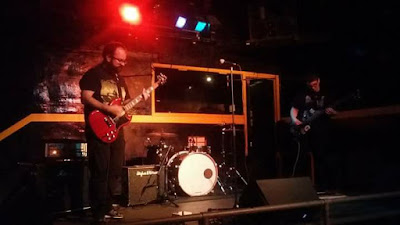 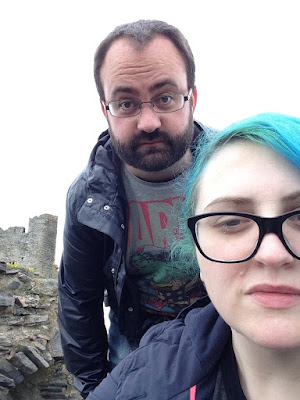 Q. When did Cody Noon begin? Tell us about the history...
S: To answer this properly is quite long. Charlie has been writing and playing music for his entire adult life. We met at a music festival, Charlie spent a long time trying to put moves on me that I was just emotionally incapable of registering, then he asked me out, and that worked out really well. A few years later I got a bass and very soon after that we played our first gig, during which I slipped a disk in my lower back. For years we struggled, either to hold an instrument or to find rehearsal space. But two years ago we moved out of London to Reading and finally go it together enough to release our first album this year. Now we can’t imagine stopping — its just part of who we are as a family - ugh that sounds so corny.

Q: Who are your influences?
CN: We like a lot of music and we’ve been inspired to write big emotional songs by many great instrumental and stirringly emotional bands: post rock (Mogwai, Slint), slowcore (Codeine, Low), US Indie rock & emo (Yo La Tengo, Appleseed Cast), shoegaze (My Bloody Valentine) and sparse doom (Earth, Boris). More often than not we get compared to completely different bands - its one of the great things about putting music out there - it’s different for everyone.

Q. Make a list of 5 albums of all time…
CN: Vee Vee, Archers of Loaf
Spiderland, Slint
Young Team, Mogwai
Frigid Stars, Codeine
I Can Hear the Heart Beating as One, Yo La Tengo

Q. How do you feel playing live?
S: Nauseated. I am hypercritical of my playing live and worry about every mistake but afterwards it always feels worth it.

C: It can be nerve-wracking as our music is sparse and slow. However, once we have started and eased into a song it feels hypnotic. It feels great when you know you’ve made a connection with the audience.

Q. How do you describe Cody Noon's sounds?
CN: We’re definitely minimal and emotional. Since we developed our sound very organically and unintentionally, we never put much thought into what we should sound like. So now every time someone else describes us it makes us realise a new aspect of our sound. One favourite is that we sound like a slower, heavier Yo La Tengo, another is that we sound like a Cat - maximum effect, minimum effort.


Q: Tell us about the process of recording the songs ?
CN: For “Double Dark” we recorded the songs almost entirely live in an awesome studio/converted barn in Oxfordshire. This made the recording process more ‘high stakes’ than all our previous releases (where we recorded things separately and did more overdubs) but the extra tension resulted in a more intimate, atmospheric and raw sound.

Q: Which band would you love to make a cover version of?
CN: We recently recorded a cover of Bruce Springsteen’s Dancing in the Dark (we’re still looking for a way to release it). It’s fun to play with artists we love that don’t have that much in common with our sound. Sometimes it leads to surprising new directions, like when we covered the Lavender Town theme (on the Bobowler EP) from Pokemon Red and Green. We found an emo riff hiding between the notes like a ghost.

Q: What are your plans for the future?
CN: We plan to play some gigs this Summer - in the longer term we would love to tour further afield. And we are about four songs into writing our next release - so far its about wrestlers, motorways and having sex with ghosts.

Q: Any parting words?
CN: Thanks for taking an interest in our music and asking us to do this :.) Feel free to check out our music here: https://codynoon.bandcamp.com
*
*
*
Thanks