This Is Not The End with Spielbergs - An Interview 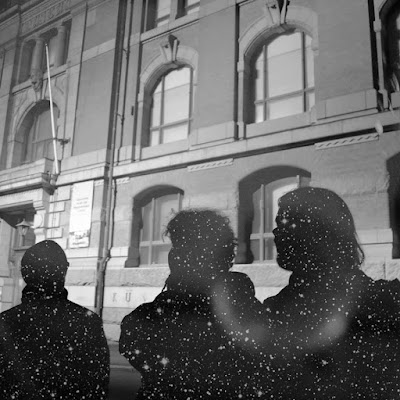 O trio norueguês, Spielbergs debutou no primeiro dia deste Fevereiro com "This Is Not The End".

Q. When did Spielbergs begin? Tell us about the history...
Me and Mads have both played in several different Oslo bands for a number a years. Playing gigs and making music was life. We did this for a long time without really getting to the level you could make much money, so we both ended up wanting to do something else. We tried very hard not to be in a band(read: Taking a uni degree, getting kids and a normal life) for 3 years. Suddenly we found ourselfs missing making music, and got ourself a rehersal room and started to jam.

There were two clear rules 1: To Enjoy and have fun making music 2: As long as it is a good song It does not matter if its a punk song or an acustic song.

after Jaming on fridays for a while. I met Stian at a farvel show for another Oslo Indie band. In the mensrom shitfaced drunk I asked Stian if he wanted to join in on the jaming. He said yes!

Q: Who are your influences?
A lot of different stuff actually. And not only guitar music. Everything from electronic stuff to hip hop.

But all three of us have been a part of several indie,HC, punk Rock bands so we do have a lot of guitar based bands that probably influence us in one way or another that we all like.

One of our favourite bands are And You Will Know Us By The Trail of Dead. Their catalougue of albums are one to envy and they look like having a freedom when making music that is very appealing.

The same goes for Norwegian Band Motorpsycho. A band very important in our younger years and still is. We love to Jam and they are the masters of long and brilliant jams.

Q. How do you feel playing live?
The most fun thing is that you get to remake your own songs. At the moment we are prepearing for the album tour so we are rehearsing and re learning some of the songs we have not played since we were in the studio. It is great fun and some of the more jam based songs are developing even further, and almost feel like new ones.

Q. How do you describe Spielbergs´ sounds?
A blend of alot of generes really. Our thing is just to write songs we like ourselfs so if its a concrete short pop song , a punk song or a longer jam based song it really does not matter. Our debut album has turned out as diversed we hoped it would be. But normally there is a wall og guitar, bass and drums

Q: Tell us about the process of recording the songs ?
We worked on demoes/Pre productions for some time and sent it over to Tord. Ø Knudsen (the Wombats) and Marius D Hagen(Team Me). Then we recorded the album over 4-5 long weekends putting down the bass and drums first before the guitar and vocals. Good fun to work with both Tord and Marius as they are good friends and brilliant musicians themselfs having loads of good ideas. It is also alot easier to relax when you work with close friends so the entire recording session was really laid back and comfortable.

Q. Which new bands do you recommend?
In Norway? or all over?
JOHN from London is a brilliant twopiece and a very good pair of guys named John. Saw them live supporting IDLES in Barcelona. Epic!

Some really good kids coming through in Norway these days. Rock is back they tell us. Girl In red , BRENN are both young and talented.

Q: Which band would you love to made a cover version of?
We tried to cover Iron Maiden the other day. It sucked ha ha ha.

Q: What are your plans for the future?
Our first album "This Is Not The End" is out on By The Time It Gets Dark Feb 1st.

We will be touring Norway, Uk And Europe this winter and spring then festivals during the summer

Q: Any parting words?
Thanks for checking out Spielbergs. And it truly is an honour to do an interview to someone in Brazil on the other side of the world.

BTW I think that there actually is a band called Spielbergs in Brazil as well? That is strange.

Yes and hopefully someday we will play a show or two in Brazil. That would be a dream come true!
*
*
*
Thanks