This is Kenna's Song with Cupidcome - An Interview 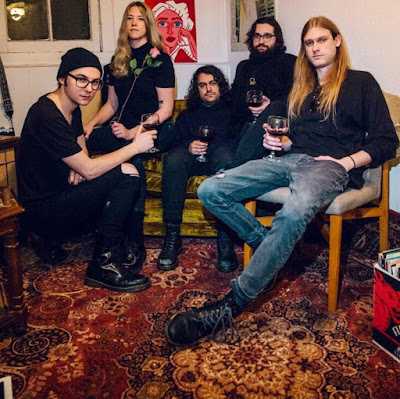 
Q. When did Cupidcome begin? Tell us about the history...
- We’ve all been friends for over 10 years, so it was very easy for us to come together and form the band once we decided that music was what we wanted to do. Us already having that chemistry as friends really helped form the band dynamic. Cupidcome originally started in 2014 as an electronic Suicide-esque band with Mario and 2 other former members, but that version of the band didn’t last long and we only played a couple of shows. In March 2015 we formed the current lineup with Mario on guitar/vocals, Bailey on guitar, and Micah on bass. We originally did not have a drummer and instead used a drum machine that Mario operated with a foot pedal. Our drummer Spencer joined later playing keyboards originally, but moved to drums since that's what he's good at. Playing with live drums after using electronic drums for almost 3 years was a welcome change. We had a girl named Malory playing keyboards and doing backup vocals for a couple of years, but she moved away and isn’t currently with us. She’s pictured on the cover of our first EP and helped write a lot of our early songs, she brought a lot to the band that we miss. Our most recent member Sam started playing keyboard with us about a month ago and he’s already added so much depth to our sound, we’re really happy about it.

Q: Who are your influences?
- It sounds cliché but there’s almost too many to name, we listen to a wide variety of stuff from many different eras. We’re big fans of everything from 50s and 60s rock n roll, to the psychedelia and avante garde of the 60s and 70s, to early electronic music like Kraftwerk and Neu!, to glam rock, to new wave and 90s alternative. The biggest influence for the band’s sound is definitely the British indie and shoegaze movement of the 80s and early 90s. Bands like The Field Mice, The Chameleons, The Stone Roses, The Jesus and Mary Chain, Happy Mondays, early acid house, The Cure, and My Bloody Valentine of course.

Q. Make a list of your top 5 albums of all time…
- Script of the Bridge – The Chameleons (Mario)
- White Light White Heat – The Velvet Underground (Bailey)
- Duty Now For the Future – Devo (Sam)
- Self Titled – The Pains of Being Pure At Heart (Micah)
- California – Mr. Bungle (Spencer)

Q. How do you feel playing live?
- There’s usually some element of humor in our live shows, we like to laugh on stage. We’ll play less than serious songs in our sound checks and as closers. We’ll play funny sound clips that we find on the internet by putting our phone speakers up to our guitar pickups in between songs. We like to play as loud as we can get away with, it adds a lot of energy and texture to our sound that you don’t really get in our recordings. Live shows in general should be loud, otherwise you might as well listen to music at home or in your car. When you see your first few shows as a kid the most memorable thing is how loud and wild everything is, it’s a staple of rock n roll and it’s essential to the live experience as far as we’re concerned.

Q. How do you describe Cupidcome’s sound?
- Although we borrow our name from My Bloody Valentine, we've make it a point not to sound like them very much in our music and we think we’ve done a good job of that. The best way to describe our sound is somewhere in between shoegaze, dream pop, post punk and twee. We like our music to have a sort of edge to it so that it doesn’t sound too boring or quaint. If there’s anything that we do want to borrow from My Bloody Valentine in our sound it’s the trippy, upbeat and heavy pop that characterized their early EPs, as opposed to the lusher soundscapes from “Loveless” that they’re most known for. We try to put as much emotion into our songs as we can, we feel that emotional content is the most important element that any band can have no matter how technical the music is, otherwise it’s just empty and uninteresting. Usually this translates into sadder and more melancholy songs, but we’re fine with that. Most of our favorite songs are sad songs, that’s just what we connect with.


Q: Tell us about the process of recording the songs?
- We try to keep it as simple as possible. We record digitally in our own studio for now because it’s cheaper and easier to work with, we bought all of our own gear and we do it all ourselves. We try and stay away from getting too crazy on the software end of things, we don’t really use plugins and our post-production is very minimal. Instead we try to make our instruments sound the way we want straight from the amp. We record vocals using a tube pre-amp plus a few pedals instead of touching it up on the computer.

Q. Which new bands do you recommend?
- Most of the bands we like are older bands to be honest, but there are still quite a few newer acts that we enjoy. We love newer 60s revival bands like The Allah-Las, Thee Oh Sees and White Fence. We love Part Time, Chastity Belt, and The Pains of Being Pure at Heart. There are a couple of newer singer songwriters we like named Doug Tuttle and Kevin Morby that are excellent, they’re like if Mac Demarco actually took himself seriously. Fat White Family is gnarly and amazing. Some of our local contemporaries are fantastic as well, bands like Lord Vox, Choir Boy, Super 78, The Nods, and The Eleventh Door.

Q: Which band would you love to make a cover version of?
- It’s hard to settle on a single band. We’d really enjoy doing an Al Stewart cover band, playing “Year of the Cat” with a full ensemble would be quite an experience. We also think it would be interesting to make a Charles Manson cover band, he wrote a lot of good songs and it would help to keep those alive.

Q: What are your plans for the future?
- We’re trying above all else to stay busy and put out as many songs as possible right now while maintaining our live chops and playing shows consistently. We have a lot of new material floating around, but working around everyone’s schedules and personal lives is difficult sometimes. We have plans to move to a bigger city eventually when we have the resources for it, in the meantime we’re trying to put out as much material online as possible. We have a lot of faith in ourselves as a band and we want to see how far it can take us.

Q: Any parting words?
- We’d love to play in Brazil when it’s possible for us, it’s the fastest growing culture in the world right now and we think it would be exciting to experience a bit of that through our music (not to mention the beautiful scenery). We’re trying to build a fan base online and we love that people are listening to us all around the world. You can find us on most major streaming services like Spotify, Apple Music, Google Play, Youtube, etc… we’re on BandCamp and Soundcloud as well. We plan on releasing a lot of new material in the future so keep an eye out for that.
*
*
*
Thanks