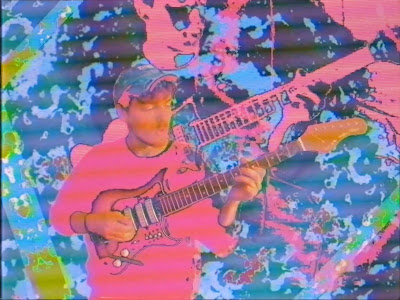 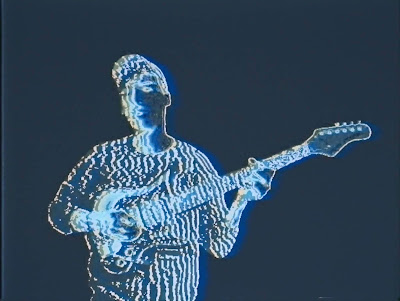 Q. When did Scar Polish begin? Tell us about the history...
My name is Robin Fisher and Scar Polish was never meant to exist. Let me explain.

I just escaped Brexit and moved from UK to Berlin with the idea of being an acoustic songwriter. The Berlin housing situation is very difficult and I lived in some strange places for while. This one time I was living in the student halls of a Turkish speaking university, where some guys broke into my flat and stole my music gear/instruments. I was broke and basically they left only this little sampler (Korg Volca Sample), but because it was all I had I hyper-focused into it. It was the first time I really started making electronic music. At one point it occurred to me that I could sing over the beats and then everything just started evolving and I knew something interesting was happening but I didn't know exactly where it would go. Added some delay pedals, drone synth and a pawn shop guitar and it was Scar Polish and suddenly people were at my shows. It was pretty fast and unexpected.

Q: Who are your influences?
I really like Sun Araw. I think the song 'Horse Steppin' went deep into my head at some point and stayed there. There's strong surrealism there. Certain tracks I get very obsessive with. Another is Implog's 'Holland Tunnel Dive'. Spun that a lot. Generally I like mood more than hooks. John Bender is also good, like that kind of weirdo lo-fi outsider art thing. Then there's Panda Bear, Beach Fossils, also No Age I really love. The album 'Pleasure' by Pure X I played on repeat for months.

Q. Make a list of 5 albums of all time…
My Bloody Valentine - Isn't Anything
Modest Mouse - Building Nothing Out of Something
The Microphones - It Was Hot, We Stayed In Water
Adam Gnade - Run Hide Retreat Surrender
Trouble Books - Gathered Tones


Q. How do you feel playing live?
Like I'm on the edge of losing control of all my machines but on purpose at the same time. I get completely lost in them, in a good way. It's quite a visceral feeling. The live rig consists of a bunch of samplers, noise boxes, synths, effects, guitar, mic and I'm operating everything at the same time so there is a lot of very fast knob twisting, button pressing and guitar playing. Sometimes I spin the gear into crazy settings and then have to reset everything really fast before the next section. It's a feeling I like, that everything might fall apart at any moment but I can keep it on that edge, like it's not quite safe.

Q. How do you describe Scar Polish´s sounds?
Somewhere between lo-fi psych rock and glitchy live electronica, with a kind of dreamy dizzy surrealist edge. I'm trying not to belong totally to rock music or electronic music, I want to keep a foot in both sides. It's more interesting.

Q: Tell us about the process of recording the songs ?
I never write while doing proper recording. It's generally the very last thing I do. I always write while jamming with my gear first. Often I will record hours of jam, splice together the good pieces and generally that's how I'm writing the songs. Then I'll play the song live a bunch of times until it fully evolves. Then I'm going to record it at the last possible moment. Also, all my gear is carefully chosen so the sound on stage is exactly as I want it. Special microphone, special pedals, special effects etc. The studio recording sounds just like the live version because of this. We don't do anything special in the studio apart from level and EQ balancing. There's no studio trickery, its all my gear.

Q. Which new bands do you recommend?
I really like Blithe Field's lo-fi ambient noodles and electronica. I could listen to it for days. And American Wrestlers self titled record, that record is magic.

Q: Which band would you love to made a cover version of?
Always wanted to cover Born Slippy by Underworld.

Q: What are your plans for the future?
The debut EP just came out. I'm booking a European tour. And then I'd like to go to the USA. Also, working on my visuals more because the visuals are important to me.

Q: Any parting words?
My debut EP 'Science Friction' is out now. It put the full release on YouTube for everyone to enjoy, I found a lot of great music like that: https://www.youtube.com/watch?v=D7ntnB4cxaA. You can also buy the tape from http://www.octubre.tv. You can follow Scar Polish in the usual places. Thanks for the interview Renato! Appreciate you reaching out :)
*
*
*
Thanks