Stay with It´s For Us - An Interview 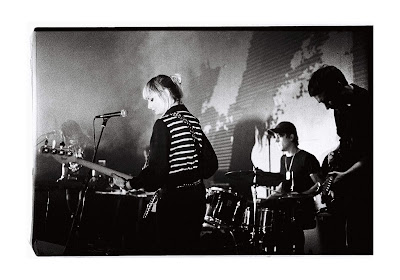 
Q. When did It´s For Us begin? Tell us about the history...
Alex- It’s for us was actually Jon and Milla’s supercute indiepop duo-project at first. I think it might even be some tracks from this time hidden away on the deeper parts of the internet. Anyway, the project was going fine but eventually, in a drunken moment of clarity, they realised that it was alot more fun to make noise and play fast. So they invited a couple of friends to play noisy and fast with them, and the rest is history as the saying goes.

Q: Who are your influences?
Jon- We are influenced by everything that goes on in and around our lifes. Im actually more influenced by art then anything else. Specially graffiti, flow, dynamics, movement, repetition and stuff like that.. There is so many great musicians around that the list would be to long but i think they know who they are

Q. How do you feel playing live?
Alex- Self-conscious, happy and just the right amount of drunk.

Q. How do you describe It´s For Us´ sounds?
Alex- I really suck at describing our music to be honest. When people ask me about it I usually get all weird and rambly. But if I would try to explain why I think it’s good, I would say it’s because it’s really energetic and our songs usually have pretty cool atmospheric feels to them. But it’s better if you listen to it.

Q: Tell us about the process of recording the songs ?
Alex- On this album we’ve recorded every instrument separatly wich, in my opion, isnt as fun as recording everything live. But it’s way faster, and since we were on a tight schedule and an even tighter budget we decided to do it like that. The sound is mega-fantastic though, thanks to our lovely sound-genius Jon Bordon. I just like recording together because it’s alot more fun to play together, rather than alone to a click-track.

Q. Which new bands do you recommend?
Jon- There are so many..

Q: Which band would you love to made a cover version of?
Jon- Johnny Cash!

Q: What are your plans for the future?
Jon- Release our new album and tour as much as possible and i also have sketches for over one hundred new songs so we will have things to do