For The Rest To Rest with Veda Rays - An Interview 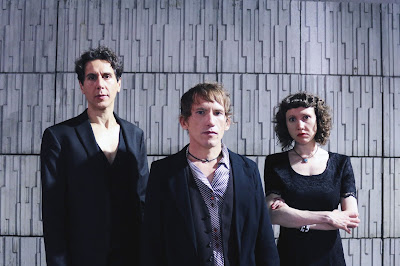 
Q. When did Veda Rays begin? Tell us about the history...
James Stark (vocals and guitar): The group as it currently exists began around 2014. There were several different formations, as well as some early material released as “The Veda Rays”. The history stretches way back to when I started writing songs and making 4-track recordings with Jason Gates (Veda Rays drummer) in our early teens.

Q: Who are your influences?
JS: I started out as a guitar player striving to produce and record my own material, so, people like Jimmy Page and Robert Smith were big influences. The thought that one could create one’s own sonic vocabulary, and, by extension, one could evoke one’s own particular inner landscape of mood, atmosphere, tone and texture, was always very inspiring to me. It is something I chased for a long time and still kind of chase now. As I grew into becoming a singer and songwriter, people like Bob Dylan, Leonard Cohen, Tom Waits and Nick Cave became huge inspirations. I must of course mention Scott Walker, David Bowie, The Velvet Underground, Lou Reed, Iggy Pop, The Rolling Stones, The Doors...all very standard stuff but what can I say. It is what it is. I may as well say The Beatles, at this point. The Beatles. There, I said it. Bob Marley, too. And my laundry list would not be complete without T. Rex, Roxy Music, Joy Division, Siouxsie &The Banshees, Bauhaus, The Fall, PIL, The Smiths, Echo & The Bunnymen, Cocteau Twins, REM, Depeche Mode, The Psychedelic Furs, The Chameleons, Kate Bush, Peter Gabriel, Brian Eno, Sonic Youth, Swans, Jane’s Addiction, Pavement, Modest Mouse, The JMC, Interpol, Pulp, Suede, Radiohead, The Pixies, Deerhunter, The National, PJ Harvey...I’m sure I’m forgetting lots of important stuff. Factory Records. Mute, 4AD, Creation...you get the idea…

Maria Joanna Bohemia (synths, samples): From a keyboardists’ standpoint, my biggest influences are Spencer Krug (Wolf Parade / Sunset Rubdown / Moonface), Dave Formula (Magazine), and Ron Mael (Sparks). Not that my playing is all that similar to any of these people, but they are all inspirational to me in their own special ways. As an occasional lyric-writer, my biggest inspiration is probably Luke Haines (The Auteurs, Black Box Recorder). Again, not very similar to him at all, but I admire how concise (and subversive) his lyrics are while also being very detailed. As a daily life influence, David Lynch is someone I look up to in virtually every way (including hair).

Q. Make a list of 5 albums of all time…
JS: I could never seriously answer this as my response would change from day to day, but, here are five that come to mind right now (in no particular order) -- REM - Fables Of The Reconstruction; VU - The Velvet Underground &Nico; Miles Davis - Kind Of Blue; The Smiths - Meat Is Murder; Nick Cave and The Bad Seeds - Murder Ballads

MJB: As James said, this is unanswerable, but here are five albums I could listen to all the time and never tire of: Scott Walker - Scott 3; Leonard Cohen - I’m Your Man; Mick Harvey - Intoxicated Man / Pink Elephants; Suede - Sci-Fi Lullabies; Wolf Parade - Apologies to the Queen Mary

Q. How do you feel playing live?
JS: For me it is like meditation. You put in so much time and effort to maintain your practice. You hone your ability to simultaneously focus and let go. You think about it a lot when you are not in the act of doing it. You wait around for it a lot. The moment finally arrives, you squirm in your chair and try to settle. You go through all of this in the hope that everything will at once come together and fall away, and you will transcend, if even for only a brief moment.

MJB: I had never played in a band prior to VRs and my live set-up has been through many changes, so I’m still struggling to get my bearings as far as playing live goes. It can be hard to move while playing the synths, so I feel like that at least gives me an excuse to be aloof on stage!

MJB: I’d say there’s more to our sound than may immediately meet the ear. On a casual listen, it’s easy to pick up on the post-punk and goth influences, but there are a lot of textural and atmospheric touches (sample manipulations and the like) that tend to get overlooked. So maybe goth-inflected post-punk, very rich in sound design and with some early REM thrown in for good measure.

Q: Tell us about the process of recording the songs ?
JS: Lately, the demos and beginnings of ideas eventually develop into the fully formed tracks. We record and produce everything ourselves so it’s all very close to home. Basically, initial passes get updated as the pieces evolve, until they get to where we feel they are right.

Q. Which new bands do you recommend?
JS: Some of these bands are by no means new, but maybe not super widely known: Protomartyr, Preoccupations, IDLES, Shame, Bambara, Shilpa Ray, Big Bliss...to name a few, off-hand.

MJB: Bodega - it was wonderful to witness Bodega’s 2018 breakthrough and I look forward to their future. Parrot Dream likewise put out a great album last year. And, there’s not much or any recorded material out there yet, but be on the lookout for Toyzanne and Gustaf.

Q: Which band would you love to make a cover version of?
JS: I’d love to do something by The Chameleons or Psychedelic Furs, perhaps.

MJB: Every year around Halloween, different bands around Brooklyn will do cover sets of a particular artist they admire. We had a half-serious idea of doing The Boatman’s Call - style covers of different Nick Cave and the Bad Seeds songs. That didn’t happen, but I still think it would be fun to do a Nick Cave cover. Maybe “Are You the One I’ve Been Waiting For,” but something from an earlier album would be cool too (James already has “Sad Waters” down!).

Q: What are your plans for the future?
JS: We’re working on new material...shooting for another LP in 2019, maybe some between-album singles or an EP. We are also hoping to release a few more videos for songs from our most recent release For The Rest To Rest, as well as play some shows outside of New York in support of that album.

Q: Any parting words?
JS: Thanks very much to the readers and to TBTCI for your interest in Veda Rays. Dear readers, we currently have no paid publicity agents or anything like that: we are completely independent/ DIY, so, if you like the sounds, please remember...sharing is caring! <3 p="" style="text-align: left;">*
*