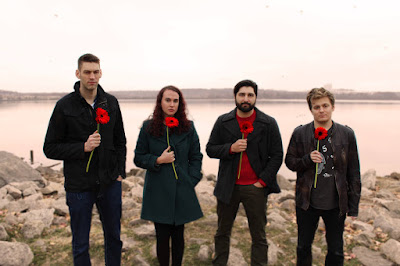 Q. Hello, first of all, congratulations on the new EP, it's really brilliant, what is your analysis after conclusion of EP? Are you happy with the result?
Very glad you enjoyed it! And yes, I am very pleased with how it came out. As you know, we do all of our own recording and production. Part of the reason for the hiatus between releases had to do with a big move to Washington DC. After the move we had a chance to expand the studio and pick up some new microphones and gear. I think that the improvement of the space and process comes through when comparing this record to the first one. We were more successful in incorporating a wider bevy of sounds into mixes which sound clean but still have that lo-fi charm.

Q. How was the process of creating "Holy Gold"?
The process was a little slow- the move meant we had to go through a lineup change. Finding the right people to fill out the group took time, and then it took even more time to gel. There were frustrating points, but ultimately we were able to write at a leisurely pace which let the songs take a pretty mature form before committing them to record. Once Ben Melrod (drums) and Ben Medina (bass) were in place full time, it was a lot of fun to hear where they took the songs I had been living with for two years.

Q. What are the main differences between Holy Gold" and "On Breath"?
Holy Gold is less of a hooky pop record. The songs are a little more reflective, but in general have more nuanced compositions. We pull off some bigger moments (climactically) then anything we had dared to try yet on the earlier record.

Q. What were the influences for creating the new EP?
I hate to put out a record with songs that sound the same, so even though there are only 6 tracks, there are plenty of different influences across them. Yo La Tengo always is a major pull for me, and you can hear their softer side on "Without a Care." "Alliances and Rifts..." finds me doing my best Doug Martsch (of Built to Spill), who has created some of the best guitar music I've ever heard. "Blighted Years" starts off sounding kind of like White Denim but ends in a cacophony that is our own special spin.

Q. What are your plans for 2018?
Well, we need to sell some records, (so go on our Bandcamp and order some vinyl!) which means we'll be playing more shows than we have done in the past, mostly up and down the east coast. We will have a new single coming soon on the heels of this EP, probably summertime. Otherwise, I'm really trying to pull myself out of recording mode and back into songwriting mode. When you do it all yourself, it can be hard to pull back from tunnel vision sometimes.
*
*
*
Thanks