Halloween Forever with Winetasting - An Interview 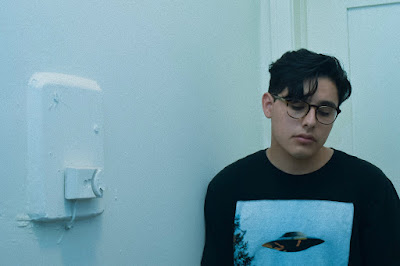 
Q. When did Winetasting begin? Tell us about the history...
1. Winetasting began in August of 2016. It originally started as a project between me and a friend from high school just for fun, called Kind Of. It wasn't planned and none of the ideas were concrete so I decided to take Winetasting on as a solo project. After that happened, I was able to focus more on finishing the songs and rounding them out how I really wanted.

Q: Who are your influences?
2. I take a lot of influence from 80's music. Whether it be the vocals or the instrumentals. I've always been a big fan of synths and the soundscapes they create, so I decided I wanted my guitars to sound like that. I'm also influenced by the minimalism is 90's and early 2000's lo-fi music. I feel that all of these find their places somewhere in my writing and in my music.

Q. Make a list of 5 albuns of all time…
3.My top 5 albums of all time would have to be:
Three Imaginary Boys by the Cure,
Souvlaki by Slowdive,
Loveless by My Bloody Valentine,
Floral Green by Title Fight,
and Pipe Dreams by Whirr.

Q. How do you feel playing live?
4. Sometimes its a bit nerve wrecking but overall its a nice experience connecting with everyone there sonically.

Q. How would you describe Winetasting´s sounds?
5. I'd describe it as a lot of conflict. I'd like to think the guitar melodies are all fighting with each other for dominance but still somehow melt together to create a dreamy atmosphere. The sound is smooth, grainy, sharp, and warm. It's a cluster of textures.

Q: Tell us about the process of recording the songs ?
6. Most Winetasting songs come from a single guitar riff. I'd come up with something I'd like, record it, then keep building more onto it until it sounded full. I usually record a lead riff as a scratch track, record the drums using a MIDI keyboard, then track bass and all the guitars. Vocals I usually won't record until the next morning since I track most of my songs late at night when I won't be interrupted. The whole writing process is nonexistent since I try to record what feels most natural and not overthink.

Q. Which new bands do you recommend?
7. Alvvays, The Bilinda Butchers, and CASTLEBEAT are all great bands to check out! (-:

Q: Which band would you love to made a cover version of?
8. I always wanted to do a cover of a Whirr song because their music has always made me feel lively and emotional. If i had to pick one song it would probably be Ease.

Q: What are your plans for the future?
9. I plan to release an EP soon entitled "Halloween Forever" and play a couple shows around LA starting March.

Q: Any parting words?
10. Thank you to anyone who has ever supported Winetasting or listened to my music. And thanks to my friends for helping me make playing these songs possible, I hope you guys listen to the EP or come see us play. Happy 2018 and thank you Renato! (-:
*
*
*
Thanks