Sangue Neuf with Madonnatron - An Interview 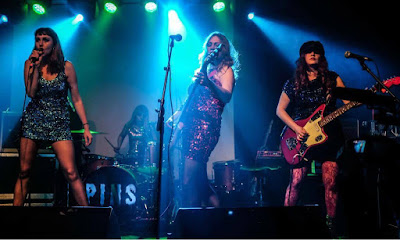 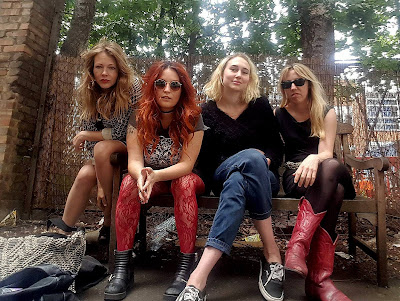 Q. When did Madonnatron start? Tell us about the history...
Charlotte - The band was initially a 3 piece - Beth, Stef, and Melary (our former front person), formed at random after a drunken Trashmouth night at the Shacklewell arms. Beth and I were housemates at the time….she tried to get me to join in the early stages, but initially I flatly refused on account of the fact that a) I couldn't play the bass and b) I thought they were musically insufferable. A combination of desperate boredom and morbid fascination made me change my mind. We played our first gig as a 4 piece after 6 weeks of playing (or not playing) together with our arses hanging out in a shop window. None of us knew how the songs went or what we were supposed to be playing. It was challenging for everybody present. Class and integrity have been a strong point from the start. Joanie joined at the end of January this year and commands total respect for learning everything within 6 weeks having not previously played before.

Q. Make a list of 5 albums of all time…
(we had to change it to 10 because there are too many to narrow down. Dread to think what we’ve left off!)

Q. How do you feel playing live?
This is something that has morphed significantly from our first gig (an utterly mortifying humiliation of the profoundest kind) to our most recent. - We were proud to support The Black Lips for the notorious Fluffer Pit Parties show, which was to commemorate the end of an era for the much loved live music venue The Coronet in Elephant & Castle (soon to be torn down and made into “luxury” flats). This was an amazing experience...it was a 360 degree stage, epic sound, and an incredible line up (Warmduscher and Future of The Left also played). I had so much fun I had to check several times that my ass hadn’t caught fire!

Q. How do you describe Madonnatron sounds?
Uncompromising. Audacious. A manifestation of intent.

Q: Tell us about the process of recording the songs?
This was a slow, grueling and committed mission. We were handicapped by our extreme novice approach to our instruments. We felt technically inhibited and very unsure of ourselves. The recordings took the best part of a year but as we developed as musicians and became more competent, we were able to elaborate on our initial ideas with creativity taking over self doubt.

Charlotte was expecting a baby and heavily pregnant by the time we recorded the final overdubs….(she had a child 3 weeks later!) so that added to the pressure to get the work done in time for release. Also, our former front person left the band moments before the songs were ready to master, so we had to re-write the top lines to lot of the material at very short notice….plus Joanie had a very short amount of time to learn the material (which she did of course and with incredible speed and fearlessness), so it was a tricky process. We are still in shock at how well the record has been received!


Q. Which new bands do you recommend?
PINSPINSPINSPINS!!! PINS! We recently supported these ladies for a part of their UK tour….they mean business! They are totally in control of their sound and they are taking no prisoners!

Sex Cells are just amazing. We saw them play at our album launch and were blown away. We love the dynamic between them on stage.

Melt Dunes create a psyche sonic experience that is cathedral sized whilst being low down and dirty. We’ve played on the same bill a couple of times and there are moments when it feels like you can’t believe that these sounds are actually happening in front of you. It’s immense.

Arxx - they were the other support band when we did the show with PINS in Brighton recently. There are only two of them (Hannah on guitar & Clara on drums) but they sound like a full band and have excellent vocals. These women know how to rock!

No Friendz - their frontman Angus Steakhouse is such a talented musician, as well as being an amazing performer on stage. We just released a split 7” single with them on Trashmouth Records and will play with them at the Trashmouth Christmas Party at the Windmill in December.

Q: Which band would you love to made a cover version of?
We have thought about the possibility of covering a couple of the tracks from the Manson Family Jams...Beth and Charlotte used to perform in The Fat White Manson Family (short-lived but interesting). Obviously there are some dubious connotations, but some of the harmonies are wild and there is something very primal about the flow of these songs

Q: What are your plans for the future?
To keep writing...to continue learning….We are all desperate to travel and do shows in other countries...festivals and stuff. We would love to play Austin Psych fest ……..anywhere in New York, Europe or Japan! We’d love to come to South America! Most importantly for us is that we are able to continue exploring sounds as a band. We love writing together and making music is a wonderful tonic in these suffocating times…..

Q: Any parting words?
A man who never made a mistake never made anything. Don’t let the bastards grind you down.
*
*
*
Thanks