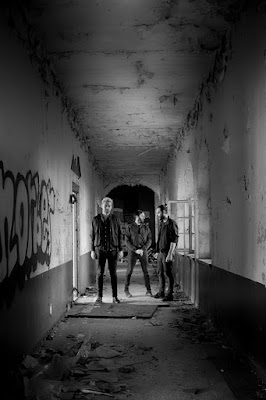 
Immersive Spaces: It’s a tradition to open a XTR HUMAN release with a moody intro. I wanted to stick to that.

Disturbia: Along with “Courage” this is one of the older songs of the EP. We first had a much more punk-ish version with a lot of fuzz sounds. Live we probably killed some guys’ ears during our shows. It was definitely a good idea to reduce that in order to create a more sophisticated sound experience and avoid the danger of tinnitus. Tip: listen to the chorus. It’s Lemmy of Jaguwar crooning these sexy backing vocals.

True Lies: Not only did I show my deep respect for the one and only Arnold (if you don’t know what I am talking about - use Google!) but also musically, to the incredible „A Place To Bury Strangers“(again, use Google or YouTube it if necessary). We wrote the song a while ago when we used to play live with at least five different fuzz pedals. I guess we had to compensate the simple structure of the song with the aggression of fuzz sounds. Anyway the different noise layers are building up dynamics and tension, aren’t they?

Courage: I guess this is the oldest song of the EP. I wrote it maybe one and a half years ago, so we have probably played it live many times. The structure, again, is as simple as possible, so it was necessary to work on the melodies instead. Bass and guitar fight each other and create a brisk sound on the one hand and an energetic powerful one on the other hand.

Limelight: Maybe this is the song that has the closest connection to the songs of our recent releases. After I went through the whole back catalogue of Factory and Creation Records, it finally were the mighty Lemon Drops that inspired me to this song. First I wrote the guitar lick of the verse and found the relating vocal line the next day. In the recording studio we used a Fender twin reverb amp for the rhythm guitar. I liked the sound a lot so I bought the amp for myself afterwards. In the final chorus we used a synth with some guitar effect pedals and sent its signal through my tube amp. The result is a very organic sound that almost sounds like a shoegazey guitar.

Reflections: The last song and obviously the title track of the EP. I always find it difficult to sum up the development of my music by myself, especially in terms of genres. So, I would say this song is the answer to the question of what the band musically stands for right now. One could say we opened up our sound to do pop music. But I am totally fine with that. Also I noticed a tendency of writing songs with a less complex chord structures while concentrating more on catchy melodies and hooks. But this really is something I just see in retrospective. For me this song just developed in a natural way. Maybe this is the core of the EP, that things shouldn’t be forced too much rather than letting them develop as they deserve it. Everything takes its time, and everything has its time.
*
*
*
Thanks