Feel The Energy with Treasure Box - An Interview 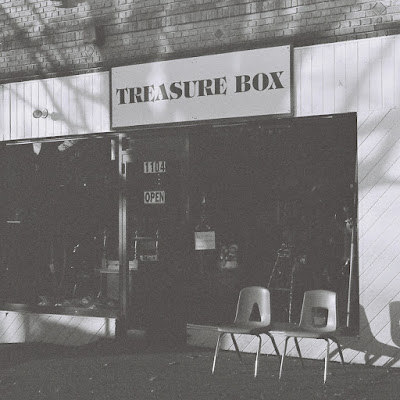 Q. When did Treasure Box begin? Tell us about the history...
Tim: Treasure Box started in the summer of 2016 when I bought my first 4 track cassette recorder. We began by putting together some rudimentary releases and have been progressing and picking up new equipment ever since. The band consists of my brother Colin and I with input from friends at times. We record songs separately in our home studios (Colin in Philadelphia and I in Easton, PA) and also come together to collaborate and change it up. Our focus is to make interesting analog shoegaze/ experimental lofi music at home however we want.

Q: Who are your influences?
Colin: I think The Jesus and Mary Chain and The Cocteau Twins were the ones who influenced us to use old drum machines on our recordings. My Bloody Valentine are a huge influence on the guitar sound. Other artists like astrobrite/lovesliescrushing, Seefeel, Slowdive, Swirlies, and Aphex Twin have inspired me as well.

Tim: There are too many great artists to name but a few who have really stood out to me are Kevin Shields, Richard D. James and Robin Guthrie.

Q. Make a list of 5 albums of all time…
Colin: My Bloody Valentine - You Made Me Realize
Cocteau Twins - Treasure
Dinosaur Jr - You're Living All Over Me
Swirlies - They Spent their Wild Youthful Days...
Bedhead - whatfunlifewas

Q. How do you feel playing live?
Tim: We have yet to play live to an audience but we'd like to. Otherwise I love performing alone at home.

Tim: Textural and a little bipolar.

Q: Tell us about the process of recording the songs ?
Colin: All of our tracks are recorded to various 4-track cassette recorders and feature drum machines. I usually start by recording the drum part in full and then build from there. Adding guitars, bass, loops and vocals etc. Since there are only 4 tracks you gotta get creative, but that is most of the fun.

Tim: I start with the drums as well, sometimes with a guitar loop or something. I try to make each track a little performance on it's own that's sort of evolving throughout so when it's time to mix down, the sound might surprise me. We each have our own collection of guitar pedals, old processors and instruments to work with. Everything is recorded and mixed on tape, only being converted to the computer lastly so we can put it out there.

Q. Which new bands do you recommend?
Colin: This band called Just Mustard recently released a new album that i liked a lot. Scott Cortez is still releasing some of the best shoegaze/ambient with his various projects. I'm excited to hear the new Ringo Deathstarr album as well.

Q: Which band would you love to made a cover version of?
Tim: I'd love to do a super lofi cover of Winona by Drop Nineteens.

Q: What are your plans for the future?
Tim: Our plan is to continue making music, gathering equipment and putting tapes together in an effort to improve to the point where we may influence others to create something of their own.

Q: Any parting words?
Colin: Thank you so much for checking out our music and for doing this interview. I am very grateful for anyone who takes the time to check our band out.

Tim: Thanks again and always remember to fight evil (don't succumb).
*
*
*
Thanks