In This Life with Violet Waves - An Interview 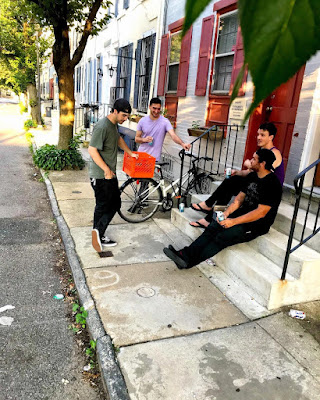 Q. How did Violet Waves begin? Tell us about the history…
John started playing with the original drummer Greg Diamond in 2016, and met Brett and Nate shortly thereafter through Craigslist. They wrote and recorded the Endless EP together during the fall of 2017, and I joined the band shortly after that when Greg started going to school in New York. The current lineup has been together for almost a year. We’ve written a lot of material and played shows consistently, but In This Life/Otosis is the first recording we’ve put out together.

Q. Who are your influences?
We’re all into a lot of guitar-heavy bands like Explosions in the Sky, My Bloody Valentine, Slowdive, Caspian, This Will Destroy You, etc. We’ve all been way into Foxing lately. There was a great period over the summer during which Radiohead and My Bloody Valentine played Philly within three days of one another. That was a really inspirational week for us. Nate tends to use a lot of visuals when describing ideas for songs- a lot of references to space and oceans and mountains. I think we really find our sound in the differences we individually bring to the group. We would probably all pull the music in a different direction if we had full control, so our collective sound comes from the point where we intersect.

Q. How do you feel playing live?
Energized. We get pretty into it when we play. Lately we’ve been focusing on making our show more cohesive lately and working to fill in the space between songs so things flow as a single fluid set. The physical set lists are twice as long because they now include notes on what we’re doing between songs. Playing live is so much fun, especially in Philly. People are really supportive in this town.

Q. How do you describe Violet Waves’ sound?
Cathartic.

Q. Tell us about the process of recording the songs.
The writing process was pretty much entirely from jamming, which is our typical way of doing things. Sometimes someone brings in a riff and we work off of that. We tend to loop the same few measures over and over while people figure out their own parts for it, which makes the writing process pretty fast but also organic and keeps us from overthinking things. We recorded the instrumentals in our practice space, which is inside an old warehouse in Philly. It’s a pretty small room with just the right amount of natural reverb in it. It’s not too dead, but also not so resonant that a band like ours becomes too muddy. There were a lot of small mishaps along the way that go along with recording in an old space you share with several other bands- lots of tiny rattles and creaks all around the room. We accidentally left the air conditioner running in the background of one of the drum tracks, which inevitably ended up being the best take. Nate did all the sound engineering and worked around all of it. He did the all the mixing too. We had a very long text exchange full of different onomatopoeias trying to describe the specifics of certain snare sounds or exact overdrive tone. He did a really amazing job of listening to each member of the band and getting a sound we were all really happy with. We had both tracks mastered by Corey Coffman of Gleemer, and the results were exactly what we were hoping for.

Q. Which new bands do you recommend?
Definitely Lovelorn. They’re a band out of Philly comprised of three of the four members of Creepoid. We were at Creepoid’s final show earlier this year at a 1,200 capacity venue, which was amazing. Now it’s great to see Lovelorn play more intimate shows around town. They opened for A Place to Bury Strangers at a house show a few months ago and blew everyone’s minds. Gleemer (Colorado) is also a band favorite. There are so many great local bands that are worth checking out. We just played a really fun show with Mesa Glow, Pale Shade, and Elbowache, who are all from Philadelphia or New Jersey. Slenko & McKeys lays out some great dark bootgaze. I listen to them while studying all the time. A Film in Color is another Northeast band that’s doing great things right now. Our band group text is mostly full of self-deprecating post-rock memes and links to obscure shoegaze music we find on the internet. We’re all looking for new music pretty much constantly and we enable one another in our internet deep-dives.

Q. Which band would you love to make a cover version of?
Probably something by Radiohead. We play “Weird Fishes/Arpeggi” constantly in practice. Any one of us will start a riff from the song and we’ll all join in and start playing it immediately. We like to choose songs that pay tribute to our favorite bands but we can also make our own. We used to cover “Scientist Studies” by Death Cab for Cutie. It was fun to stretch out and make really loud during the instrumental measures at the end.

Q. What are your plans for the future?
We’d like to put out a full LP and possibly do some regional touring. Lately we’ve been trying to play shows around Philadelphia with bands that are coming from a similar musical standpoint. We’ve been on a lot of very diverse bills, which is awesome, but it’s really something special when all the bands are genuinely excited to hear everyone else and not just focused on their own set.