Contusiones with Queridos Edificios - An Interview 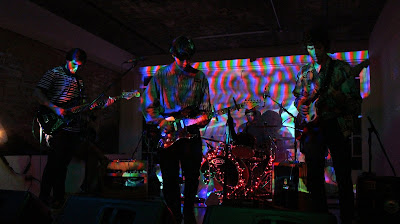 
Q. When did Queridos Edificios begin? Tell us about the history...
A: Queridos edificios officially started on 2017, January 9th to be exact but it's a result of various projects that I tried to have with some friends, we never played live or recorded something but we learned a lot about how is it having a band and how influences of every member goes in final product. The first project was a intend of psychedelic pop sounds and the other one completely different with Black Sabbath as major influence haha we used to have a lot of fun playing all evening, eating junkie food and watching other bands videos but sadly I saw that none of the projects had the intentions or responsibility to have great things like recordings or videos and all that so I formed QE with my former drummer Castro and after some flash members we are with Diego Cubillo as guitarist and Alberto del Valle as bassist. We've recorded our debut Ep Contusiones and right now it seems to be a very strong formation.

Q: Who are your influences?
A: I'm sure our major influences are a mixed of new and old Shoegaze bands like Deerhunter, Slowdive, MBV, The Horrors, DIIV, Beach Fossils.

Q. Make a list of 5 albuns of all time…
A: I would say in order of favorites:
1. Halcyon Digest/ Deerhunter
2. The Horrors/ Primary Colours
3. Pygmalion/ Slowdive
4. Loveless/ MBV
5. Clash the truth/ Beach fossils

Q. How do you feel playing live?
A: I thing I'm speaking for all here; at the beginning al little nervous, cuted voice and all haha but after some intro jam we feel more and more secure. At the end we just joy a lot playing and watching peoples reactions, whether they're good or bad it's always fun haha.

Q. How do you describe Queridos Edificios´ sounds?
A: Hmmm I would say it's a mix of ambiental and a little dark sounds or at least that's the line we're having now. But mostly ambiental, that's probably the must important thing we try to reach.

Q: Tell us about the process of recording the songs ?
A: i think there's not a stricted path but it's usually an idea that surges while playing in my room and maybe I got to rehearsal with a whole or partial idea and they complete the other part. Sometimes someone also bring back melodies, basses or riffs and the rest put their own effort.

Q. Which new bands do you recommend?
A: We really recommend Dylan Thomas Ep "Suceso en la plaza" and also Sway's first Ep "Imágenes violentas" (it would be better if you get to see them live some time, it's a really exciting thing)

Q: Which band would you love to made a cover version of?
A: I'd love if we ever do a version of Vad hände med dem by The Brian's Jonestown Massacre

Q: What are your plans for the future?
A: Our closest future is to have another single, maybe another video and for long terms we would really like to travel and have a LP.

Q: Any parting words?
A: We really want to thank you for the interview and we hope everyone who listens our Ep gets to like it. Thank you so much and greetings from SJO! Bye :)
*
*
*
Thanks