Go Go Pepper with The Hannah Barberas - An Interview 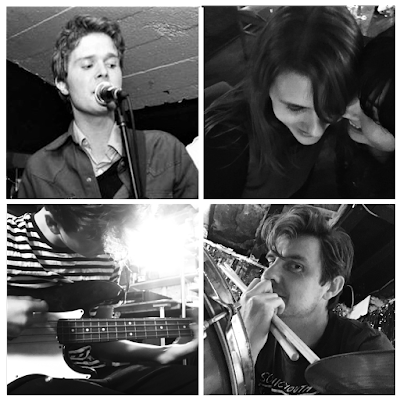 
Q. When did The Hannah Barberas begin? Tell us about the history...
The band kind of started by accident! In November last year, Damien was approached to record a Christmas song for Emotional Response’s festive album. He then asked the rest of us if we wanted join in. It was a blast and we had such fun we ended up doing a whole album’s worth over five nights. The initial idea was to give it to friends and family. It was the first time we’d recorded in the basement, and we were really pleased with the sound we got, so we were like, why not carry on? It was May this year before we actually got together again and came up with a name, but by then we had a bunch of songs written.

Q: Who are your influences?
We all love post-punk and early 80s indie. Bands like Buzzcocks and labels like Postcard were putting out records that no major label ever would have. They were self-financed, self-recorded and even self-distributed - taking boxes of records around the country to deliver by hand to the record shops. 90s cassette culture too was really important to us as well. Bands that had no chance of any sort of commercial success, but were really, really loved by a handful of people.

Q. Make a list of 5 albums of all time…
This is so difficult! Ok, let’s go with…

Orange Juice - You Can’t Hide Your Love Forever
We just love Edwyn and James Kirk’s guitar playing, and they both have such great voices. You could never get tired of hearing this album.

REM - Murmur
They became such a huge band of course, but on the Chronic Town EP and the first couple of albums they just sound like four people playing in a room. But playing truly amazing songs, of course.

Sam Cooke - Live at the Harlem Square Club 1963
This album crackles with live energy - the band are so tight and Sam’s voice is incredible, but it’s the sound of the audience that makes it such a compelling listen. Such stomping crowd pleasers, it’s great record to play loud and dance to. And it makes you want to shout YEAH! Unbelievable that this recording lay unreleased for so long.

The Mamas & The Papas - 20 Greatest Hits
Ok, not a proper album, but played it to death, it has certainly been a huge influence. 10 songs on each side, all bangers. Cost 75p from Barnardos. TheLovin’ Spoonful’s Greatest Hits too. Really varied, and great song-writing.

Erm, I think we sneaked in six albums there!

Q. How do you feel playing live?
We have yet to play live as The Hannah Barberas, not in front of other people at least. We have done in previous bands which was great fun, but we’re not bothered about doing it again just yet. We’re like The Beatles after 1966. Just focusing on recording new songs. Yes, we did just compare ourselves to the Beatles!


Q. How do you describe The Hannah Barberas´ sounds?
We like to think we sound like you’d expect a band called The Hannah Barberasto sound. Varied, but always catchy, fun and fast. Not just the playing, but the recordings too. We try and record mostly live with as few takes as possible. That way, when we’ve finished we are still excited to hear the songs again. It means they’re not perfect, but they have an energy. At least, we think they do. We love the sound of the old Peel Sessions, where there was often a more stripped-back sound. The bands would do fours songs in an afternoon, so had less time to seek perfection or record a thousand overdubs. Adrenaline becomes part of the mix. The live sessions on KEXP capture a similar sort of energy.

Q: Tell us about the process of recording the songs ?
We record everything at home on an 8-track, usually late at night. Although at the moment two of the tracks don’t work, so it’s more like a 6 track. We need to save up for a new one really. What’s great is recording a song, mixing it in a week or so, and then putting it out there. Sites like Bandcamp and Soundcloudmake it so easy to share your music. There’s no waiting like there is with physical releases. The immediacy of it is really appealing. We’re recording our third EP tonight, and it’ll be on Bandcamp in a few weeks. That’s cool isn’t it?

Q. Which new bands do you recommend?
Not a new band, as such but the new Sauna Youth album is brilliant. They are completely ace live too, such an energy. Also Hairband. They're a sort-of Glasgow super-group. Their first EP is out soon on Stephen Pastel's Monorail label, and it's just ace.

Q: Which band would you love to made a cover version of?
We’ve done a few covers already. We pick songs that a fun to play and haven’t been done to death. We did Go Go Pepper by Tip Top Planets. It’s over twenty years old, but we don’t think anyone else apart from them had ever played it. But it’s an insanely good song. The band were really supportive of us, which was dead nice. Because of Naomi's beautifully strong Japanese accent, the words were quite tricky to make out in places, but her and Koji were really helpful and sent us the lyrics. When we read them there were lines like “my heart feels like sneezing with joy”, which we just thought were wonderful and made us love the song even more. So, let’s say we’d love a Japanese band to cover one of our songs in twenty years’ time. That would be ace! Or Taylor Swift. Then we could buy a new 8-track with the royalties!

Q: What are your plans for the future?
As we said, the next EP is going to be out in November, a few weeks earlier on Bandcamp. We want to do another Christmas song. Maybe with Taylor Swift?!

We do want to put out a full Hannah Barberas album next year, but we’d like to release it on vinyl. Another thing to save up for. Or to take out of the Swiftie Christmas royalties!