Abattoir with Aufbau Principle - An Interview 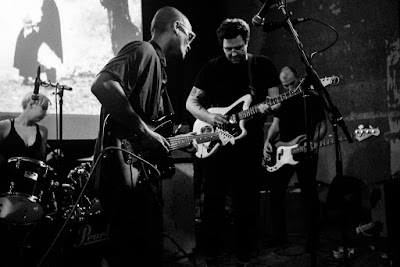 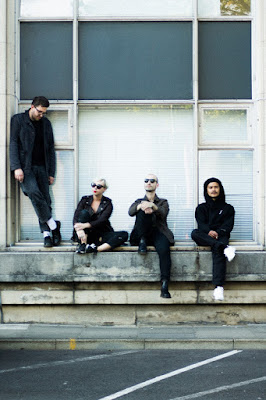 Q. When did Aufbau Principle begin? Tell us about the history...
I (Kieran) had been working on a solo project under the moniker “Slow Bleed” and wanted to expand the project to have a band behind it. I knew Ruth from the art scene in Glasgow and had found out she played drums and invited her to jam out some of the tracks I had been writing. I had asked a couple of people to play bass on it but they fell through due to other commitments and then I on the off-chance asked Stefano if he fancied trying out the bass. We had jammed together both on guitars and I knew he had played guitar in other bands before but he was up for trying our bass guitar and he took to it very quickly. The first practice we had together I think we wrote like three of the five songs on the GODHEAD EP, or at least started fleshing them out. It felt like a very natural process and instant synchronicity. “Better than nothing” and “tear it from bone” off our first demo and GODHEAD EP were songs we had adapted from the Slow Bleed project which was a good jumping off point but I think aesthetically and sonically we have developed a lot in less than a year of playing together. For the GODHEAD EP Stefano suggested that his friend and former bandmate Qaiyyum should record it for us. Me and Ruth instantly clicked with Q and we all sort of simultaneously suggested that he join the band as another guitarist. Since Q joined the band the sound has developed a lot from the super stark lo-fi sounds of the GODHEAD EP and is contantly evolving and remaining exciting for us all to write and play.

Q: Who are your influences?
I think our list of influences could be an article in itself but off the top of my head and from our “aufbau inspo” playlist on spotify it would be: The Cure, BJM, Test Icicles, Interpol, Joy Division, Pixies, The Distillers, The Black Angels, Wooden Shjips, Velvet Underground, Sonic Youth, Broadcast, NEU!, Yo La Tengo, The Church for Kudes and many many more!

We played a support slot for The Underground Youth and felt very inspired by the energy they brought to the stage and me and Stef have been pretty hooked on Girls Names recently, especially the Arms around a Vision album.

Q. How do you feel playing live?
Locked in, like we are all contributing to creating something necessary and energetic. Every time we play it changes and we improve upon the set. I personally feel connected to the other band members through the sound and that lifts me out of some kind of existential malaise of the everyday. Its like a collaborative art practice but the connection to the audience is far more tangible and the feedback is immediate and real.


Q. How do you describe Aufbau Principle´s sounds?
Here are some answers from our group chat:
“Really good”

“A night in on Ibiza with closed curtains and the worst coke and a cafe del mar cassette playing in somebody elses room in the shitey hotel you’re staying at.”

“Like a smacky ecto crushed up and snorted through a costa loyalty card.”

“The girl from ipanema put through a cathedral reverb”

Q: Tell us about the process of recording the songs ?
Our first demo we recorded on a Coomber tape recorder I bought off a work mate and we just placed it at the back of the room and played to it. Its pretty gnarly sounding but people seemed to dig the sound. For GODHEAD Qaiyyum recorded the Bass and Drums together in the practice space and then overdubbed the vocals and guitar parts in Stefanos flat. And then for our latest release “ABATTOIR” we went up to Dundee to record with my good friend Callum Mackie who I used to play in a traditional folk band with and we recorded it live then overdubbed the vocals afterwards. I think we are pretty efficient at recording and like to try keep it fresh with as few takes as possible. I think we one-shotted 3 of the 5 tracks on that EP and I think there is an immediacy to the sound which can get sapped away a little bit with too much overdubbing and re-recording.

Q. Which new bands do you recommend?
We are playing with GHUM next week and love their sound. I am a big fan of the Glasgow music scene and I think Herbert Powell are on of the best live acts I’ve seen in that city. Charrette (new project fronted by Ewan Grant formerly of Algernon Doll), Kaputt, Im excited to see the new band Gimp World play as I havent caught them yet but it consists of most of Anxiety who were one of the best bands I had seen. I really like Warsaw Pact from California, they have a cool sound. Tights, Overwhelmed, Brain Fluid, Cartilage.

Q: Which band would you love to made a cover version of?
We are working on a cover of Earth Angel by Marvin Berry.

Q: What are your plans for the future?
We have another EP in the works but havent had a chance to properly sit down and get it written yet. Stef has a baby due in the next month so that will probably take priority! We support GHUM on their tour for their Glasgow show on Wednesday the 12th at Glasgow Autonomous Space and the next morning we fly to Portugal to have our first international show in Lisbon on the 16th of September which is very exciting. Our friend Sarah is taking over bass duties for that and then we have a Halloween show which should be very fun as well.