9617 GRAHAMCHAPMAN with Start Together - An Interview 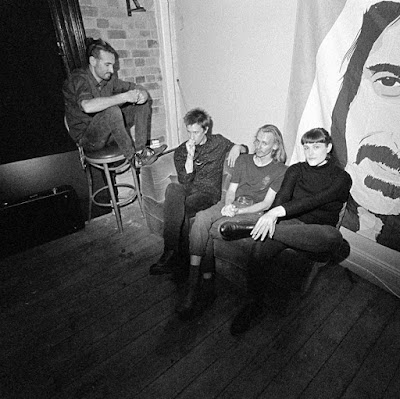 
Q. When did Start Together begin? Tell us about the history...
Start Together began in October 2016 - Gerard (guitar, vocals) had previously played in a band with James (drums) and when that band ended they reached out to Emma (bass) and to create a new band. They jammed on songs Gerard had been writing at James’ house at Mt Glorious (just outside of Brisbane, Australia) on the weekends and a couple of months later Gerard asked Demetry (guitar) to join the band. Their first live show was in June 2017, and since then we have been playing many live shows, recording and releasing music.

Q: Who are your influences?
The Cure, Sonic Youth, Au Paris, Fugazi, Sleater-Kinney (that’s where the name ‘Start Together’ comes from.

Q. Make a list of 5 albums of all time…
Emma: An impossible task! Some of my favourites would be Silence Yourself - Savages, Slowdive - Slowdive, Nothing Feels Natural - Priests, In Bloom - Beach House, Tapestry - Carol King.

James: Lately i’ve been listening to Relationship of Command - At The Drive In, The Shape of Punk to Come - Refused, III - Badbadnotgood, The Mouse and the Mask - Danger Doom, Animals - Pink Floyd

Emma: We are very comfortable playing live - that’s mostly what we do. It feels good to take the audience on a journey.

Demetry: Playing live is extremely enjoyable. During rehearsals and recording I'm usually thinking about changing parts or experimenting. Playing live allows me to just play the songs without thinking too much.

Q: Tell us about the process of recording the songs ?
Emma: Gerard is the main songwriter - He brings the concept of the songs to the rest of the band at band practice and we each add of own parts from there, but we try to follow Gerard’s intent of how the song should feel and sound.

Q: Which band would you love to made a cover version of?
Gerard: Curtis Mayfield

James: A song by Doves.

Q: What are your plans for the future?
Emma: We are currently in the studio right now recording an album, which will be released next year. We’d love to tour soon.

Demetry: We often dream about touring overseas - more like a band holiday rather than making money.

Q: Any parting words?
Demetry: When our album comes out you should probably listen to it while walking the dog or driving to see someone you love.

Thankyou for the interview!
*
*
*
Thanks