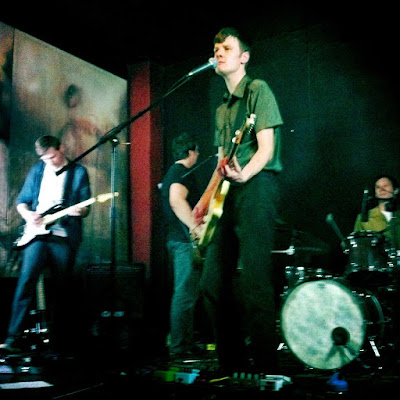 
Q. When and why did you choose "Spinning Away" to make this version?
Years ago our guitar player (and ex-Hinterland member) John Lucas showed me Spinning Away, saying he'd always wanted to cover it. I've since come to love the rest of the album it comes from, Brian Eno and John Cale's Wrong Way Up, but Spinning Away's vocal melody is tailor-made for a shoegaze reimagining. In 2016, we worked with Felix Fung at Little Red Sounds, an amazing studio in Vancouver with a very vintage rock & roll feeling, planning to record two songs: Broken Head for TBTCI's Catherine Wheel compilation, and In The Park, which was released on TBTCI's shoegaze compilation earlier this year. Felix is a wonderful producer and a fan of Spinning Away, so I suppose it was inevitable, really.

Q. How was the creative process?
The other two songs we did during the sessions with Felix were recorded with the entire live band, which was something new for us since most of our recordings tend to have me (Adam) playing most or all of the instruments. For Spinning Away, Felix and I just started jamming out the chords using different instruments lying around the studio, and when friends would drop by the studio we would invite them to play on the song. Eventually we had a great roster of people on it; in addition to Felix and myself, we had Phil Western (great electronic musician and member of Download) playing some cymbals, Emily Bach from Dirty Spells on violin, Eric Campbell from Eric Campbell & the Dirt on vocals, John Lucas on guitar, and Alex Kennard from Ludvico on vocals as well, although his parts were recorded on the other side of the country. Musically, we focused on the melancholy element of the vocal melody. The guitar on the original track gives the song a sunny, reggae-like feeling - that was the first thing we decided to leave out. Then Felix suggested we change the bassline and play different chords between the guitar and bass to give the song a different feeling in the second half of the song when the wall of vocals comes in. I think it worked wonderfully and couldn't​ be happier with the results.
*
*
*
Thanks