Dominoes with Peppermint Showers - An Interview 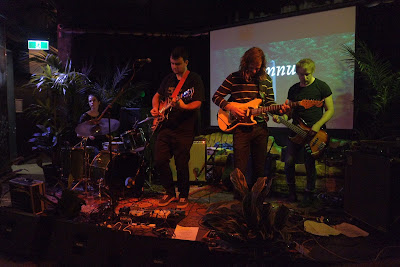 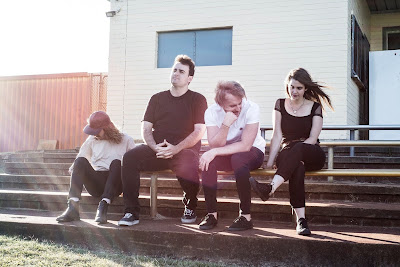 Q. When did Peppermint Showers start? Tell us about the history...
Peppermint showers was an idea that came upon Sandon and I when we were still playing together in Lanark in 2015. All we really knew at first is that we wanted to work together on a project but that was it really, we starting listening to each other's demos and it kind of developed from there. We starting meeting up once a week in Jan of 2016 in the sun room at my house and just kind of worked away at our ideas and form songs out of them and that's how the overall sound of the project started to develop. We then named the band out of a funny conversation I won't go into and started sending the recordings to our friend Rob Stephens who mixed the songs and now a year on we have a finished ep and a bunch of songs for the next record.

Q. Who are your influences?
Thats a tough one, musically I would say we draw inspiration from artists such as lotus plaza (lockett pundt of deerhunter), Fog Lake, Winter (LA), Real Estate.. but at the risk of sounding a little pretentious we draw a lot of our inspiration from imagery, be it photography or film or a memory.. even something we are seeing at a present moment, the music we make kind of acts as the soundtrack for whatever is going on at the time.

Q. How do you feel playing live?
We really enjoy playing live, our music is constructed in a home studio so the live aspect comes second and its really nice to kind of pull a song apart and put it back together again, its really fun to show people our songs in a live setting.


Q. How do you describe Peppermint Showers sounds?
Its always hard to answer when someone asks what you sound like, I guess its dream pop suited for melancholia addicts, a lot of reverberated guitar and musical moments that make you really think about what the hell you’re doing with your life.. but honestly I have no idea.

Q: Tell us about the process of recording the songs ?
So we basically record everything at home and kind of construct songs piece by piece rather than rehearsing them in a room and recording them later. Myself and sandon both have a basic recording setup at our house so we kind of start songs on our own sometimes and other times we write them together. Once we suss out the bones of a song we usually put it on the shelf for a week or two and then re visit it to add another layer etc until we have to decide that its finished.

Q. Which new bands do you recommend?
I don’t know about new bands but some local Perth bands that should be looked into are Childsaint, Dear Creature, Apricot Rail, Bells Rapids, Methyl Ethel.

Q: Which band would you love to make a cover version of?
We have been tossing and turning with that idea for a while, at the moment we are thinking either Chains by Tina Arena or Teardrops by Womack and Womack


Q: What are your plans for the future?
We finished a 5 track EP a little while ago, we have released ‘Dominoes’ and will be releasing the full length EP in the not too distant future, amidst playing some more live shows we are already deep into recording our second record.