White with The Name of the Band - An Interview 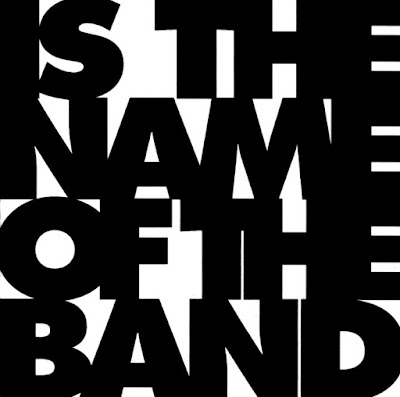 Q. When did The Name of the Band start? Tell us about the history...
Actually it’s not a new project, it started 10 years ago. I bought an old Fender Jazzmaster and had a vague idea of a song, but the system I was used to record demos broke down, so I took the little iMac with Garageband I had nearby. It immediatly gave this sound. I don’t mean this software has amazing sound qualities, but everything is simple with it and it goes quick. I had the song, loud, different, direct and true, and an opened field to dig in. Then it took time to find the good formula to play it on stage and above all, the good persons to play with (thanks so much to Marie and Matt). I have to admit that we play and tour with Maria False and with Dead (other bands I’m involved in), so we don't have a lot of time to spend in forming another band.

But the good point is that, after these years, we can rely on about 70 songs, a well-defined sound and a good stage experience for all of us. It makes that The name of the band is an easy band, everything goes quick and with a lot of fun.

Q: Who are your influences?
Well, talking about influences is always difficult. I mean I don’t think we play to do the same we love to hear. We can debate about what rock-and roll is, but what is clear is what it is not. This music is a reaction against something, and personally I feel much more influenced and motived by all the bullshit sounds I can hear all around me.

But to be honest, I'd like to talk about The Pixies. Not because this band is one of my favorite bands, but because I realised with them that doing music was possible. No need to have a good technical level (well it seemed at the time), a sophisticated sound, expensive material or fancy outfits to make a good band. Without them, I think I would have just continued listening music, without the idea that I could make it.


Q. Make a list of 5 albums of all time…
I’m afraid I don’t know a lot of things about music, so I’m not very credible. I spend a lot of time doing and playing it and I do not have time to listen the others. When I do, I try to understand how they made it, that’s crazy. To answer your question, I can talk about Question Mark and the Mysterians and their «Ninety-six tears». They have never made something better than this single and it’s my favorite rock song. More than love it, this song is still a mystery for me, I can’t understand how it works so well without so much objective qualities in it. It’s magic and very fascinating…

Q. How do you feel playing live?
Exciting! As I said, the band is easy and the sound is powerful. We all know well each others and all have other bands. The name of the band is a freedom to test other things, things we aren't used to practice in our other bands. For example, a lot of parts in the show are not planned. Everything depends on the feelings and the sound we can have on stage, especially because of these guitar amp feedback effects we use.

Q. How do you describe The Name of the Band sounds?
Well, firstly it's based on this wide and wild amp guitar sound. It takes a big place in the mix because it’s never compelled as it ordinary can be. It stays very organic and free. We use special guitars for that, a lot of valve preamps, valve amps and large frequency range cabs. In opposition, we work on very controlled drums and vocals. That gives this tension. Well, it supposed to do that effect, hahaha.

About the songwriting, the idea is to play with rock-and-roll more than to play rock-and-roll properly speaking, as poetry and language in a way. It means that we take the usual structures, shapes or clichés of rock music and play them differently to write our songs. So there’s always a distance I guess, but rock-and-roll is almost 70 years old now and it's a nonsense to try to play this music nowadays like it was a new thing. Everyone know what it's dealing with. You can also understand our very stupid band name with this explanation I think.

Q: Tell us about the process of recording the songs?
It’s very quick. We always try to keep the first idea of the song. We record and exchange our parts by the network and then it is quickly mixed, song by song. But these are not demos, they are not supposed to be re-recorded later in better studio conditions. It has to stay rough, something in between, a big sounding demo or a cheap production, as you want. Here again, there’s a format to invent.

About the sound, we never change the tool : same guitars, same amps, same mics… The creative part is not on this side. We don’t care about the sound, it’s just a vector. We record very loudly and noisy and then quickly shape and organize instruments together in the mix. When you start to understand the tune, get the lyrics and the rhythmic pattern, the mix is ended.

Q. Which new bands do you recommend?
I have some difficulties with a lot of new bands. It seems that the novelty and the strength come from the olders nowadays. May be that’s because these old artists have nothing to lose now… (I’m thinking about the last Alan Vega «It» LP, it’s very hard and it goes very far but this exemple is may be too excessive). I see a lot of new bands choosing very comfortable sounds and weak proposals. May be that’s an effect of the music industry crisis, but these bands are afraid to lose something they don’t have. Crisis is just another word for change. To react to that in our way, we have formed with other bands the collective «Nøthing». We have created it to play, communicate and spread our sounds in an easy way. It works like a label, even if formaly it’s not. You can take time to hear these bands.

Q: Which band would you love to made a cover version of?
I don’t know… But there was this nineties euro dance hit of Culture beat, «Anything», the vocal line is pretty fine, I would like us to try to do something with this, one day.

Q: What are your plans for the future?
We have no plans. I learned that this is the best way to last.

Q: Any parting words?
Well, don’t listen rock music, do it. And don’t say that’s difficult, it’s false, rockers are all slackers.
*
*
*
Thanks