Recover with Motorcade - An Interview 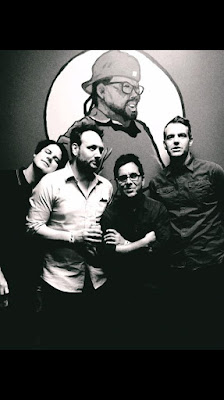 
Q. When did Motorcade start? Tell us about the history...
Motorcade initially started with James, Andrew and myself a few years ago, wanting to do a new project. We’d all been friends for a really long time, went to college together and have continued to be friends for many years. So having this history between us we know our likes and dislikes and thought it would be a good idea to put something together.

Things progressed kind of slowly at first between us just hashing out a few ideas and then we decided to get pretty serious about it. James started sending out pretty fleshed out mixes of songs and/or ideas and we started chiming in opinions and eventually made our way into the studio to start cutting drum tracks and vocal tracks. Around this same time, is when we pulled in John who is also one of our very close friends and my neighbor, and he’s also been in bands for years as well, like the Deathray Davies and Apples in Stereo. We knew he’d be a perfect fit being a solid player and an all around great guy.

Both he and James are sound engineers and work in their own respective studios here in Dallas. So having access to the studios we were able to track drums and vocals at our leisure and then James just mixed everything.

So even though Motorcade is a relatively new band, it feels like we’ve been doing this for quite awhile now, but in a good way. Basically, just because we’ve been chipping away at this record for a long time and now we’re ecstatic that it’s finally coming out.

Q. How do you feel playing live?
Anxious

Q. How do you describe Motorcade sounds?
The best bits of the late 60s and early 80s all mixed up and recorded well.

Q: Tell us about the process of recording the songs ?
James: I would do a very fleshed-out, glorified “demo” of a song which would cover all the instruments plus a programmed beat. Then we’d record drums for it, then vocals.

Q. Which new bands do you recommend?
Motorcade

Q: Which band would you love to made a cover version of?
Magazine-The Light Pours Out Of Me

Q: What are your plans for the future?
Promote the record to the best of our ability, expand the live show with visuals and that. See if anyone wants a follow-up record and start on that.