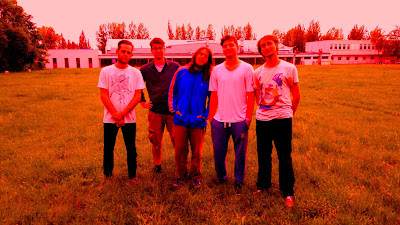 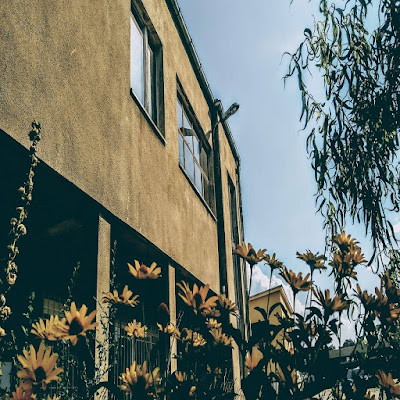 1. When did Pensjonat start? Tell us about the history...
Pensjonat Was formed in Oktober 2015. The band came out of the desire to make simple catchy songs. However, we wanted to add a little more chaos between the planned initial ideas. Most of songs were born in Kuba (guitar) house. It was playing on the couch in front of the TV, just chillin. when a couple of riffs, chords and chorus Was ready, Mateusz (second guitarist) added great parties based on the combination of noise and melodies. We knew each other before so we knew after a few sentences what we were looking for. The idea of who will sit behind the percussion was born after the second or third rehearsal. Tomek (drummer) Naturally filled and twisted the dynamics of the songs. When it comes to choosing the vocalist it took a little longer. Because in our city (Poznań) it is easier to find someone who wants to sing Guns and Roses songs, not noise pop things. At that time Mateusz wrote a couple of lyrics about spending "summer in the city" (thats our EP name) After a few months of playing we heard Marcel (bass) and Dziuda (vocal) got our records from rehearsals. These were bad quality recordings from the phone. So if that convinced them we invited them with open arms.

2. Who are your influences?
We are at the age where we listen to every kind of music. Of course our EP is distorded guitars so we say broadly defined Indie\shoegaze\DIY bands. From MBV to Fugazi, from Spaceman 3 to Broken Social Scene. When we meet with a group of friends you can hear everything from classic shoegaze bands to rave music.

4. How do you feel playing live?
It's hard to talk about a particular feeling. In the loudly parts, We want to create a big wall of sound to create a little chaos also in our heads. In the soft part just smile and relax.


5. How do you describe Pensjonat sounds?
In the strict sense it's 90's sound revival. Bunch of distorded guitar with no solos on it. Just four minutes of simple riffs in each song. Mentally Pensjonat is just the present state of our feelings in our city. Place by the river, parks, trams, dirty sidewalks, variable weather.

6. Tell us about the process of recording the songs ?
It took us only two days, because we've been playing all of the song for over a year. We were recording in the studio in the center of town. Zero rush, beautiful weather, lots of burned cigarettes. All instruments were recorded separately, so when someone was recording, rest of us could just laugh and gossip again.

7. Which new bands do you recommend?
Check out our bands from Poland like "Evvolves", "Złota Jesień" and "Dyshon Sphere". Great guitars, noise and a little bit of psychodelic

8. Which band would you love to made a cover version of
Maybe all the songs from our favorite albums list would be interesting to record or play live. But the cover song would have to surprise the listener. We think it would be great to convert somebody's emotions to the opposite. Check what band like Cloud Nothings did whit Coldplay song in video "Cloud Nothings deliver a polarizing take on Coldplay’s “Clocks”" It's hillarius.

9. What are your plans for the future?
Play a lot of concerts and record fast another EP and album. Simple as that

10. Any parting words?
Thanks for the opportunity to reach your readers. We have never been in Brazil and we would like to find out if similar music taste can be found in your beautiful country
*
*
*
Thanks