Voices with Middle Management - An Interview 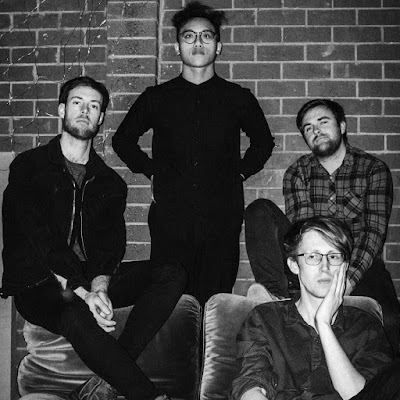 
Q. When did Middle Management begin? Tell us about the history...
Middle Management began in late 2016. Three of us (Stefan, Sam, William) met up through a gumtree ad posted looking for like-minded musicians. We started with a beer and a chat about music and soon after we started to jam. At this stage we didn't have a bass player but after writing a few songs we created a new ad and found our bass player Josh! So the full band came together in early 2017 and none of us had met before we formed the band. Since then we've just been writing, recording and gigging. Good times!


Q: Who are your influences?
Our influences vary widely and we are constantly showing each other new bands and artists. Our main influences would have to be: Total Control, King Gizzard, Pond, The Church, Rowland S Howard, The Smiths, The Cure, New Order, Joy Division, Savages


Q. Make a list of 5 albuns of all time…
Soft bulletin by The Flaming Lips
Pornography by The Cure
Songs of Leonard of Cohen by Leonard Cohen
Blonde by Frank Ocean
Sound of Silver by LCD Soundsystem


Q. How do you feel playing live?
We really enjoy playing live. We tend to have a lot of fun on stage and like to move around a bit. Our live sound is a little less dreamy and a little more energetic than our recorded songs.


Q. How do you describe Middle Management´s sounds?
Our sound has grown and developed a lot since the early days. The first few songs we wrote were slower with a real post rock/shoegaze vibe. Lots of big and loud sections with some heavier guitar and drums. Over time we've slowly started to head more towards a post-punk/indie/dream pop combination. It's been called 'dream rock' which we're not totally against. 'Voices' has a bit more intensity and grit than our previous releases and this is the sort of direction we're going with for our song writing at the moment.


Q: Tell us about the process of recording the songs ?
We recorded all of our tracks thus far in a garage turned studio early this year. We released 'return' and '21' in February although we also recorded the instrumental tracks for Voices in the same session.

We weren't quite sure where to go with it vocally so we kept it in the bank until we were happy that it was fully complete. We recorded the vocals for Voices at Williams house in a makeshift studio in one of his spare rooms. It actually turned out great!


Q. Which new bands do you recommend?
There are so many amazing new bands but the ones that come to mind are: Mothers, Tram Cops, No Sister and Candy. Check them out!


Q: Which band would you love to made a cover version of?
In the 20 months or so that we've been together, we have never actually played a cover. If we did, we would love to play something by New order.


Q: What are your plans for the future?
We've been busy writing a bunch of new songs and we're looking to put them together into and EP some time next year. Hopefully early-mid 2019. Apart from that just keep playing shows and try to get our music out there!


Q: Any parting words?
Thanks heaps to Renato for the opportunity and the great interview. Thanks for reading!
*
*
*
Thanks