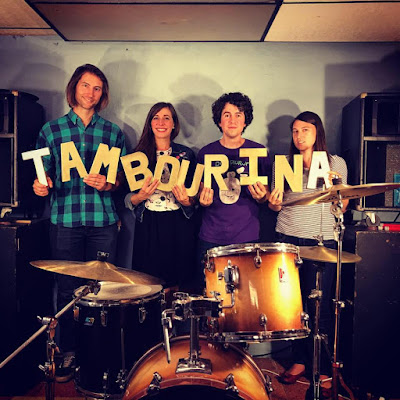 
Q. When did you start created music? Tell us about your history...
I’ve been singing since I was a little girl, probably 4-5 years old, started playing tambourine at about 10, and learned to play the vibraphone just a few years ago. I started my first band, glowfriends, with my brother Mark, when I was 16 in 1996.

Q: Who are your influences?
Too many too list! I was brought up listening to my Dad’s amazing record collection and then later found so many great bands and artists while working at various record stores in my hometown. To name a few bands that come to mind: Slowdive, Ride, MBV, The Go-Betweens, Galaxie 500, Adorable, Echo and The Bunnymen, New Order, The Pastels....I could list hundreds of bands. I’ve always been a big fan of Creation Records/Sarah Records, C86 and twee stuff, a lot of psych stuff from the 60’s, 60’s folk and I’m a big fan of a lot of 80’s underground and college rock, post punk stuff, too. Tons of great indie bands from the 90’s as well...I feel that everything you’ve paid tribute to so far with TBTCI so far is right in my wheelhouse of favorite bands of all time!

Q. Make a list of 5 albums of all time…
This is impossible for me. Here are the first 5 that come to mind...
Slowdive “Souvlaki”
The Stone Roses “s/t”
Ride “Nowhere”
My Bloody Valentine “Ecstasy and Wine”
The Cure “Disintegration”

Q. How do you feel playing live?
Playing live is my ultimate comfort zone, it’s a very freeing space for me, and cathartic, definitely. I love the feeling of disappearing from myself into a song, and particularly to feel that with the audience at the same time is a great joy, for sure.

Q. Talk about Tambourina and Vida Eterna, What are the main differences between the two bands?
So, Vida Eterna is a side project with my husband Adam, who is the drummer in Tambourina, and was also previously playing guitar in glowfriends. He and I write the songs together and we sing together in this band, it is mostly acoustic, kind of like a Damon & Naomi type of thing, although recently we have started experimenting with synthesizers and beats...it will be interesting to see how the final versions of the songs take shape for the debut album. We’ve been performing acoustic and sometimes with a bassist and drummer in our hometown, playing shows here and there. We loved recording 14 Iced Bear’s “Cut” for the TBTCI’s Sarah Records tribute, and “Quiet Heart” for The Go-Betweens Tribute.


Tambourina is the culmination of ex-glowfriends members, Mark Andrew Morris on guitar/vocals and Holly Klutts-Morris on bass (from Overly Polite Tornadoes) and Adam Zimont on drums/vocals and me (vocals/tambourine/vibraphone) (from Vida Eterna)

After glowfriends essentially dissolved, my brother Mark and his wife formed their own side project, OPT, and Adam and I started Vida Eterna, it just seemed like the next natural step, writing new material with our spouses, since life was changing again, children being born into our little families made it harder to devote significant amounts of time to practice all together.

A bit of time went by and we got together again work on songs as a four piece, and for the first time there wasn’t old glowfriends songs hanging in the background that we had to work on. It felt like a clean slate, and with much time we had invested in our side projects, once we returned to play together again, (this time with Adam on drums, and me on vibes, which was new) our sound had changed and developed, it just felt like a departure from glowfriends, and in need of a new name. Tambourina just made sense, it popped into my mind out of nowhere and I had no idea it wasn’t a word I made up! It is actually a French word meaning, “To drum” which is appropriate, since the drums and percussion are setting this new music apart from what we’ve done before. We do feel we are starting all over again, doing something completely fresh and exciting for us—we cannot wait to record these songs for the debut album! Recording “Sunshine Smile” was SUCH an inspiration for us, we had the idea to cover the song for our album before we heard about this tribute, and the fact that we were gifted the opportunity to record it for the comp, we feel it was meant to be. We are huge fans of Adorable, since the 90’s, and it is just an absolute honor to be a part of this.

Q: Tell us about the process of recording the songs ?
Well, with glowfriends we worked with a producer friend of ours, Charlie Piper, out of Chicago, IL, on “A Farewell to Fair-weather,” “To Have and To Hold,” “All Things Made New” and our last album, “Gather Us Together.” On the last one, half of it was recorded by him at a studio in Chicago, and half by Kevin Dixon of Brief Candles at his studio in Milwaukee, WI.

For the Tambourina debut album, my brother Mark, our guitarist, will be recording us at his home studio, and I’m very excited about this because we’ll be able to work at our own pace and not have to worry about packing in and paying for studio time, etc. I don’t normally love recording, but I’m actually really looking forward to recording these songs with Mark since we had a ton of fun recording the song for the Adorable tribute! Definitely feeling encouraged about jumping right into making this album, keeping a sense of playfulness throughout. Something definitely feels really right this time around, and all 4 of us are all in and psyched about making this record!

Q. You are the creator of Kalamashoegazer, perhaps the oldest festival dedicated to shoegaze, in activity, how did it all begin? Tell us the history of the Festival
Well, my brother Mark and I, since the 90’s just scoured every independent music magazine for any and all obscure shoegaze/dreampop bands we could find. I remember when the internet was young, I looked for chat groups related to shoegaze in the hopes of meeting other fans of the genre. A turning point for me was when we were out playing shows in Los Angeles, and we found in a local paper that The Autumns we’re playing a show at The Troubadour. We went to see them, and after the show, someone outside the club passed me a flyer for an event, there were shoegaze bands listed on all sides of the flyer, I was intrigued. So we ended up going to a few of these events, they had them once a year in July, and it happened each time to coincide with when we were playing on the West Coast. The events consisted of a DJ spinning shoegaze/dreampop, and a couple of bands playing. What I loved most was the community aspect of it—getting bands and fans together, that seemed magical to me. When we started in 2007, we had 6 bands booked for the fest, it was a bit of an experiment, shoegaze was not known like it is now, and we didn’t know we’d still be doing this, but here we are! It’s grown slow and steady over the years, at a pace I feel like has been manageable, and for that I am grateful!

Q. What is the concept behind the Kalamashoegazer Festival?
It’s an all day shoegaze and dreampop fest in Kalamazoo, Michigan, we have DJs spinning shoegaze throughout the fest, which typically consists of 7-8 bands, and runs from 4 pm to midnight, 1 am. The main concept is really just getting like minded people together who love a lot of the same music, getting fans and bands to meet each other. There is an energy about it, and some very original dancing you won’t see anywhere else! I’m serious. We’ll have to come up with a name for it.

Q. How was the process of curation and selection of bands?
I get submissions from bands that want to play throughout the year, and I typically select at least 1-2 bands that way per year, the other groups I choose based on just personal preference, perhaps we played with a particular band and loved them, or a friend’s band recommended them. Jen Dixon from Brief Candles has great input, and her and I tend to like a lot of the same stuff. It’s always nice to have an up-and-coming younger band on the bill, along with one band that has a cult following and has recently re-formed, maybe hasn’t played a show in a very long time. That is always a very exciting thing to have happen at the fest.

Q. What are the most memorable shows in your opinion?
Last year Kalamashoegazer 11 at Bell’s Brewery was really, I think, the best one yet. Whimsical re-formed and played their first show in many years and that was really special for a lot of people. DKFM shoegaze radio out of Los Angeles were there for the first time and they were a huge support of the fest. There are memorable mo

Q. What is your opinion on the effervescent new scene of bands
(shoegaze / psych / post punk) around the world? I think there’s so much out there that it’s pretty overwhelming, but I’ve definitely heard some really great bands in the last few years. It’s encouraging when I hear stuff I’m really excited about. I really enjoy the show “When The Sun Hits” on DKFM. Amber plays a lot of bands I like.


Q. Which new bands do you recommend?
I have to recommend all of the bands that are playing Kalamashoegazer 12 this year! Not all are “new” per say, but definitely worth a listen! Ringo Deathstarr from Austin, TX, the legendary Springhouse (Jack Rabid from The Big Take-Over magazine, re-formed, first show in 8 years) Soft Science from Sacramento, CA (I know they did a great cover of “I Don’t Know Why I Love You” on your House of Love tribute) Tambourina (my band, from Kalamazoo, MI, Brief Candles from Milwaukee, WI, Seashine from St. Louis Missouri, Tears Run Rings from Portland, OR (First show in 13 years!) and Airiel from Chicago, IL. It’s going to be a blast!

Q. What are your plans for the future?
Keep on putting on this fest as long as we are able to, make more records and hopefully tour again.

Q. Final Thoughts....
You’re wonderful, Renato. Thank you for all you do for this community. We value it so much!
*
*
*
Thanks