She Never with Toy Tambourine - An Interview 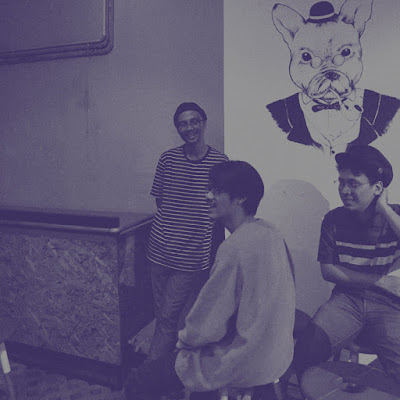 Q. When did Toy Tambourine begin? Tell us about the history...
A: Toy Tambourine began in the midst of 2016. I always wanted to make a pop band but it's hard to find someone from my peer whose also a popkids. I made another band called Soft Blood before Toy Tambourine (and still running) and it was too modern in terms of music and songwriting though it still have lots of pop sensibilities. So i made Toy Tambourine for the sake of my everlasting love for classic and pure pop hahaha.

Q: Who are your influences?
A: The almighty Harvey Williams and his Another Sunny Day moniker! Also 14 Iced Bears, Sharesprings, The Pastels, The Field Mice, The Dentists, McCarthy, The Clientele, Blossom Diary and there are still a lot but I think you can guess the rest.

Q. How do you feel playing live?
A: It's fun, of course. But I always got nervous everytime I stood on stage. So i think i have a love/hate relationship with playing live.


Q. How do you describe Toy Tambourine´s sounds?
I think it's like a mix of Ramones' power chords and noisy guitars with the slacky and poppy 14 Iced Bears early sound. Oh and Kip Berman's style of songwriting kinda shape Toy Tambourine sound too.

Q: Tell us about the process of recording the songs ?
It was always me in my bedroom recording all parts of the songs. Sometimes i get help from my friends because I have no bass guitar. I mixed and mastered the songs all by myself.

Q. Which new bands do you recommend?
A: I think it's not actually new but I'm gonna recommend some cool bands from Indonesia. Sharesprings always be my favourite since 10 years ago. Blossom Diary were such an influental bands for lot of us. Grrrl Gang are also great, those pop brats really know how to craft a good songs. The Sensitive are also good with their sarcastic lyricism. Ocean Chimes is amazingly great to bring back The Ocean Blue-esque sound. The Whistling Possum also great, I think there are not a lot of bands that make Orange Juice as their main influence.

Q: Which band would you love to made a cover version of?
A: I did release a three cover songs of Another Sunny Day. But if i have to choose again, I think i want to cover Weezer. Or The Rentals.

Q: What are your plans for the future?
A: Recording another EP or maybe an LP. Do more show and then I don't know, I planned to put Toy Tambourine on hiatus or maybe called it quits.