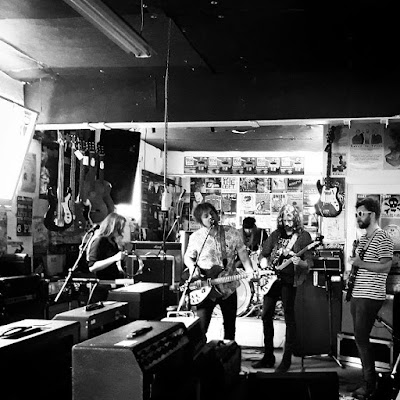 
Q. When did Sacred Shrines begin? Tell us about the history...
We played our first show as Sacred Shrines in March 2014 in Brisbane, Australia. I had worked previously with Mat Von Diehm (drums) on other projects and we went about looking for the right people to start the band. We knew exactly what we were looking for and were lucky enough to find the right people for what we were hoping to achieve with our music. We’d been writing and rehearsing a little before our first show once we cemented the lineup and pretty much started recording our first album right away.

Q: Who are your influences?
Our music is a mix of a lot of things and we all have our own individual influences that we bring to the band, but we all do share a love of 60’s music and I would have to say the sounds of that era are probably our biggest influence, especially the late 60’s. Some psych/garage bands that we really like - The 13th Floor Elevators, The Easybeats, The Kinks, The Rolling Stones, The Soundtrack Of Our Lives, Broadcast, The Black Angels, The Sonics, The Brian Jonestown Massacre, The Doors but the list goes on endlessly!

Q. Make a list of 5 albums of all time…
I’m just gonna name 5 off the top of my head that I really like. This is the impossible question!!!

Q. How do you feel playing live?
Playing live is probably one of our favourite things about being in a band. Most of the things we do are in anticipation of performing e.g. writing, rehearsing recording. It’s hard to describe but I guess it is mostly like a blur. In some ways time goes very fast and stands still as well. It’s a great feeling playing our songs together. We’re best friends, so that makes it even more amazing to be able to perform together.


Q. How do you describe Sacred Shrines´ sounds?
We describe our sound as psych/garage but there are a lot of other influences that find their way into our songs. We’re pretty focused on trying not to repeat ourselves and work at making our songs quite different to each other within the framework of our sound. We seem to be moving in a few different directions with our 2nd album, so I’m excited about that.

Q: Tell us about the process of recording the songs ?
We try to do quite a lot of pre-production before we head into the studio. Our guitarist Matt Weatherall is also a recording engineer, so we put time into making demos of the songs ourselves and then make changes until we think we’re ready to head into the studio. We’ve been recording with a few different people since we started so that we can create a diverse sound on our records. We’ve also been getting multiple people from around the world to mix our songs so that they will have a sense of individuality. Usually we set up and record together as much as possible to retain the feel of the band when we perform live. It’s usually all done fairly quickly as well.

Q. Which new bands do you recommend?
There’s some great Australian psych/garage and other genre bands that we are proud to call friends - Sons Of Zoku, The Dunes, The Black Heart Death Cult, The Flamingo Jones, Drawn From Bees, Mexico City, We All Want To, The Stress Of Leisure, Suicide Swans, Sounds Like Sunset and I could go on and on. That’s a good start!

Q: Which band would you love to made a cover version of?
The Stooges. We’ve played “I Wanna Be Your Dog” at the end of our set a couple of times.

Q: What are your plans for the future?
We’re currently recording songs for our second album which is coming out in 2019. We’re hoping to be finished by the end of the year and we’re super proud of what we’ve done so far. We’re also hoping to play shows in North America and Europe as well next year. Basically more recording and playing in as many places as we can get to.

Q: Any parting words?
We’d like to thank everyone for their support so far, from buying our music to coming out to see us play live and writing to us as well. Keep on supporting live music! Cheers, Phil
*
*