Port with Jemez - An Interview 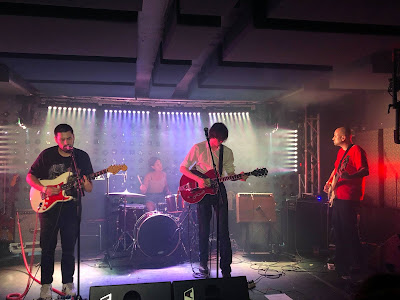 
Q. When did Jemez begin? Tell us about the history...
Ethan and I met on a Tinder date. Neither of us really felt a “vibe” romantically, but it turned out we shared a lot of common musical interests and had a lot of musical chemistry. The rest is history! Arielle and Dan used to date in college.

Q: Who are your influences?
The idea Ethan and I had starting out was to make a band that sounded “not indie rock,” with Unwound and the Swirlies being the main points of reference. I also remember Ethan playing the band Medicine at his crib when were first starting out and saying we should sound like them. We’re definitely indie rock and sound nothing like Unwound, so I don’t know what happened there. I think Sonic Youth and Yo La Tengo are other bands we at least semi-consciously try to emulate.

As far as the other members of the band go — Arielle has no joke been listening to the song “Scat Man” a lot recently, but thankfully it doesn’t seem to be affecting the way she plays drums (yet). I think she sounds kind of like Georgia Hubley, but that’s probably a lazy comparison because they’re both female drummers. Dan is way fucking older than the rest of us and has a lot of hilariously dated references, like Faith No More and Graham Parker and shit, but I think that’s part of why his baselines are so unique sounding. He also used to rap in the 90s which he claims gives him a good sense of time, but I definitely don’t hear that.

I’d like to think my guitar playing sounds like a cross between Neil Young and Kevin Shields, but if I’m honest I definitely sound like The Edge more than I’d like to admit. I don’t think either Ethan or I are in danger of sounding like Bono though.

Q. How do you feel playing live?
"There is no greater bliss than dancing and performing.”

Q: Tell us about the process of recording the songs ?
The EP was recorded in our practice space on a Tascam 688, which is basically the pinnacle of cassette home-recording technology before everything starting going digital. It has 8 tracks and the fidelity is kind of nuts considering that they’re all squeezed into the width of a cassette tape. The more recent stuff was recorded digitally, but I think we’re going back to the 688 for the next one.

Q. Which new bands do you recommend?
Us, honestly.

Q: Which band would you love to made a cover version of?
I have a lot of ideas for covers that the rest of the band doesn’t really seem to be into. We did a version of “Twist and Shout” in the beginning that was modeled after the Mama’s and the Papa’s, but we kind of phased that out of the set and the rest of the band just sort of laughs nervously when I suggest bringing it back. Other than that… “The Calvary Cross” by Richard and Linda Thompson, “Laid” by James, “Love Me Harder” by Ariana Grande… the list goes on.

Q: What are your plans for the future?
What future?