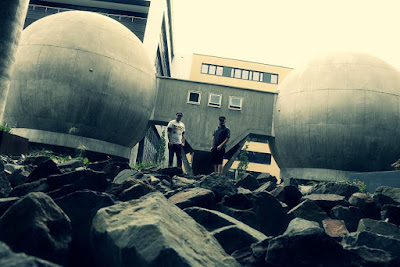 
Bemushroomed is the second EP of PIPE'S NOT DEAD. Released in October 2018, this work features 6 tracks with a common theme: the expansion of the mind through psychedelic drugs or natural substances. During this musical trip we can hear the voices of three of the most important figures of the psychedelic world: Timothy Leary, Terence McKenna and Alan Watts.

1) Turn On, Tune In, Drop Out
Pipe's not dead: We composed this song even before thinking about the concept of the EP...Actually, the track was supposed to be the soundtrack of a feature film. It wasn't used in the end and we let it sit for a while. Then, in the last year, we found a couple of very good documentaries on the so called psychedelic generation and they kind of planted a seed in our mind. The voice of Timothy Leary, here in one of his most known speech, was added after composing the music and it was the perfect match with the atmosphere of the song. There is something that reminds us of the Pink Floyd soundtrack for the movie More on it. We thought that it was the perfect song to introduce the listeners to what turned out to be a pretty coherent musical trip. Maybe the listeners of TBTCI remember a previous version of this song appeared in the Planets Collection-Jupiter.

2) Aurora 3
Quite a different genesis for this song compared with our usual way of composing. It started with a very simple and minimalist organ melody. We don't use organ very often, but this time we found it very interesting. There is some influence of Turkish psychedelic music, in the guitar riff with wah wah pedal and the use of Turkish darbuka percussion.The second part of the song has a piano melody and the ending has a clean guitar riff on the organ. We love this kind of mirror structured songs. The name Aurora was given since the beginning and we added the number 3 after because we had three reasons to name the song Aurora. One may be quite obvious...imagine the musical trip under the cold lights of Aurora Borealis. Another is that the Roman mythology speaks of Aurora, the personification of the dawn. The third one is that the middle name of the Massimiliano's better half and Jack-of-all-trades when it comes to helping us out, is also Aurora. It's light that is the silver lining between the name.

3) Total Eclipse of the Mind
In the very beginning, this song was a coda of Aurora 3. Then we developed it as soundtrack with almost only electronic sounds. When the moment came to select the tracks for the EP, we decided to include it and we thought that it may be a good idea to add some more guitars and a simple bass riff to complete the electronic one. We finished the song the day of the last total lunar eclipse of July 2018 and so we found the title. But it was interesting to see the parallel between the total eclipse of the moon and those moments of extreme tiredness and stress when you're on the verge of a mental breakdown. This is maybe the song that in terms of sound is the perfect transition between the previous EP "We are no longer young but we are not dead yet" and the new sound of this EP.

4) The Mushroom
Exploring the incredible rich contribution of Terence McKenna to several topics related with the expansion of the mind made us decide to include his voice in this song. The song has a quiet and chill harmony that makes us dream with open eyes. Initially we made a version with no drums, but we thought that adding some very light ones and a tambourine might give it more dynamic. We don't know if the mushroom can give you the answer you look for, but we like to imagine that this song can help you to dig more inside yourself. Lately, we've had a lot of inside jokes on mushrooms. Of course, we are experimenting with mushrooms - champignons, portobello, yellow chanterelle and so many other delicious additions to our dinners. But it seems we've been experimenting so much that they ended up on the sleeve of our EP.

5) KyKeoN
Kykeon is a Greek word, is the name of a drink that is believed to be a psychoactive compounded brew normally associated to the Eleusinian Mysteries, the most famous of the secret religious rites of ancient Greece. They were sort of initiations held every year for the cult of Demeter and Persephone based at Eleusis. We've always been passionate about Ancient Greece and the Roman Empire, their culture and tradition. It is where we come from, no doubt. Recently, we spent some time in Greece and found an exciting musical scene that's as inspirational as one would expect - bundles of inspiration for us. Musically speaking, we tried to recreate different moments of the Eleusinian mysteries, more specifically the moment when Kykeon is served. So the song tries to captures the changes of mood and emotional state associated with this part of the rite.


6) On the road paranoia
The words of Alan Watts accompany this song with a very long intro. It has been composed with this shape from the very beginning. Literally on the road. Spending a lot of time travelling, we experienced sometimes this strange feeling that we called "on the road paranoia". It's a mix of tiredness and excitation to discover something new, fear, and at the same time, fascination of the unknown and of being lost in translation or not be understood. Musically very adequate as the conclusion of this EP, it mirrors the two souls and minds of Pipe's Not Dead!. We suggest this fine piece to accompany another refined work of art, Hunter S. Thompson's "Fear and Loathing in Las Vegas".
*
*
*
Thanks