Phantasms with The Strange Creatures - An Interview 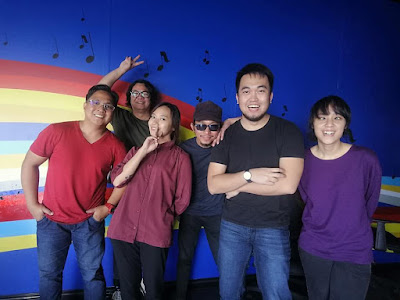 
Q. When did The Strange Creatures begin? Tell us about the history...
A: The band was formed January 2013. My original plan was to form a boy-girl duo like The Ghost Of A Saber Tooth Tiger. We ended up as a full band because of musician friends volunteering to join me in this journey.

Q: Who are your influences?
Each member have different influences, but I think we’re all fans of The Beatles, so that’s something we all have in common. But before we started jamming, i had my bandmates listen to Camera Obscura, Belle & Sebastian, The Charade, Slowdive, The Radio Dept. and The Pains Of Being Pure At Heart.

Q. Make a list of 5 albuns of all time…
Slowdive - Souvlaki
The Radio Dept - Lesser Matters
Blueboy - If Wishes Were Horses
The Cure - Disintegration
The Beatles - Magical Mystery Tour

Q. How do you feel playing live?
We still feel nervous before we play. But once we started, it’s like we’re transported to another dimension. The natural high you get when playing music is just amazing.

Q. How do you describe The Strange Creatures´ sounds?
It’s a blend of twee, dream pop, the jangle of indie pop and shining synth of 80’s new wave music, riddled with boy-girl vocals.

Q: Tell us about the process of recording the songs ?
An acoustic demo was sent to each members so they can learn the song. Then we arrange it for several hours in the studio and play it on gigs so we can have our friends listen to it and ask for comments/suggestions. Once the song riped, we begin recording it.

Q. Which new bands do you recommend?
We’d like to recommend our fellow bands from the Philippines like We Are Imaginary, The Geeks, July XIV, Identikit, Populardays, Narcloudia, The Rave Tapes and Pastilan Dong!

Q: Which band would you love to made a cover version of?
Any songs by The Beatles, The Cure, Belle & Sebastian, The Smiths, Camera Obscura and Blueboy will do.

Q: What are your plans for the future?
We’re planning to release several music videos from our album, Phantasms.

It’s also a goal of ours to play outside the Philippines. Now that we have an album, we hope this will materialize. Any music festival from Southeast Asia will be a good start.

And more Singles, Albums in the future.

Q: Any parting words?
Our album, Phantasms is available on Terno Recordings and Boring Productions.

For the limited edition 12” + 7” Vinyl, you can purchased through the bandcamp link below:
https://boringproductions.bandcamp.com/album/phantasms

Thank you, Renato & The Blog That Celebrates Itself. Cheers!
*
*
*
Thanks