Sensitive & Tired with Hug - An Interview 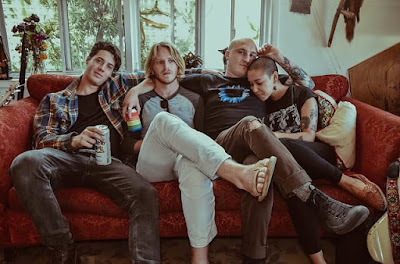 
Q. When did Hug begin? Tell us about the history...
The beginning of hug is a bit complicated, but hug began with childhood friend Wyatt, in my moms garage in 2016 as a fun goth project. I (Chris) was playing bass and Wyatt played guitar and synth. Wyatt later didn’t want to play guitar anymore as he preferred synth. I ended up picking up guitar for my first writing endeavor. I naturally started writing more shoegaze-like riffs and that’s how our sound eventually came to be.

We landed a bassist and drummer and played a couple local bar shows. Our drummer ended up leaving as he had other bands and it wasn’t quite his style. Our bassist joined another band and that sort of drifted away as well.

We ended up gathering our bassist, Tron, who happens to be my girlfriend and it was a perfect fit. We went into recording with our friend Will, who ended up wanting to drum for us. And that puts us here.

Q: Who are your influences?
As for our influences each member has very different taste in music. It ranges from every end of the spectrum. Wyatt is a big Enya guy which influences his keyboard and synth sounds.

Drummer Will has a background in hardcore hence his heavy hitting drums.

As for me I’m heavily influenced my 90s shoegaze, grunge, and alt rock. I love the sounds of My Bloody Valentine, Slowdive, Swervedriver, Hum and everything in between. It helps influence creativity and putting together huge, room filling chords and riffs. I like to call it a fuzz filled, reverb coated “hug”!

Q. Make a list of 5 albuns of all time…
Top five albums?
In no particular order
Obviously Loveless by My Bloody Valentine.

They might all be obvious but the rest are Souvlaki by Slowdive, Mezcal Head by Swervedriver, You’d Prefer An Astronaut by Hum, and maybe Ferment by Catherine Wheel.

I could go on and on about great albums and there’s so many more that go all the way back to the 80s and flash forward to present day.

Q. How do you feel playing live?
Playing live is a major release and very much so cathartic. There is so much anxiety building up to it. I have a hard time sitting still the day of the show. Once you’re up there it’s go time and almost an out of body experience. I tend to end up having a lot of energy and blacking out during the middle of a set only to end up in a total state of peace during our last song of the set. It’s an amazing way of displaying how much hard work and the countless hours we all put in to making the EP.


Q. How do you describe Hug´s sounds?
As for describing our sounds I’m going to go back to what I said previously, it’s a fuzz filled, reverb coated “hug”. Very atmospheric and ethereal. We play very loud and I like to think Wyatt adds the perfect touch of atmospheric synth sounds to hone in all of our noise.

Q: Tell us about the process of recording the songs ?
The recording process was tedious as hell. I’m a perfectionist and OCD and anxious and depressed so it became a beautiful nightmare. We spent over a year writing and recording and scrapping songs and riffs and lyrics and melodies. We probably wrote around 15 songs and ended up with 5. I’m constantly writing new and better material as I’m still growing as a guitarist and song writer. That being said I’d come in with new songs every week and say to hell with the old stuff. We also took on Tron, our current bassist and vocalist, midway through recording the EP so that was an adjustment, but a very easy one at that.

We took a lot of time to dial in different tones and recorded many dry tracks and re amped them over and over. I’m also not the best singer but luckily Tron has range for days which helped me sit in a comfortable spot vocally speaking. Once again it was a nightmare, but a beautiful one.

Q. Which new bands do you recommend?
New bands to recommend? You’re either asking the right questions or the wrong questions, depending on how long you want these responses. I can go on for days and we have so many good friends in good bands. To start, a childhood friend of ours, Jacob Breeze, is in an amazing band that’s taking off called Spiritual Cramp, they’re all amazing dudes and we love them and their music. He’s also in a sweet band called World Smasher and does solo work as Fine. All amazing. Then we have local friends in Downers, Little Heroine, Babe Parade, and Witness 9. All great people, all sweet sounds. We’re also loving the sounds of Tijuana based bands Memory Leak and Mint Field. There’s plans to play a show with Memory Leak in the future so we will see if that goes through! To list of a few more there is Miserable, King Woman, Newmoon, Rain, Ringo Deathstarr and so many more. Last and not least, Tron has her own band called Bruised Fruit and just released her first EP. And then our drummer, Will, and good friend Presley play in a band called Grenelaine which is a rocking good time.

Q: Which band would you love to made a cover version of?
Personally I really want to make a very atmospheric cover of Q Lazzarus’s “Goodbye Horses”. That’s all that’s been on my mind lately. Other than that I would love to find songs in adjacent genres to ours and turn them into something different and more “hug” sounding. That’s the whole fun of doing covers!

Q: What are your plans for the future?
As for future plans, we are really trying to bring classic shoegaze music back and turn it into a new movement in the local San Diego scene. There’s a lot of potential and some really good gaze bands starting up. We got a couple amazing shows lined up and even a shoegaze festival that we’re going to play here in San Diego. I’d like to link up with some of those bands and do a short California coast tour and see where that takes us. Like I said earlier, I’m constantly writing and have quite a few songs lined up for the next release so we will see if those see the light of day or if I’ll scrap them like I tend to do.

Q: Any parting words?
Thank you for your interest and the opportunity to be interviewed. I can’t speak for the other members of the band but I can speak highly of them. I love them all, we love each other, and it’s so great to be part of a team together. They drive me nuts sometimes, but that’s just what I need and I love them for that. They know exactly what I’m talking about. I can’t thank them enough for their love and support and hard work.

Much love from Chris and the family we call hug
*
*
*
Thanks