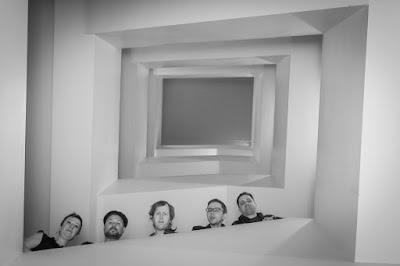 Wide AwakeRyan: This is a call back to our first song from our last record which was called Fast Asleep. It was inspired by the self-immolation that started the Arab Spring and all the uprisings that have been happening around the world. One could assume that makes it dark, and of course there is some darkness there, but overall it's a song of hope. It's big and powerful and we felt like would make a great opener.

Red TornadoEmily: This was an experiment for me to do some kind of stream of consciousness lyric writing. We had this percussive melody already, and that really lent itself to lots of words packed in and lots of consonant sounds. So I went with it. In the end, it's a somewhat surrealist song with tons of nonsensical lyrics that create images of puppets, wrinkly beds, and mechanical creatures that fit well with the energy of the tune.

Eric: We had this song kicking around for years, but it never really clicked until Russ added his awesome bass groove. The chord progression in the chorus is inspired by Lush, but with an interesting bass run underneath that makes it it's own unique thing.

SmotherEmily: Ryan started the concept for this one with the lyrics to the chorus, which were all about a kind of overwhelming, visceral love. I interpreted it partially as someone who is deeply in love, but they are trying to get so much from another person that they smother them in the end. So the verse lyrics played on this concept and tried to create images of really intense physical and emotional experiences that verge on crossing a line into unsafe or unhealthy.

Eric: This is another one that has been around forever. There's an alternate version of Smother floating around that's a couple years old at this point, with programmed drums, synth bass and a completely different guitar part. Totally different and cool in its own way. We deconstructed that when we changed direction and added a live rhythm section, and it turned into something really powerful.

Mayday
Ryan: A mayday is a cry for help and in this song I am struggling with the reality that people aren't allowed to choose when they die. We will put an animal down to end its suffering, but we make humans suffer until they die. In reality we are all dying all the time. I look at how we are all made of carbon atoms that originally made up a dying star and talk about how I choose to forgive people for dying before their time.

Emily: This is my favorite song on the record, partly because the lyrics are so dark but it's also one of our more dance-able songs, and Ryan and I get to do this super playful back-and-forth with our vocals. I've always loved that type of musical contrast.

Revolt Ryan: Revolt has a kraut rock feel in the intro and verse with a big chorus and an epic, wall of sound, sonic guitar adventure in the middle. They lyrics are a story about hijinx and escape; a love story that culminates in an inevitable Bonnie and Clyde ending but with final transformation through death into a dragonfly.

Eric: This is one of my favorites. It takes a very long time to get to the chorus, where the tension that's been building is finally released, and then the bridge takes it even higher. This was also one of my favorites to record. There are a couple tracks buried quietly in the mix at the start. Ryan added a rhythmic piano part, I added a fuzzed-out keyboard drone with an old Casio run through my guitar rig, and Scott played a pattern using some old pieces of scrap wood that were laying around our studio. You can barely hear these parts, and they stop when the verse starts. Almost like a refrigerator hum that you don't notice until it's gone.

Falling ApartRyan: Lyrically this is a pretty literal song about my stepdad's heart problems and how he was able to come back from death's door and remake his life into a picture of health. It juxtaposes the concept of modern open-heart surgery, where they literally take out your heart and use a machine to keep you alive, with the Bible story of Lazarus who was raised from the dead.

Waiting ForRyan: This song is a reflection on modern day society and how most people want to get things now with as little work as possible, while all the while hoping things will be better in the future. I say, don't wait for the future, enjoy the now, let things go, and stay in the moment.

Eric: Really beautiful and simple song. We tried to make this really sparse in parts, so that the wall of vocal harmonies that come in late feel huge and dynamic. We were probably inspired by the xx to try to do something with so much room to breathe, even though it sounds nothing like the xx.

Writing On The WallRyan: This song is a tongue in cheek call-out to machismo. Its all about being tough enough, loud enough, and fighting your way to the top.

Eric: I'm hoping that musicians can appreciate all the odd time signature changes in this one, and that non-musicians can still tap their toes.

Sour Orange, Sweet LimesRyan: In this song, I'm reminiscing about waking up in the cool cloud forests of Nicaragua, seeing Toucan's, smelling the morning dew, hearing nothing but the wind. A place that's close to my heart called Mil Bosque, that I can't be at very often, but if I close my eyes I'm already there.

Emily: This started out as two distinct songs and we blended them together with Russ' lovely bass breakdown and turned the second song into basically a three-minute energetic build. It's super fun live.

Eric: This one didn't end up at all how I'd envisioned it, but I love it. I was trying to write a memorable guitar riff like She Sells Sanctuary from The Cult, and we had built a song around that riff, but then we stripped that out and simplified the guitar part to give it some space. My original riff pops up on guitar and bass in the big breakdown in the second half. I love that the opening guitar line gets referenced at the very end. And it closes out the record on a positive and hopeful note.
*
*
*
Thanks