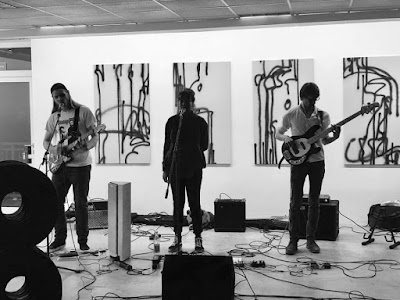 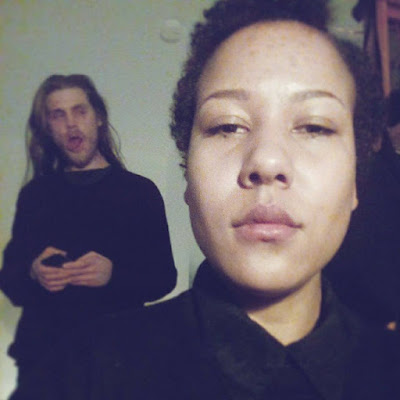 Q. When did Master Of All Four Elements begin? Tell us about the history...
Eric: I had been playing bass for a couple of years in a few bands that all tended to have a more aggressive sound. In between I wrote and recorded some songs on my own that did not fit the sound of any of those bands (Most of them ended up on the first two MOA4E albums) . So I basically sat on these songs for a few years until I met Leah and we became a couple. I noticed that she could sing really well so I showed her my demos and asked if she wanted to form a band and she said yes! We had recently moved to a bigger place and I'd gotten some new recording equipment so we quickly recorded an hour's worth of material. We were surprised when all our musician friends really liked what we did because it was so different to what they were playing. Then we were asked to perform live so we recruited my old friend Pascal to play bass and guitar and help produce new music. He dropped out recently to pursue other interests.

Leah: I guess it started just a few months after Eric and I met. We actually wanted to something really stupid and funny that had nothing to do with a real band. The idea at first was just us recording some weird chants and stuff like that but then we started writing actual songs. Then we needed a band name and at that time we were watching Avatar - The last Airbender. We just went through the whole opening monologue looking for a name still thinking we would do it just as a joke. Well but here we are now, still Master of all four Elements but with real songs. Who could've known

Q: Who are your influences?
Eric: It's hard to say really, when I started playing bass I listened to lots of 70s and 80s Jazzfunk and Fusion and when I was a Teen I listened to everything from Britpop to Thrash Metal. I guess purely from a songwriting perspective I'm most influenced by classic Pop like the Beatles. But I also love the weird and kinda trashy aesthetics of bands like DEVO, B52s or the Pixies and the randomness of for example Yellow Magic Orchestra. You know, one album might be great pop music and another one is just strange sound experiments. As a Teen I loved Blur and Gorillaz because every album would be so different from the last one and you didn't know what to expect. Also, videogame music has had a huge influence on me especially the late 80s/ early 90s SNES/Genesis era. I basically first started writing music to produce soundtracks for my own little games I made on my PC.

Leah: My influences are just everyone around me I think. When I write songs it all depends on what I'm feeling in that moment and what was keeping me up at night. For like other musicians I'd say Solange, Hindi Zahra, Tyler the Creator and so on. There are so many great artists and they all influence the songs that I write.

Leah: System of a Down - Mesmerize, Amy Winehouse - Frank, Death Grips - Exmilitary , Crustation - Bloom, Solange - A Seat at the Table

Q. How do you feel playing live?
Eric: It's the best feeling ever. The songs really only come alive on stage. Right now Synths and Drums still come from a Laptop but we want to extend to a full band sometime soon. We already have a drummer and a keyboard player but no money to afford a place to practice. But yeah lots of people have come up to us and told us they like the live versions of our songs even better than the recorded versions!

Leah: I still have get used to it. I'm not really outgoing and took me a while to even sing in front of friends or family. I'm always super nervous before shows and I can't really say if I like it or not. It's cool to see that people actually come to see you perform.


Q. How do you describe Master Of All Four Elements´ sounds?
Eric: It's a mixture of the artificial and the organic I guess. Then whole 80s angle is kinda weird because production tended to be pretty bombastic in pop music back then (it still is of course) and that sound clashes with our overall lofi approach I think. I don't want that 80s thing to be that pronounced anyway, I just love wobbly keyboard and chorus-y bass and guitars and lots of melodies that can get stuck in your head. A few of our Songs are just straightup dream- and electropop but other's cannot be easily categorized like 'Mountain' from Free Bs for example. I wrote 'Secret Place' from 'Blue Water' as a homage to Djavan but other than that I don't really think about other music when I'm creating my own. I really don't know how to describe our sound but one concert promoter called it 'Weird Wave' and I quite like that !

Leah: Kinda 80ies sound with a whole bunch of synthesizers and lots of reverb.

Q: Tell us about the process of recording the songs ?
Eric: I write most of the songs and the lyrics while playing the guitar. Sometimes Leah plays bass when I'm trying to come up with something and sings along. Once we got something I start by making MIDI Drums and Synths and then we record Guitar, Bass and Vocals. For the next release I'd like to record in a proper studio with a full band!

Leah: Eric is the guy to make most of the backing tracks because I have no idea how to do anything with a computer. Some songs that I wrote were just recorded on my mobile phone and then I sent them to Eric. But for the most part we just sit in our little bedroom studio and see what we come up with and then record it.

Q: What are your plans for the future?
Eric: Put out more albums, get better. Play a show every week. Shoot a video. Record with a full band.

Q: Any parting words?
Eric: Thanks for having us, support your local scene !

Leah: Thanks for the interview, not as easy as I thought :D
*
*
*
Thanks