Existential Anxiety with Reveries - An Interview 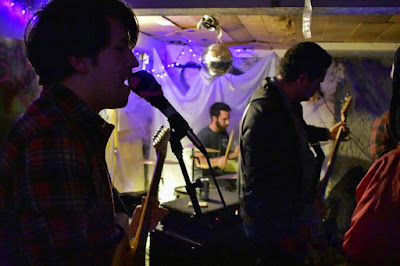 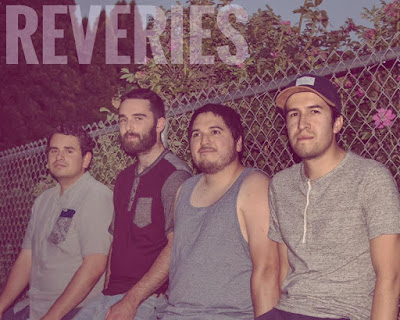 Q. When did Reveries begin? Tell us about the history...
(Jesse Flores) ​Mid to late 2016​, ​Jonathan hit me up to jam and he had a handful of song ideas already recorded on GarageBand so we decided to work on those. The style of these songs were almost NOTHING like the stuff we have out now. Originally the plan was to start an indie band that would be suitable to play local wineries since that’s what is HUGE here in Walla Walla. We jammed once or twice with a drummer which went well but some artistic differences and lack of musical chemistry led to a quick fizzle-out, so Jonathan and I went back to the drawing board and focused more on our writing. As we accumulated more and more effect pedals, a different sound emerged from our songs which consequently began to shape the sound of Reveries. Jonathan took to online searching for a drummer via Craigslist, I believe. Not too long after, we got a response from Ryan of Richland, WA and we set up a time to jam with him in Jonathan’s basement. Being a good fit, and being down for anything Ryan became the next member of the crew regardless of the 1 hour commute to each band practice and local gig. (Thanks, dude!) We needed some low end to our set so we reached out to a long-time buddy/ex-bandmate/Cousin-in-law (is that a thing?) to see if he had the time to commit to a project as he is in Nursing School, had a baby on the way, and also lived an hour away. Despite being as scheduled as he is, Jose agreed to come and learn the songs with Jonathan so we could play a local house show in Walla Walla. Ever since, he’s always carved out the time to make practice and shows and became a staple member of Reveries. (Thanks, dude!) After a handful of house shows and an open mic gig, we set sights on getting our songs recorded and did so beginning late September 2017 which eventually came to fruition just a few short days ago on 4/14/2018. And here we are!

(JF) ​Bands that influence my playstyle for Reveries would probably be: This Will Destroy You, Moving Mountains, Hammock, bands like that. Anything with Post-Rock/Ambient characteristics really. Vocally, I like the styles of Whirr, Citizen, Hundredth, and Nothing.

(RC) BTBAM - Colors. Circa Survive - On Letting Go. Scary Kids Scaring Kids - The City Sleeps in Flames. Fear Before the March of Flames - Any album. The Used - Self-Titled

Q. How do you feel playing live?
(JA) Playing live almost makes me feel like falling in love again. I get stage fright, unsure of what to say, the feeling of uncertainty/anxiety (the good kind?), and at the same time knowing that this is where I want to be.

(JF) ​I love playing live. It gives such a good feeling. Even just practicing, the loud sounds, the rumbling of the bass that you can feel, the hits of drums, together it brings me a certain happiness that only music can provide. It gives me an opportunity to let loose for 20+ minutes or so. Plus hauling our tube amps and Jose’s speaker cab is a good workout so there’s bound to be some physical health benefits to it as well :)

Q. How do you describe Reveries´ sounds?
(JA) I think we’ve set our foundation right between Shoegaze and Post-Hardcore, erected walls of Post-Rock, and insulated thoroughly with the R-value of Dream Pop. Something like that.

(JF) ​I’ve heard the terms “Spacey” and “Dreamy” thrown around at our shows.


Q: Tell us about the process of recording the songs ?
(JA) I contacted Bryan Henry because he had recorded a few bands here in town. He knew what to do and wasn’t afraid to let us know what worked and what didn’t. Our sound wasn’t quite there yet, and our effects didn’t reflect as much in the original mixing. Mind you our style is foreign to most people here in town. We wanted more control over the sound we were trying to achieve. When we got a hold of the files we went with the design-build method on half the songs. “That sounds great, but what if we played it like this…”. It’s not something I recommend unless you’ve got your own recording gear. We re-recorded our guitars, and made the effects really stand out. And for that I would like to thank Jesse for investing his time. He poured hours and hours into this EP.

(JF) ​A lot of writing was done in the recording process. We had a small setlist somewhat formulated at the time of our first show. But our songs have developed into so much more from our first gig to the time the EP was done. The recording process gave us a “canvas” to put our songs on and shape them to our liking. We initially laid down 4 of the songs we had “completed” in Jonathan’s basement with a guy we know, Bryan Henry, who engineered the majority of the demo.

After listening to the tracks, we realized there was more writing needing to be done before we put these tracks out into the world. Bryan hooked us up with the stem files of the recordings we did with him and thus, the rebuilding began.

I, at the time was taking an audio engineering course out at our local community college and was investing in recording equipment of my own so as the writing and re-tracking progressed, I felt motivated to tackle this thing head-on and DIY our EP. Over the last several months, individual members of the band would come over to my place and record their instrument parts in my makeshift home studio set up in my spare bedroom.

We kept the original drums tracks recorded by Bryan and I replaced the snare and kick tracks with Virtual MIDI samples, and did a blend of the original and MIDI on the first track of our EP, “Hits My Eyes.” Vocals were also recorded over a length of time, usually knocking out one song’s worth of parts per session. After Jonathan would lay down the main melody and go home, I would try and come up with and record the harmonies a day or two later.

As for the instrumental tracks on the EP, those were a result of just playing around with looping on my Boss RC-30. After solidifying the parts, I then recorded those as well. I really wanted to incorporate some interludes that served as a segway into another song, as you can find on “Still” foreshadowing the opening riff of “Here With You”, as well as a transition onto the next album with “Passing”.

After tracking, I would send the progress of the mixes via Dropbox to the other dudes until all were happy or until I didn’t get any further input (haha).

Q. Which new bands do you recommend?
(JA) Madeline Kenney: I think she’s the next big thing. Start with her song “Witching Hour”. Cloakroom: they’ve helped me break out of writer’s block. Eliot Sumner: I’m hoping for a new release this year. Information was a great album. Not new, but I think everyone should give Anne a listen. They’re not together anymore. They put out “Dream Punx” while I was living in Portland, Oregon and in a sense they’re the ones responsible for introducing me to Dream Pop and Shoegaze.

(JF)​ I’m usually late to the party with music discovery and find bands after they’ve been out a while. So some bands/artists (not necessarily new/Not necessarily similar to us in any way) that I would recommend giving a listen to, would be: Prawn, NRTHRN, From Indian Lakes, and They Say We’re Sinking.

Q: Which band would you love to make a cover version of?
(JA) Silversun Pickups, Neil Young, and The Cure.

(JF) ​Lazy Eye by Silversun Pickups would be fun to cover.

Q: What are your plans for the future?
(JA) We want to keep releasing new ideas, and sharing them.. We’re talking about doing mini-tours throughout the west side of the USA. Eventually we hope to make it to the East Coast.

Q: Any parting words?
(JA) Respect each other and your planet. It’s our job to keep improving and move forward. Set the example. It’s a start and the easiest contribution. Thanks to Renato for reaching out to us! Thanks for taking the time to listen to our new EP. Take care!

(JF) ​Thank you for interviewing us! Our Self-Titled EP is out now and can be found on iTunes, BandCamp, Spotify, and more to come soon!
*
*
*
Thanks