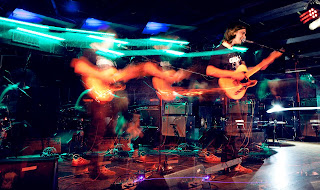 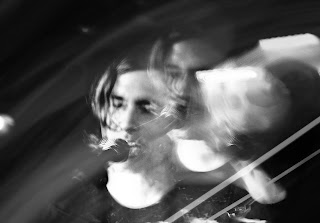 Q. When did Crystal Shipsss start, tell us about the history?
When I first moved to Berlin back in 2010 I read Patti Smith’s novel “Just Kids”. It was very inspiring, and in it she referred to a song by The Doors called “Crystal Ship”. So that was were I got the project name, not knowing that it was a Doors reference (not that it matters!), and that was when CS started. At first the idea was to write, record, and mix one song at a time, and then put it online immediately. I also had this “rule” that I would only sing with a high voice, very different from my “normal” voice, which is kind of deep. After a while doing this I decided to make an album. I therefore went back and remixed the songs already online, and recorded some more, which ended up being CS’ debut album “Yay”.

Q: Who are your influences?
I listen to a lot of music, and I am always looking for new and (new) old bands to listen to. The music I listen to inspires me, so my influences change along the way. But bands like Dinosaur Jr., Sonic Youth, Galaxie 500, Guided By Voices, No Age, and Nadja have all been influences making CS’s debut album and the new EP.

Q. Make a list of 5 albums of all time.
Smashing Pumpkins – “Siamese Dream”
Dinosaur Jr. – “You’re Living All Over Me”
The God Machine – “Scenes From A Second Storey”
Guided By Voices – “Alien Lanes”
Sparklehorse – “Vivadixiesubmarineplot”

Q. How do you feel playing live?
Right now I feel great playing live, as I am very happy with the band I have. We are a three piece, we have a great chemistry, and our shows are loud and noisy. So it’s a lot of fun.

Q. How do you describe Crystal Shipsss’ sound?
Live as in the previous question. The recordings have been described as psych – pop, melodic, noisy lo–fi with references to the 90’es. All that is true I guess.

Q: Tell us about the process of recording the new EP?
I recorded a couple of songs with a friend back in 2009, which I ended up not using at the time. Later in 2011 I was in Reykjavik, Iceland, and I started remixing the recordings, and thought the result was pretty cool. So I decided to record some more songs, and make an EP out of it. Normally when I write songs, I write for a specific album project. The songs on the EP though, are a collection of songs that I for some reason, did not use on any albums. Not to be considered as b-sides though. 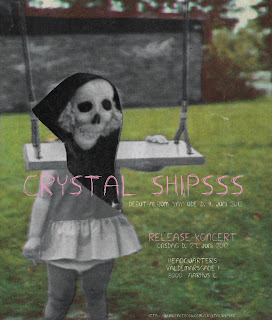 Q: Which bands would you love to cover?
Maybe Sparklehorse, Mark Linkous’ music is very special to me.

Q: What are the plans for the future?
Music wise it is to release the new EP on May 6 (May 7 in the US). Then I have the next Crystal Shipsss full-length album coming out in September. Hopefully I will also get to play some more shows with the band.

Q: Any parting words?
I would like to mention that the new EP is coming out on a limited cassette (100 copies) via Mouca (Europe) and Three Ring Records (US). Other than that I would just like to thank you for the interview!
*
*
*
https://www.facebook.com/crystalshipsss
http://crystalshipsss.bandcamp.com/
Postado por TBTCI às 07:27