Nine While Nine with Sleepmask - An Interview 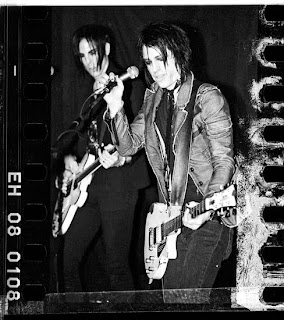 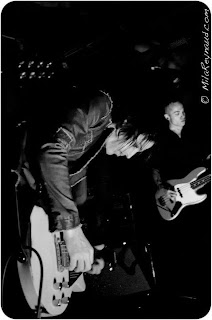 When did Sleepmask starts, tell us about the history...
mv: i began writing many of the songs that were to become the first sleepmask songs back in 2005, while i was playing guitars in one of the many bands i've been in over the years, faculty x. faculty x was and is a band with a great aggressive and edgy deathrock sound, and as much as i enjoy playing with aggression, alot of the sounds i hear in my head are more aetherial and melodic. so, sleepmask was born from my need to manifest the more beautiful and delicate sounds i wanted to convey.

I moved to nyc in 2007 for a year and when i moved back to l.a. in 2008 i immediately assembled a group of musician friends and began teaching them the material i'd written from 2005 to 2008.

I've had multiple different lineups over the years and have played alot of great shows, headlining most of them in clubs here in los angeles, and opening for some amazing groups like the chameleons, brmc, and david j of bauhaus/love and rockets fame.

I've put out 3 ep's on itunes to date and i'm currently mixing my first full length lp to be released sometime in the next few months, hopefully in tandem with a film coming out soon that i scored with my partner, producer nick launay (p.i.l., nick cave and the bad seeds, the yeah yeah yeahs et al.)

Q: Who are your influences?
mv: i really love and am inspired by my favorite influential guitarists, kevin shields of my bloody valentine, daniel ash of bauhaus, robin guthrie of the cocteau twins.. i love the sisters of mercy and siouxsie and the banshees, slowdive, and any number of 80's deathrock, gothic, shoegaze and post-punk groups beyond number..

Q. Made a list of 5 albuns of all time…
mv: oh, tough one. hmm.. in no particular order, the Sisters of Mercy: first last and always, my bloody valentine: isn't anything, bauhaus: mask, chris and cosey: techno primitiv, the cocteau twins: garlands... but really this is an impossible task, there are thousands upon thousands of records i needed to absorb to grow.. i really find myself happier reading than listening to music these days..

Q. How do you describe Sleepmask sounds?
mv: my friend guitarist andru aesthetik said it best i think, that "Sleepmask is a distinctive blend of jagged post-punk, ethereal textures and romantic sensibilities that represents an escape into the exotic realm of the senses." i couldn't have explained it any better... thanks andru! 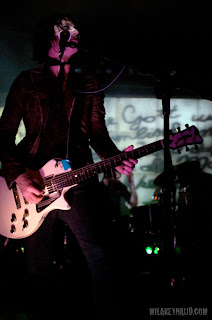 Q: Tell us about the process of recording the songs?
mv: i hear melodies in my head all the time.. once the muse starts to whisper, i'll sit down at my protools rig at home and start with a tempo, get a good sounding drum loop going.. i always lay down the bass line first, i play all the instruments myself on nearly all the recordings released to date.. i'll play the bass line, then continue with guitars, in layers, with whatever textures i feel apply.. then i'll ad synths and go back to adding drum and percussive accents. once the music is finished, only then do i begin hearing vocal melodies and working on the lyrics. singing is the last element.

Then it's on to the mixing process, i usually take my home sessions and bring them to more advanced studios for mixing through expensive outboard gear.

Q. Which new bands do you recommended?
mv: i'm sorry to say i really am out of the loop, i am pretty unaware of what's happening outside my own internal world. i am certain there are alot of fantastic contemporary peers making beautiful music, but i find i'm better off listening to the music i hear floating in space, those are the songs i reel in and record, they become sleepmask songs.

Q: Which bands you love to made a cover version?
mv: truth be told, i'm really against the concept of the cover song. most likely they are perfect as they are, and it's criminal to re-record them, unless the artist has a completely interesting and unique departure from the original. that said though, i have covered a few in my time, but more because i wanted to feel the feelings that the artist felt when they wrote the song, to relate to those emotions, for personal reasons, over thinking i have a version that's better than the original. i've covered the sister's of mercy, 'nine while nine', love and rockets, 'no big deal', which i did for a compilation record that ended up not being on that release, and, most meaningful for me, roy orbison's 'only the lonely', which i gave a decidedly shoegaze feel.

Q: What´s the plans for future....
mv: i'm currently on hiatus from live performance, i'm playing with my one of my other bands faculty x for the time being, but i'm currently mixing my first full length sleepmask LP, to be entitled "Into a Radiant Abyss.' it will have 10 to 15 new songs. i hope to release it in tandem with a film i recently scored with producer nick launay, it will be called PLUSH, directed by catherine hardwicke (13, twilight, lords of doggtown, red riding hood.) and starring emily browning and xavier samuel.

I know i'll assemble a new lineup for sleepmask later this year and hope to perform in nyc and select cities in europe, i'm much better received outside of los angeles it seems. i'd love to play in brazil and so many other countries, but europe seems to make the best sense for now, until i can get financial backing to support widespread travel.

Q: Any parting words?
mv: i'm just supremely grateful that this music has reached any kind of audience at all, it seems a miracle to me, as it's been strictly diy the whole way and has spread word of mouth over the years. the internet is such a marvelous thing, without it no one could ever have discovered my little universe of sound. thank you so very much for taking the time to listen, to care.
*
*
*
Thanks so much Ming.